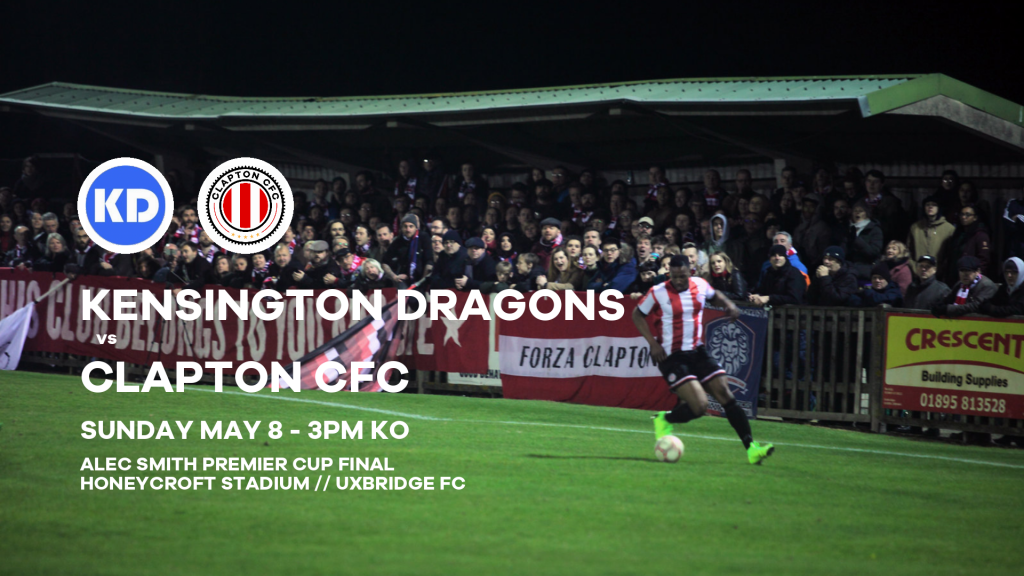 The men’s first team play in the Alec Smith Premier Cup final against Kensington Dragons this Sunday at 3pm at Uxbridge FC’s Honeycroft. Tickets are now on sale from our online store.

That’s where we played the Jim Rogers Cup final in 2019, when we edged past Hilltop on penalties.

After a season of near misses, being knocked out of a semi-final and a quarter-final and just short of top spot in the league, Geoff Ocran‘s team have a chance of silverware to end on a high.

We’ve saved some of our best performances of the season for the Alec Smith, beating Sporting Hackney 5-2 away from home, then Larkspur Rovers 6-0 and Cricklewood Wanderers 3-0 both at home.

Kensington Dragons, meanwhile, have reached the final the hard way by beating the teams in first, second and sixth in the table without conceding a goal. They beat Stonewall 3-0 and NW London 1-0 at home, followed by Brentham 1-0 away.

In fact the Dragons are the form team of the MCFL Premier, although we edged them out 1-0 at Wadham Lodge Stadium in April.

The youngsters wanted to play regular football matches and after hard work from parents and players, Kensington Dragons was formed.

The club has expanded over the years to now have eight boys’ teams, five girls’ teams and three men’s teams.

It is a registered charity and run by the trustees and a committee made up of club officers, managers and coaches.

The charity’s objects are “to promote community participation of, primarily, children and young people regardless of race, sex, creed, financial means or social and economic circumstances.”

Agonisingly there is clash of big fixtures for Tons fans on this day.

The women’s first team, in second place, take on Islington Borough, in third place, at the Stray Dog in Walthamstow at 2pm.

Although there will be one further game left, the winner will be in pole position for runners-up spot behind Bromley and a better chance of promotion.

Whichever game you choose to attend, please make sure you are louder than ever. The Comms team will keep fans updated with what is happening at the other game, too.

Kensington Dragons vs Clapton CFC is on Sunday, May 8 2022 at 3pm at Honeycroft, Horton Road, West Drayton Middlesex UB7 8HX.

Tickets are now on sale from our online store. Adult tickets cost £5 and concessions £3.50. Primary school aged children can attend for free.

You will just need to bring your booking email or order number with you to the game and show it to the CCFC volunteers at the gate.

Advanced tickets are available up until the evening of Friday, May 6. After that, you will be able to buy a ticket on the gate, but no concessions are available.

The club receives a small cut of the tickets that we sell in advance so please do book via us so we don’t lose too much money.

Honeycroft has a cracking bar serving drinks and food, as those who went to the Jim Rogers final will testify.

However, the local council forbids alcohol to be consumed at the pitchside at any game, and this final is no exception.

So you won’t be able to bring alcohol from the bar area into the stadium. If you bring a bag that is likely to be checked at the entrance for any alcohol or pyro.

In short, we all need to adhere to all Uxbridge’s usual ground regulations, which can be found here

By Tube: Alight at Uxbridge Tube Station on the Metropolitan Line and turn right once through the ticket barrier to enter the Bus Station. From the Station you can either take the U5 or A10 to the bus stop called Iron Bridge Road in Horton Road and walk the remaining 1/2 mile (10 minutes) to the ground.

By Road: Exit M4 at junction 4 (Heathrow) and take the A408 (Stockley Road) towards Uxbridge for approximately 1 mile and then take the slip road and turn left into Horton Road. Continue on Horton Road for approximately 500 yards going past the warehouses at Prologis Park West London and turn right into a Private Road (Signposted Uxbridge Football Club) opposite the Space Station Self Storage Unit. Follow the Private Road and you will arrive in the Football Club Car Park.