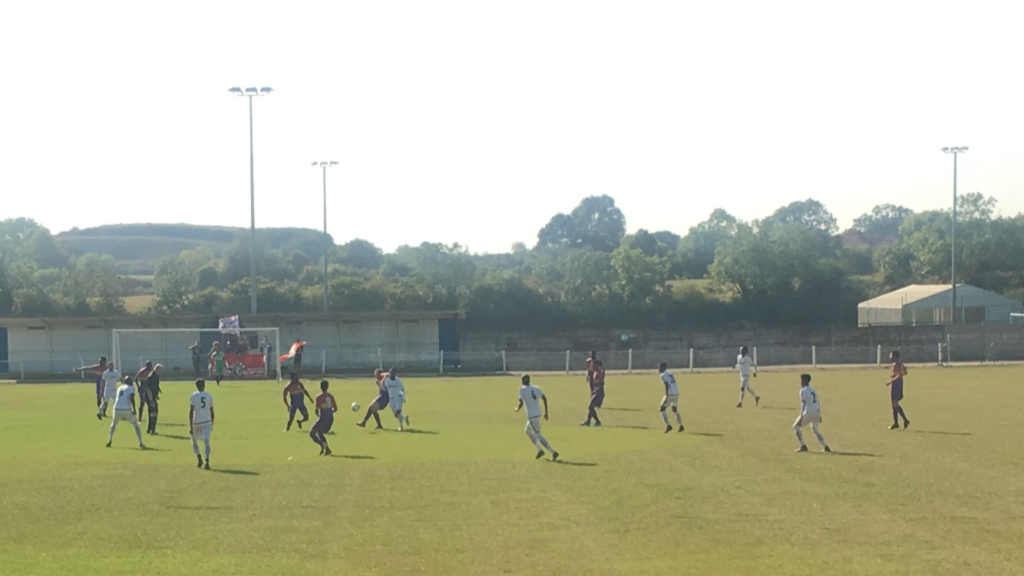 Geoff Ocran’s team came back from a tricky away tie against Hilltop on Saturday with a respectable point.

But it could have been more.

The match swung on a controversial incident where the Tons took a 2-1 lead while a Hilltop player was down injured, then stood aside to allow the home team to equalise.

New signing Marlinho made his competitive debut for the Tons after netting in last week’s friendly win over Eastfield.

And the new man had a key role in a quickfire opening goal. Noah Adejokun played a one-two with the Brazilian, bustled in from the right and fired home off the base of the post. A dream start in the unseasonably stifling September heat.

On 13 minutes Adejokun scampered through, on the left this time, but curled his shot just over the bar.

The West London side then started to grow into the game. They converted a period of pressure into an equaliser on 28 minutes, Jordy Mumbiny smashing into the net.

Just before halftime, Tons keeper Jack Francis made a good save. The ball came back out. It was driven back in. Francis made an even better save. All square at the break. Thanks Jack!

Into the second half, Hilltop continued to press. One squirmed past the post when it seemed destined for the net.

Then on 71 minutes, The Incident.

Hilltop knocked the ball out of play with one of their players down injured. Not all the Clapton players had spotted this and proceeded up the pitch. Midfield dynamo Prince Kwakye drilled in a smart finish from the edge of the box.

The Hilltop players surrounded the referee, protesting vehemently. The Tons management decided it was best to let the opposition score to even things out.

But there was again confusion in the Clapton ranks when Hilltop began knocking it about normally from kick off. Were they going to walk it in or not?

This led to the bizarre sight of some Clapton players competing as normal, while others stood still. Shortly, the right thing happened and Mumbiny popped in their equaliser.

The biggest confusion was on the terraces, where no-one had the foggiest idea what was going on.

You’d like to think, roles reversed, that they’d do the same. It would have been unsavoury to win in that kind of way and I think we’re better than that.

In the closing stages, the visitors looked more likely to snatch a winner, but there was to be no more scoring.

As with the previous occasion the teams met, it finished 2-2. A Desmond. But this time the Tons did not get a chance to seal the win on penalties.

Hear the thoughts of Geoff Ocran, Stu Purcell and keeper Jack Francis on the game and The Incident.

Hilltop manager Abdullah Mohammed was satisfied with the point on the balance of play:

I think the weather and the condition of the pitch had a great effect on the game. It was scorching outside for a late September fixture in which we had two water breaks. And the pitch surface was super hard. The teams cancelled each other out, which meant the game wasn’t really end to end. It should of been 1-1, but let me clarify why it ended up being 2-2…Our player was down with a injury and we played the ball out. We were expecting it to be played back to us, but Clapton scored from it. I spoke to the manager and the some of the guys on the field and they agreed to give us a goal back. I want to congratulate Clapton on great sportsmanship and fair play. A lot of teams wouldn’t have done that! But to be honest I think both teams deserved a point.

For a wonderful opening goal and all-round performance, Noah scoops our MoTM award.