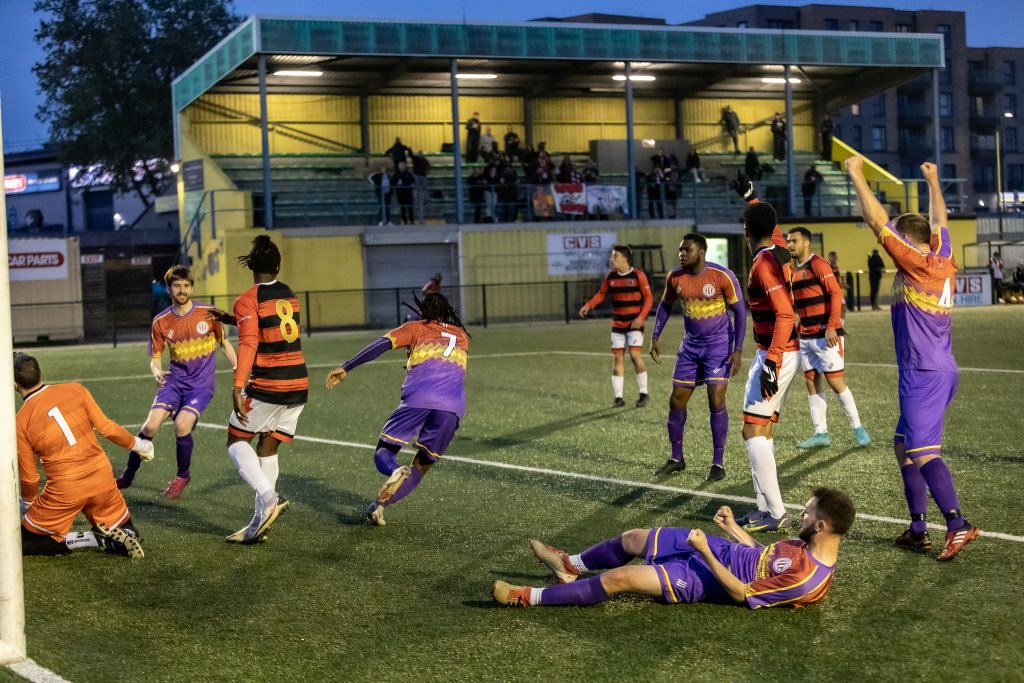 A rare midweek away game for the men’s first team saw an entertaining, if unexpected, high-scoring draw against champions elect North West London.

Trailing 3-1 heading into injury time, a quick fire double meant the Tons grabbed an unlikely draw from the jaws of defeat, much to the delight of the fans in the ground.

Whilst the last meeting between the two sides earlier in the season, in the Anagram Records Trophy, was marred by a row over the ticket prices, NW offered free entry this time around. A great gesture. Those who made the short trip to Haringey Borough’s Coles Park were treated to an entertaining game.

NW started the brighter of the two teams and went close early on as a cross-cum-shot was tipped onto the bar by Jack Francis.

The warning wasn’t heeded however as NW went in front soon after with some nice build up play leading to an easy tap in.

NW’s second had a touch of farce about it, as Charlie Fagan, under pressure from NW attackers, passed the ball back to Francis slightly too hard and left the Tons keeper with no chance as the ball went into the net.

A rare blemish from Fagan who has been impressive since coming back into the side at centre-back. Getting it out of the way before the cup final clearly!

Just before half-time is always a good time to score however, and that’s exactly what CCFC did. Samba Badjana did well to win the ball back in the attacking third before he was fouled. A Musa Manneh free-kick wasn’t cleared and Josh Adejokun poked home.

The second half was a lot more even before NW went further ahead after more impressive build up play. 3-1 and game over surely? As the game headed towards injury time is certainly seemed that way.

The Tons did pull one back, with a James Briggs corner headed in by Julian Austin.

But they weren’t done yet. A ball over the top saw the NW defence caught out by the pace of Noah Adejokun, who was unceremoniously brought down by the NW keeper. A clear pen, and the keeper was lucky to stay on the pitch.

Briggs made no mistake from the spot, and the unlikeliest of comebacks was complete.

At full time the NW players were not happy with each other, with the dropped two points perhaps proving crucial in the race for the title, although their promotion is already in the bag.

While they had it out with themselves and the ref, the CCFC players left them to it, climbed into the main stand and had an impromptu singalong with the travelling fans.

Whilst NW play some excellent football and are worthy champions, they will have to be street-wise enough to see out games like this at a higher level next season.

For Clapton CFC, an impressive comeback and good morale boost ahead of the cup final against Kensington Dragons.

Ourselves and NW have enjoyed a close relationship, including both having iconic shirts produced by Rage Sports, theirs with ‘Black Lives Matter’ on the front.

With the row over ticket prices now firmly in the past, our paths will now converge but we wish them well in the level above and hope to renew our acquaintance in due course.