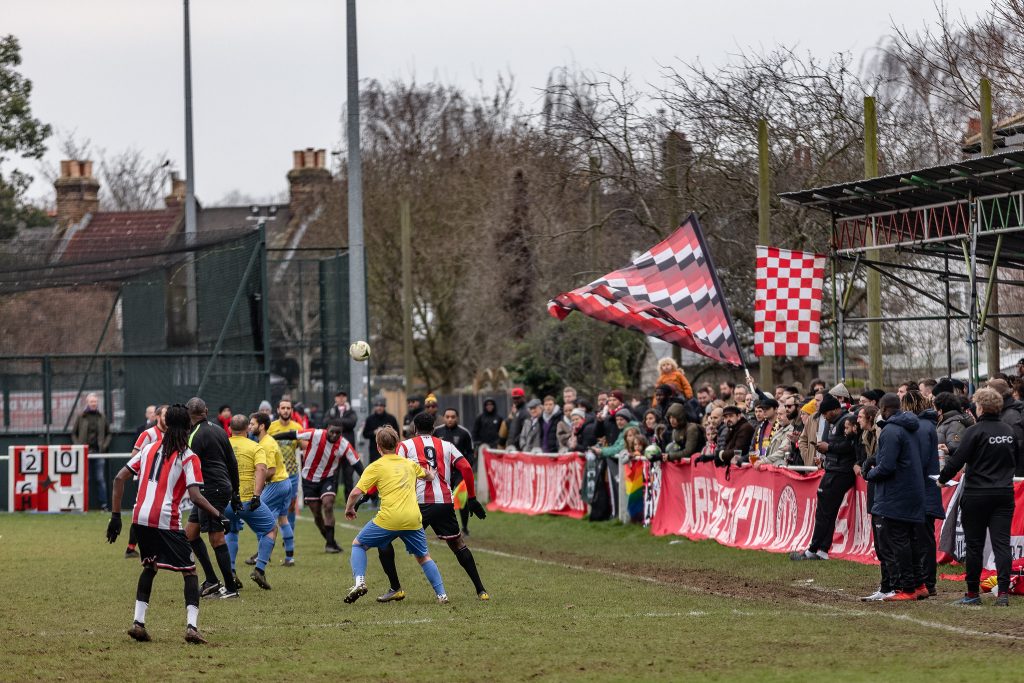 Having lost four of the last five league games, the Tons were in severe need of a return to form for the second half of the season, and this big win delivered.

There was no early sign of such a big win early on, with Larkspur going closest first, in fact the Tons were saved by a linesman’s flag when the visitors scored.

Later in the half, we survived a goalmouth scramble after a Jack Francis save. But by then, it was already 3-0.

The deadline was broken on 14 minutes. A great ball by Samba Badjana – who covered every blade of grass in midfield – released Noah Adejokun down the left.

He squared it to Arthur Wright, playing down the middle in the absence of Julian Austin, who had time to pick his spot and slot it past the keeper.

Sherwin Stanley doubled the lead on 21 minutes with a lovely valley, then on 33 minutes scored again, an absolute rocket. That’s now 53 goals in 52 games for the veteran striker.

A 3-0 lead at half-time, and there was little sense that Larkspur were going to mount a second half fight-back.

And within five minutes, it was 4-0, with a free-kick from James Briggs floated into the box and flicked on by a defender into the net. Own goal, perhaps, but it was on target so Briggsy gets the goal.

On 75 minutes, the dangerous Noah Adejokun finally got the goal he deserved, having earlier hit the post.

But the team saved the best for the last minute, with sub Fred Taylor gliding past the keeper with a drop of the shoulder and then a tidy finish.

The result sets up an Alec Smith Premier Division Cup semi-final at home to Cricklewood Wanderers on Saturday, February 26 on the Stray Dog, Walthamstow.

The other semi-final sees Brentham host Kensington Dragons on the same day, with the final due at Uxbridge FC on Saturday, April 30 at 7.45pm.

That semi date means the home league game with Indian Gymkhana – due on that day – will now be rescheduled for a later date.