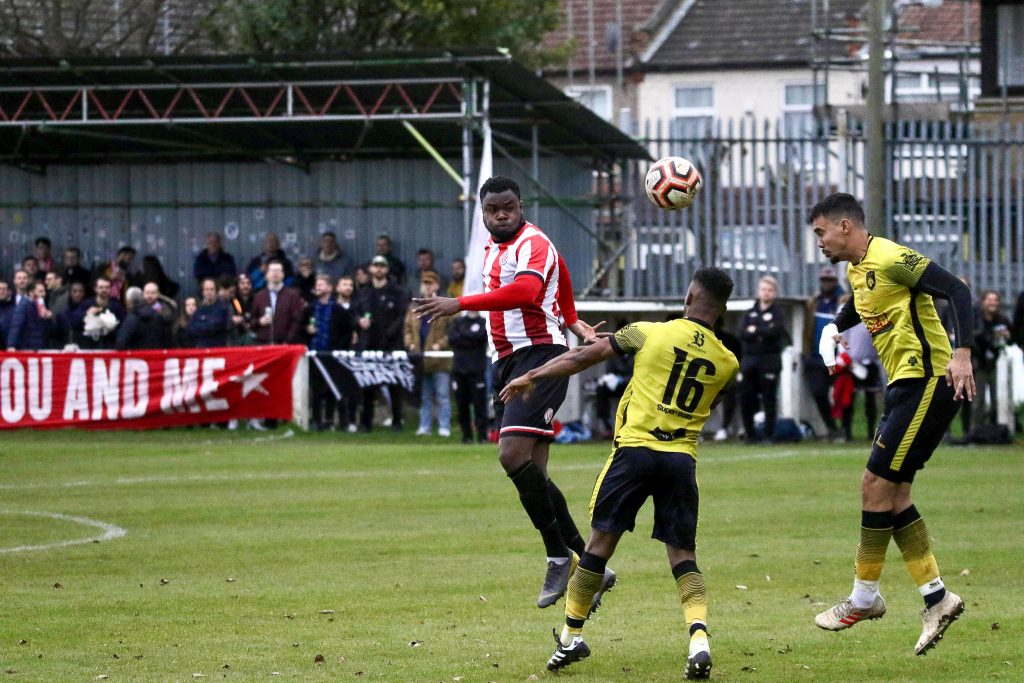 It was another feast of goals on the Stray Dog as the men’s first team returned to the top of the division by the thinnest of margins.

Clapton CFC welcomed back Jake Stevens from injury and there were also returns for Fama Sangare and Lewis Owiredu.

The breakthrough came early. On 5 minutes a long throw from Sherwin Stanley was headed in by central defender Jordan Odofin up from the back to cause mayhem.

A second came after 13 minutes, Owiredu bustling through and placing the ball out of the AEK goalkeeper’s reach.

It all looked plain sailing, but AEK hit back on the half-hour mark, with an acrobatic scissor kick leaving Jack Francis with no chance.

It looked like game on, but a sinbinning for a visiting player and then two goals in a minute, from Stanley and Stevens, made it a more comfortable 4-1 at half-time.

However, AEK gave themselves a chance on 58 minutes by narrowing the gap again, in bizarre circumstances.

A cross from the byline was deemed to have crept into the goal, with the crowd split on whether it had gone in or behind for a goal-kick.

Given some of the high scoring games the Tons have been involved in – 64 goals in 11 games – they still needed to score again to seal the points.

Stevens had a chance to do just that, but his penalty into the left corner was saved. Owiredu broke clear twice but was foiled by the AEK keeper.

AEK went down to 10 men after a straight red and it was Stanley who finally made the game safe with his second of the game, and his fourth in two games since returning from injury.

To cap off a good day, another returnee from injury Arthur Wright came off the bench to blast home the sixth in the last minute.

The four goal margin of victory was just enough to put the Tons back on the top of the table – on goals scored.

Next Saturday we play the team who are level with us, FC Soma, who beat us 4-2 on the first game of the season.

But before then, Tuesday’s big game under the lights against Stonewall FC.