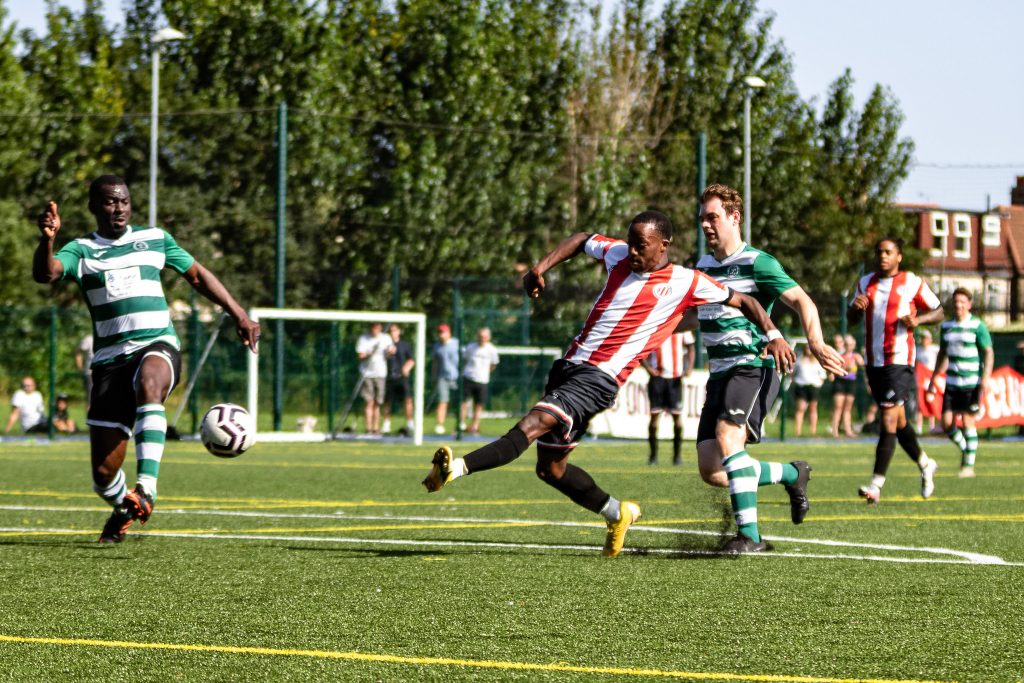 The Clapton CFC men’s first team bounced back to form with a sizzling performance in the heat over fellow Step 7 side Catholic United.

Two goals from Lewis Owiredu and one from sub Jake Stevens gave the Tons an impressive first win in pre-season over the Anagram Records Trophy holders, who beat us 5-1 in the final in 2019.

Player-manager Geoff Ocran relied on familiar faces, including development side winger Troy Cleghorn getting another start, and Fama Sangare retaining his place at right-back after a sterling performance at Barking.

Stevens returned to the bench for the first time this pre-season, and Samba Badjana was a surprise sub after being seen on crutches last week.

However, some of last season’s big names, such as Sherwin Stanley, Paul Oshin, Eliot Crosbie, Julian Austin and Jordan Odofin are yet to return for a mixture of reasons, including some injuries.

In a bright opening, Clapton CFC took the game by the scruff of the neck with Cleghorn and Yfeko both having one-on-one shots saved by the legs of the visiting keeper.

20 minutes in, and Owiredu had the ball in the net, capitalising on a wayward back pass from a Catholic United defender, only for the linesman to bizarrely flag for offside.

The visitors gradually found their rhythm and had a dominating spell, curling one shot just wide and forcing a good save from Jack Francis from a header from a corner.

After 30 minutes, the first goal finally came, on the break for the Tons. Owiredu definitely beat the offside trap this time, and gave the keeper no chance with a powerful finish.

Within minutes, Owiredu had his second, and his fourth in three friendly games. Cleghorn cut in down the right, drew the keeper, squared it to Owiredu, who still had work to do but slotted it past the covering defender on the line.

Then just before half time, Cleghorn grabbed a second assist, beating his man and crossing to the back post to be swept home by Jake Stevens, on as sub.

The second half proved to be a tighter affair, with Catholic changing their shape, and the direct heat on the Wadham Lodge 3G taking its toll.

But both Cleghorn and Yfeko shot over the bar, Cleghorn hit the bar, and the last kick of the game saw Sangare running from deep, beating the offside trap but blasting just over the bar.

After a slow start to pre-season, this was a huge return to form, and a clean sheet to boot. Ocran challenged his side to carry on that form and go unbeaten against Dunmow Town and DTFC on the next two Saturdays.