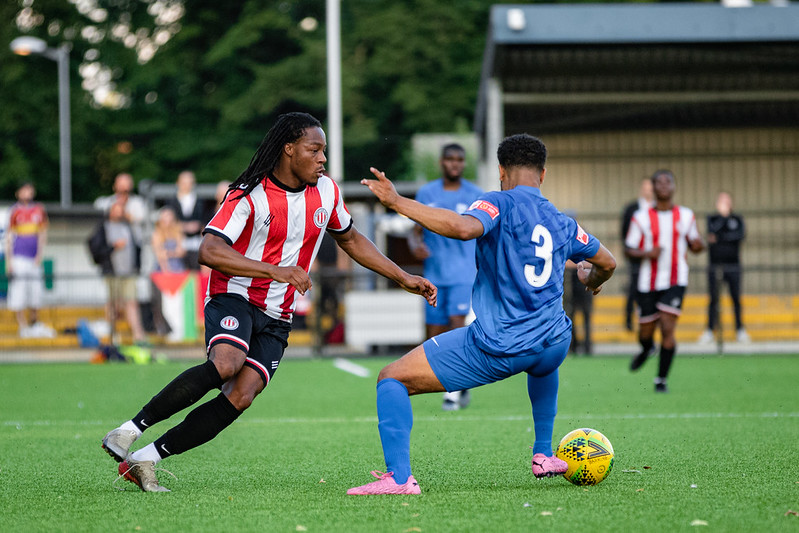 The Clapton CFC men’s first team were beaten but not disgraced in their visit to Isthmian League side Barking, three divisions higher.

A sunny evening at Mayesbrook Park – substantially improved in recent years including a 3G pitch – inspired CCFC to raise their game after bang average performances in the previous two friendlies.

Player-manager Geoff Ocran was still without some first choices but put out an experienced side including Noah and Josh Adejokun and Lewis Owiredu switching positions across the front line.

On 9 minutes, The Blues took the lead, when former Brentford, Leyton Orient and Charlton Athletic striker Charlie MacDonald found himself unmarked on the edge of the box, and dispatched it easily.

Soon after a shot fizzed over the bar, and Francis was forced to tip another over, and it looked to be a long, bruising night under the lights.

However, the Tons settled into the game, and on their second attack of the game in the 30th minute drew level. Fine work from Owiredu saw him bustle into the box, and slipped the ball low past the keeper.

Five mins later, the Tons almost had the lead. Noah Adejokun sprinted from the half-way line on the break, stormed into the box but dragged his shot agonisingly wide.

At the other end, some heroic defending saw Dean Bouho block a goal-bound shot on the line, while the impressive full-back Fama Sangare was winning a very physical battle with the Barking winger.

The Blues got their noses ahead again on 40 mins, however, with their number 7 trialist finding space just outside the box and thumping it home.

Into the second half and Owiredu almost levelled for CCFC. Noah Adejokun was pulled down by a defender with the ref playing on, leaving Owiredu to outpace his marker, to collect it first then dribble it into the box… then slot it wide.

CCFC kept in touch for most of the half, despite Barking dominating possession, and hitting the post. However, on the break, Owiredu almost levelled again, beating the keeper but not a clearing defender.

In the 70th minute, Barking finally put the game to bed, with another trialist squeezing the ball under Francis.

Nevertheless, the visiting supporters and squad seemed pleased enough with a battling performance, as pre-season properly gets into swing.