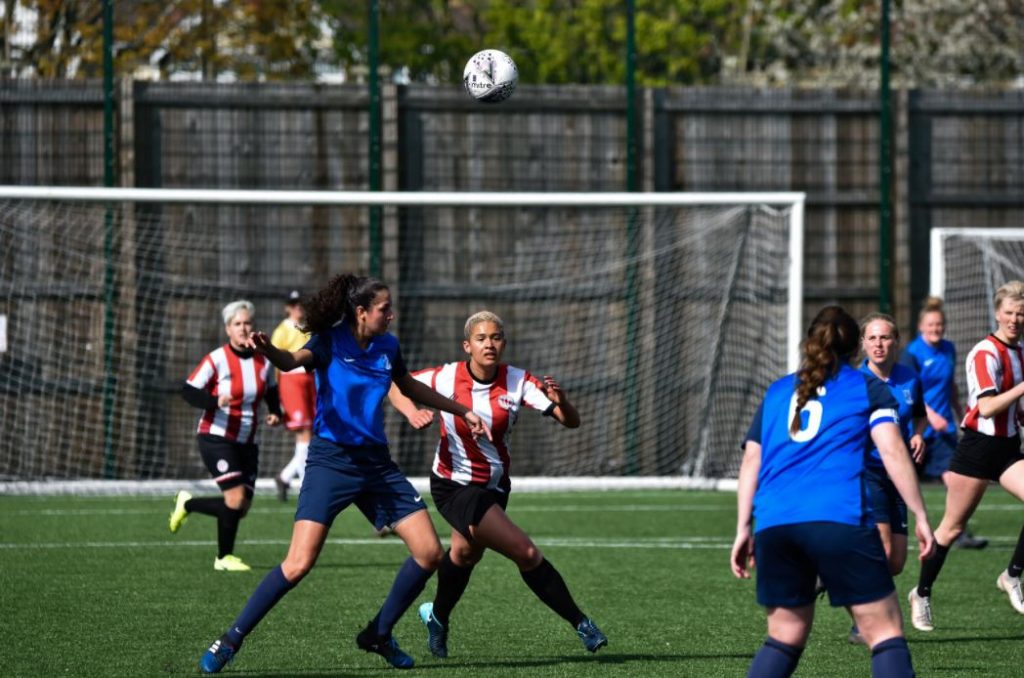 The wind was the 23rd player on the pitch as Enfield Town Reserves welcomed the Tons to their 4G cage off Donkey Lane.

With last Sunday’s outstanding win fresh in both memory and legs, coach Claudio Gomes and captain Ciara Monahan spoke before kick-off about continuing to enjoy the football.

The management team made one substitution from last week’s winning line-up. Teju Callisto made her first team league debut, replacing Larissa Vieira on the left wing.

The game had a blistering start, with three goals scored within the first 15 minutes.

At 5 minutes, Enfield were rewarded a free kick. Polly Adams initially saved it, but the Tons’ effort to clear it just wasn’t enough. The ball found the feet of a lone Enfield player who only needed to tap it into the goal for a 1-0 lead.

Only a few minutes later, Enfield were awarded a corner kick, which sailed (perhaps with a bit of help by the wind) straight into the far corner.

It didn’t take long before CCFC replied, though. The Tons were awarded a free kick 10 yards outside the box, and up stepped this season’s free kick specialist, Marta Boiro. And just like last week, there was no doubt about where the ball would end up – back of the net. 2-1.

CCFC had three pairs of fresh legs on the pitch, as Vieira had come on for Callisto at the end of the first half, and Lenny Holmes and Lucy Spours replaced Verity Phillips and Marta Boiro at the half-time break.

The second half continued much like the first. The Tons controlled the game, and Enfield were quick to take advantage of any mistakes.

Clapton had a few more chances in the second half, with Lucy Spours firing off her signature passes behind the defensive line, and Maria Mendonca being quick to pick them up.

The Tons made a few more substitutions in the second half, with Ciara Robinson coming on for Li Steiner, and Bethia Green coming on for Emily Link. A few minutes later, Boiro came back on and Monahan was given a well deserved rest, and Emily Link came back on for Alice Nutman, which saw Mendonca move back to a full-back position.

With only about 5 minutes left on the clock, Clapton was awarded another free kick. This time about 20 yards outside the box. Again, Marta Boiro’s left foot sent a fantastic ball into the box, which landed at the feet of Robinson, who had no problem finding the back of the net. 2-2.

Clapton continued to push for the last few minutes, trying to win all three points. With 2 minutes left of the game, Emily Link was served a wonderful through ball, and was left alone with the ‘keeper. But the linesman called offside. Clapton manager Gomes disagreed with this decision, rather loudly, and was shown a red card by the referee.

Last season, the Tons might have dropped their heads by being 2-0. This season no one is surprised to see them fight back with so much heart and passion.

This Sunday, Dulwich Hamlet will visit the Stray Dog. This is another game where the Tons will have to leave everything they have on the pitch.