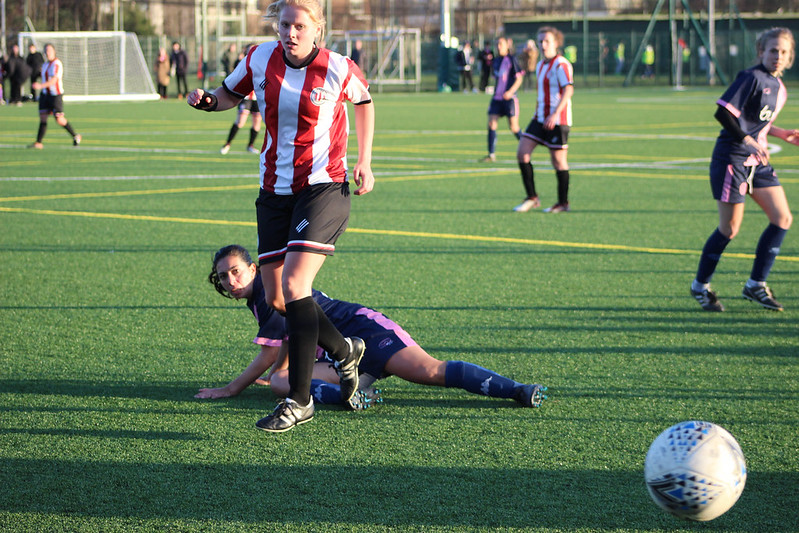 Clapton women’s long-awaited matchup with Dulwich Hamlet Reserves promised drama. The heroines and villains took to the stage. But in the end it turned into a Shakespearean tragedy, in five painful acts.

The crisp, sunny conditions were as good as London weather gets in January. Alas, the Stray Dog pitch is still hopelessly waterlogged. So the team had to use the adjacent 3G pitch for this league tie.

And in spite of Clapton giving as good as they got for the majority of the game, a five minute lapse in the first half where they conceded three goals settled the tie.

There was an early blow when Zhane Amoaten, who was due to fill in at centre back, was injured during the warm up.

So Elena Holmes took a spot in the midfield and Ciara Monahan stepped in next to Lucy Rolington in defence. A stand in for a stand in.

It was noticeable the difference the pitch made. This wasn’t the pock-marked terrain of last weekend’s match on Clapham Common or the soggy surface of our last outings outings on the Stray Dog, which is basically the Everglades minus the crocodiles.

But as a gruesome gallery of post-match photos demonstrate, this is a trade off paid for with knee skin. The artificial surface is unforgiving. There is no doubting the dedication of slide tacklers and goalie…

The makeshift defence were acquitting themselves well, limiting the tricky Dulwich forwards to tricky chances.

A Naomi Scriven break and shot straight at the keeper from a narrow angle was the best chance for the home team.

But on 20 minutes, the South Londoners took the lead. Their number eight was played through. She tidily slotted past Sophia Axellson to put Hamlet 1-0 up.

After blocking a particularly dangerous Scriven cross, Dulwich broke up the field and their left winger floated one into the box. It glanced off the bar and away to safety. A let off.

It was to be only a short reprieve.

From every attack, a goal

Axelsson made an excellent save, pushing a close range effort onto the bar. It wasn’t cleared. Clapton’s keeper palmed away another effort. But the Dulwich forward was able to prod home at the third time of asking.

From Hamlet’s next venture forward, another goal. They overloaded our defence with a quick counter, then fed their number 13 in space on the right, who rifled into the far corner.

The very next attack and it was 4-0. The ref awarded a soft-ish penalty for an alleged foul by Rolington. It was blasted down the middle by the Hamlet number eight.

The last chance of the half came to Clapton. Free kick magician Monahan sent an effort from the edge of the box just over the bar. As the cliche goes, it was probably too close.

And with that, the break came to give the Tons a chance to regroup and steady the ship.

The second half started much like the first. There was good play from both sides, without many clear cut chances.

One Dulwich attacker ran through on goal but miscued the strike and put it past the post.

Near the 60 minute mark, Emily Link used her skill to beat a defender and advance on goal. From a tight angle, she fired goalwards. The Dulwich keeper managed to block with her feet.

But Dulwich were able to deliver a final blow to the battling Tons with another clinical strike to make it 5-0.

The Tons almost hit straight back when Scriven returned a Hamlet goal kick with her head. Through on goal, Link tried to place it in the bottom corner. The impressive Dulwich keeper was able to tip it round the post for a corner.

In the closing stages the home fans were given something to celebrate when a low Scriven cross was turned in by sub Rebecca von Blumenthal.

A consolation goal the effort of the players deserved.

Note to Matchday Committee: next time we lose, immediately lock the scoreboard up in the shed to spare us the indignity of a gloating team photo!