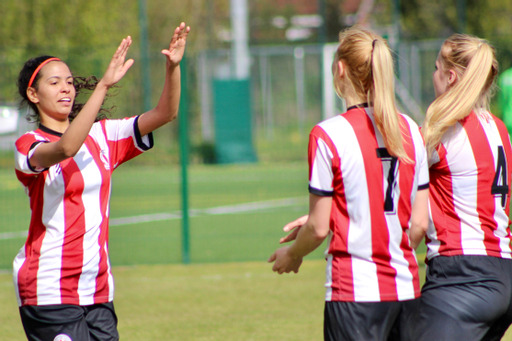 There was only one favourite on Sunday at the Stray Dog.

Walton Casuals have won every game they have played in the league – not even a draw to blot their copybook. The Surrey side also took maximum points against CCFC last season.

When Covid issues meant Clapton could not put out a side in December’s reverse fixture, the league awarded the runaway leaders with a walkover.

On Sunday, both teams managed to settle matters on the football field. And this time, against all odds, it was a walkover for Clapton. The home side notched three goals without reply, to seal one of the most impressive results in their three stop-start seasons in red and white.

Tons manager Claudio Gomes made two changes from the previous weekend’s 3-0 friendly defeat to Clapham United. He brought Polly Adams and Alice Nutman back into the starting lineup, as the league season got back up and running.

From the start, there was very little between the two teams to suggest that one was romping their way towards the title.

On five minutes, Larissa Vieira mustered a shot through a crowded penalty area, but straight at the keeper. Clapton were threatening to break in behind the Walton lines, only to be repeatedly frustrated by the offside flag.

After a water break, the Tons took a fortuitous, but deserved lead.

Vieira glided in from the left, holding a couple of Walton players at bay. She tried a reverse pass to set Emily Link through on goal. But there was too much on it and seemingly the chance was gone.

However the Walton goalkeeper was (don’t say it, don’t say it…oh go on then) too Casual and smashed it against one of her own defenders. The ball spun back into the net, shepherded all the way by Link.

Ten minutes later, the Walton goalkeeper almost did the exact same thing. Her attempted clearance hit the pressing Link, but this time cannoned straight to the feet of a relieved Walton defender.

Just before half time, Clapton went two up. Marta Boiro whipped in a delightful free kick from down near the corner flag.

It was reminiscent of the curler she she scored against Regents Park Rangers earlier in the season. Only a much tighter angle. And into the far top corner not the near bottom one.

Casuals came out after the break with an air of urgency they had been lacking. Adams did well to claw a long range effort round the post for a corner. The visitors started to get more of the ball in offensive areas, but the Tons were still threatening on the break.

On 62 minutes, the hosts benefited from just such a counter attack. Vieira broke through into the ocean of space behind Walton’s back line. With so much time to bear down on goal, she had endless options to choose from, in the end clipping into the corner.

That knocked the wind right out of Walton’s sails. While they continued to press, a swiftly-countering Clapton looked likelier to add to their tally than the visitors to cut the deficit.

Indeed, straight after the second half water break, it was almost four. Bethia Green pounced on the ball with the keeper out of position. Her lob bounced just in front of the open goal, up and off the bar. For once, the Stray Dog goalmouth area could have done with being a touch softer!

It was especially pleasing to see the Tons hold out for the clean sheet to go with the three points.

The whole back four had played with impeccable concentration to mostly limit the league leaders to long distance efforts. And Adams made sure none of those would be troubling the net, pulling off a fine string of saves.

With the GLWFL splitting the division into two to help a quick resolution, the Tons will have no reason to fear any of their top half rivals.

It’s only a shame that the fans were not able to bask in the warm spring sunshine…and the footballing brilliance radiating off the team.

Watching the Waltons on a Sunday afternoon has never been so entertaining.