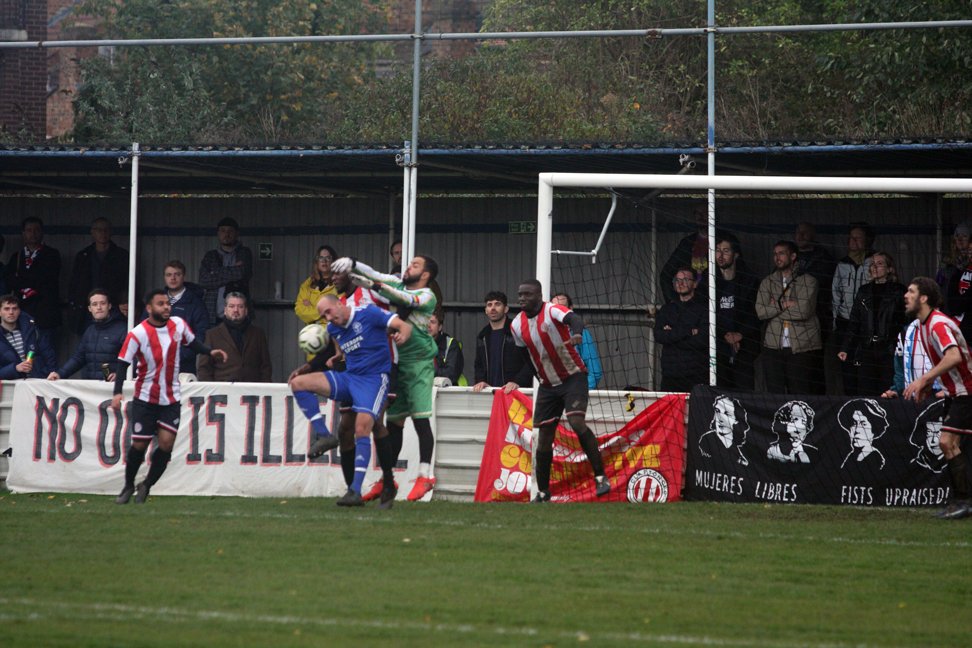 This was the third MCFL Premier meeting between the CCFC and West London’s Brentham. And for the third time the Tons conceded late to be denied the scalp of the league leaders.

Saturday’s game was a carbon copy of last season’s meeting at The Brentham Club. On that occasion, Geoff Ocran‘s side went two goals up and were cruising until a late collapse meant they had to settle for a point. Again, they will rue a couple of missed opportunities that could have had them home and hosed.

Ocran named an unchanged starting eleven from that which had bagged an impressive win at Hilltop last weekend.

Brentham seem to do well on this division mostly on the back of being big brutes.

But Clapton know how to be brutish back and from the off there were some meaty challenges flying in from all angles.

On 18 minutes, the Brentham number five chose to scythe down Josh Adejokun rather that lose to him in a footrace. He was lucky to get away with just a yellow card.

The unwritten rule of non-league refereeing is that every punishment is one level below what you see in the professional game. So what would normally be a foul means play on. What would be a yellow is a foul. And a shocking tackle like this one only gets you in the book. One has to assume that red cards are reserved for cases of on-field homicide.

Clapton’s resulting free kick seemed destined to make its way into the net, but bounced about in the box then harmlessly past the post.

But then on 25 minutes the home side did take the lead.

They floated another free kick in from the centre circle. Eliot Crosbie flicked on and Sherwin Stanley was there to prod past the goalkeeper. The kind of predatory finish we expect from the somehow-still-not-capped-by-St-Lucia striker.

Brentham probably had the better chances in the first half, but the Tons back line were holding firm.

On the half hour mark, Jack Francis did well to parry away one effort from a one on one.

At half-time, a hamstring injury forced Jordan Odofin off and so the Tons had to change their defence for the first time this season. Julian Austin came on in midfield, with Paul Oshin dropping to centre-back.

The visitors grew in threat into the start of the second period. On 53 minutes, Francis and a Brentham player both challenged for the same high cross. Neither really got there, however the ball bobbled towards the goalline. Luckily, Liam Smyth was in the right place to hoof clear.

It fell to a midfielder who tried to spank it back in from long range. But Francis has set himself again and was able to spike it over the crossbar.

So it was against the run of play that Clapton doubled their advantage.

Brentham had a throw-in near their own corner flag. The Tons hemmed them in, with Jake Stevens managing to get a head to it. Stanley helped the ball into the path of Austin who looked up and squared for an unmarked Adejokun to tap in at the back post. Characteristic decision-making excellence from Austin. Characteristic being-in-the-right-place-ness from Adejokun.

With the memories of last season no doubt hanging over the CCFC players like a great big dirty cloud, they knew they could take nothing for granted.

So they pressed on for a decisive third.

Another substitute, Lewis Owiredu, burst through on goal but was smothered by an onrushing goalkeeper. However the Brentham custodian had blatantly used his hands outside the box. As clear a goalscoring opportunity as you can get. So if you’ve been following along you’ll already know that it was punished with a mere booking. And Owiredu hit the free kick straight into the wall to compound the Clapton misfortune.

Dean Bouho, in his rough-and-tumble element in this game, made a crucial goal-saving block.

But after that the visitors launched a lightning attack down the left and managed to pull one back.

Then with only minutes remaining, another lightning attack down the left. Again they snatched their chance with all the gusto of a Tory minister taking food out of the mouth of a hungry child.

The home lead gone in little over five minutes.

But it was the Tons who almost nicked all three points in injury time. First, Crosbie headed a corner narrowly over the bar. Then right at the death, they won a free kick just in their own half. Francis strode forward to pump it into the Brentham box.

Oshin beat the keeper (who should have been out of the shower and drying himself off by this point) to the ball. But his header trickled just the wrong side of the post and the referee immediately called a close to proceedings.

It wasn’t to be this time. But our day will come.