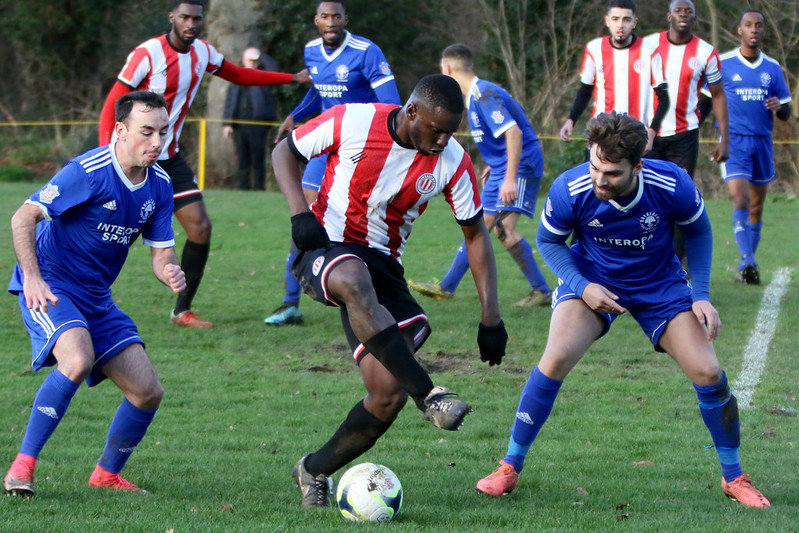 The bench flooded onto the pitch. The players went wild. The scorer stood triumphant in front of the Clapton supporters behind the goal, cupping his ears. Judging from the scenes, this was surely the greatest moment in the hundred-year history of The Brentham Club.

Perfectly understandable, as the table toppers had just secured a draw, at home, against newly-promoted Clapton CFC.

Geoff Ocran named a strong team for the first game of 2020.

The visiting fans were also buoyed by the appearance of Eliot Crosbie on the sidelines, one of the heroes of the 2018-19 campaign.

The forward is recovering from an ankle injury and will be knocking on the door for inclusion before too long.

The Tons thought they had got off to the best possible start. They got the ball in the net, but it was disallowed for an alleged Jordan Odofin push.

Lewis Owiredu had a shot over the bar, after bullying their right back off the ball. Bilal Hussain and Liam Smyth both had good efforts palmed round the post. Cemal Agdelen curled in a succession of dangerous corners, but Clapton couldn’t convert their dominance into goals.

Brentham’s best chance of the half came when Jack Todd broke through. But Jack Francis managed to save the shot without using his hands, diving backwards and trapping it under his body.

Clapton took a deserved lead in at half time. Sherwin Stanley slid in a penalty after a foul on Paul Oshin.

And they came straight out and deservedly doubled their lead right at the start of the second half. An ice cold finish from Owiredu.

The Clapton fans were scratching their heads at how this Brentham team had made it to the top of the division.

But what the hosts had so far lacked in footballing ability, they made up for in getting in the referee’s ear.

They were rewarded with an immediate chance to get back in the game when the ball glanced off Nick Loblack’s thigh off his hand.

The ref gleefully awarded the penalty, which was duly converted by Brentham top scorer Edward Clements.

Then Stu Purcell was shown a red card for swearing at another questionable decision. In fairness, the Clapton assistant manager had only told the official what he f-ing thought of him.

And with that, the game turned.

Clapton could no longer mount the slick attacking moves they had managed in the first half. Brentham menaced from a string of corners. Clements spooned one over from practically on the line.

But the pressure was building and it took one especially good Francis save to keep the Tons in front.

Then, in the dying moments, Brentham’s right winger burst free down the flank. There was an audible groan from the visiting support. They could see what was about to happen.

The man in blue fired across the box. It rolled agonisingly past a couple of Clapton defenders and into the path of Clements. Even he couldn’t miss from this range.

But even considering all the skulduggery, the Tons should have had enough in the locker to take the three points.

The return fixture in February should be pretty spicy.

We caught up with left-back Liam Smyth for his take on the contentious tie.

Jack Francis stood out again, with crucial saves in each half.