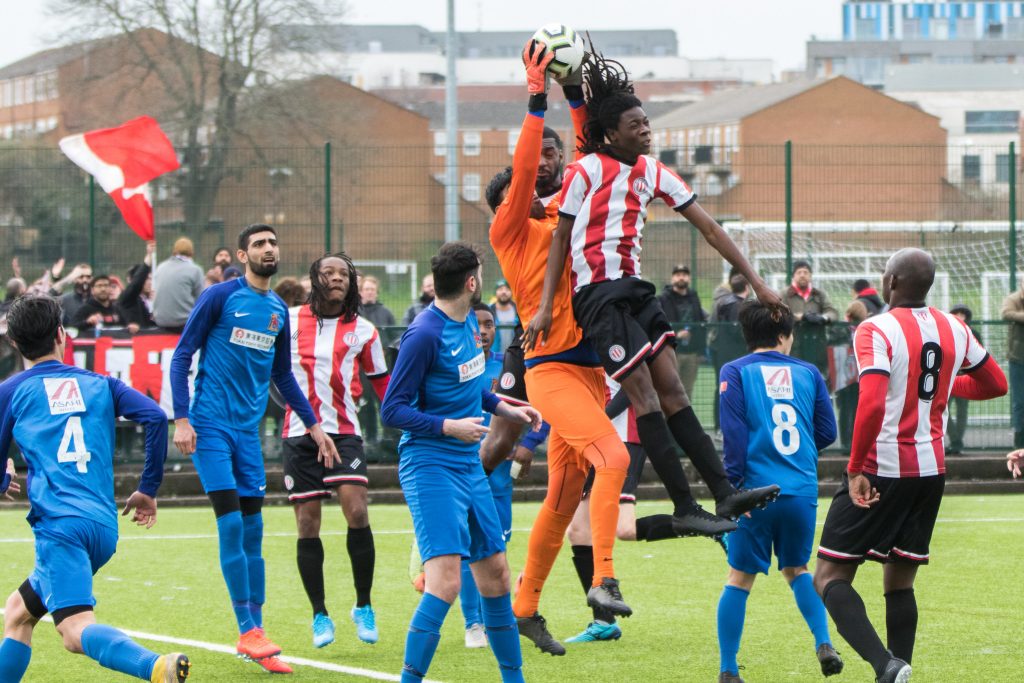 Clapton’s hopes of more cup silverware were dashed on the 3G of Mabley Green in a nail-biting penalty shootout.

Earlier in the week Clapton had returned the Jim Rogers Trophy, won in spectacular style on penalties last season.

However the spot-kick luck wasn’t on our side this time.

Due to the terrible winter affecting the Wadham Lodge Stadium pitch, this home game was moved to Hackney, the borough where the Clapton story started in the 19th century.

It also saw Clapton CFC’s first ever goal and first ever win in a friendly against Sporting Hackney in 2018.

London Samurai Rovers are one of our most regular opponents, having been promoted alongside Clapton into the Premier Division last season.

As is usually the case, this game was a tight encounter with few chances for either side in the first half.

While the play was engaging, there was only one genuine threat at either end of the park.

After 20 minutes, Clapton goalkeeper Jack Francis was caught outside his area by a long delivery from the Samurai midfield.

He had to head to cleat the ball but could only find Samurai’s number 8 who hit it just wide of the goal. A narrow escape which left the scores even.

A greater risk than either team’s forwards in the first half was the confusion sowed by balls from games on adjacent pitches coming onto the field.

Within the first 30 minutes this happened on six occasions. Those kids on the other pitches need to practice their low shots.

As the teams went to the changing rooms at the end of the first half the game was still scoreless.

Shortly after the restart the Tons were finally able to break the deadlock when a Samurai defender spilled the ball to Sherwin Stanley in their own box.

The Clapton sharpshooter was able to take advantage with a clever finish to put his team ahead.

However this lead didn’t last for long as Samurai corner led to a goalmouth scramble.

Visiting striker Shintaro Oi was able to hit the ball through the traffic to tie the game up with around 20 minutes of play remaining.

While there were some more chances for both sides – including the Tons hitting the crossbar – the score remained 1-1,

No extra time in this competition, Once again a Clapton cup tie was going to be decided by penalties.

Eleven penalties in a row were then scored as player after player held their nerve.

Finally, just before the keepers’ turn to step up, Clapton defender Jordan Odofin beat the keeper but knocked it against the post.

That ended the marathon shootout after twenty penalties and sent Samurai through to face Hilltop FC in the cup final.

With Clapton now eliminated from all cup competitions, the focus for the men’s team will be solely on claiming promotion.

The management – Geoff Ocran, Stu Purcell and Sham Darr – gave their reaction after the game..

The player-manager gets the nod.