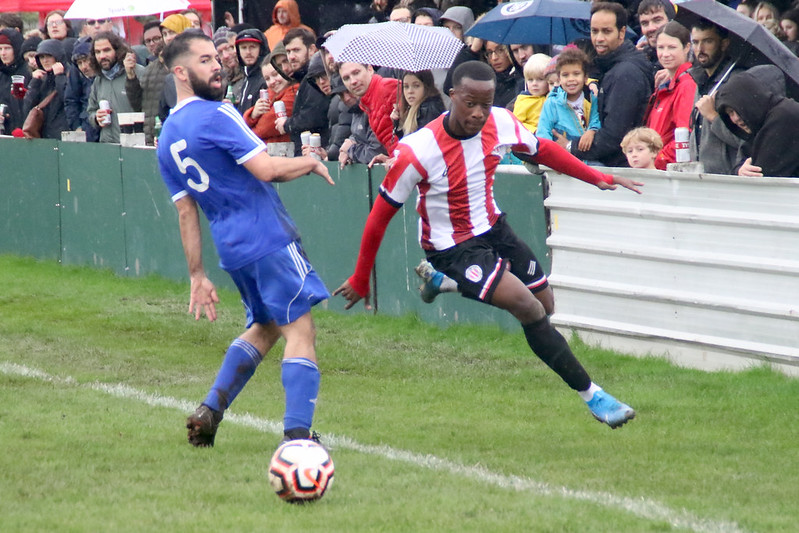 Some very familiar faces lie in wait for the Tons as we make the trip along the Thames to Barnes.

This will be our fifth competitive clash against Stonewall FC since January 2019, during which time the sides have served up some memorable spectacles.

In that first meeting, Stonewall’s ruthless finishing gave them a 4-0 home victory, with the Tons ruing the barrel load of chances they were unable to convert.

But back at the Stray Dog just a few months later, Lewis Owiredu inspired Clapton to a 5-1 home win.

This was the start of the long unbeaten run which led to us pipping Stonewall to the league title on the final day.

With both teams now in the MCFL Premier, a crowd of 909 came on Non-League Day to see Jehneil Lemonius’ stunning bicycle kick as Stonewall took an early two goal lead. However, the Tons fought back to seal a convincing 5-2 win.

The sides were then drawn in the Alec Smith Premier Cup in December. Aaron Yfeko’s curling volley giving Clapton an early lead before Stonewall levelled with the game ending 1-1.

After a marathon penalty shoot-out in fading light, Clapton emerged with a 6-5 win to progress to the semi-final.

Stonewall endured a mixed start to the league season, with some key players affected by injury in Autumn.

They are currently in 11th position in the MCFL Premier table, only two points behind the Tons, although Clapton have the benefit of games in hand.

Stonewall first team manager Eric Armanazi gave us his thoughts ahead of the encounter:

Everyone at Stonewall FC is extremely appreciative of our friendship and collective goals to rid football of all forms of discrimination. We applaud the support of Clapton Community FC, a true ally.

It was only a few weeks ago that we competed in an extraordinary cup match which coincided with the Rainbow Laces weekend and was won by Clapton on penalties after what seemed like 50 missed penalties. We wish them luck in the cup.

Since then, we have been on an excellent five match unbeaten run moving us up the table. But it is still very tight and so every point matters.

Let’s hope for another exciting game and hopefully this time we can grab a victory!

Facilities-wise, there is a small covered stand, and a cafe serving (non-alcoholic) drinks and snacks until the end of half-time.

Programmes are on sale for a suggested donation of a pound a pop. You can also request an e-version.

The nearest stations are Barnes and Barnes Bridge on the overground, both around 15 minutes walk away, in Zone 3. Alternatively, Putney Bridge and Hammersmith in Zone 2 on the District Line are about a 30 minute walk across the river.