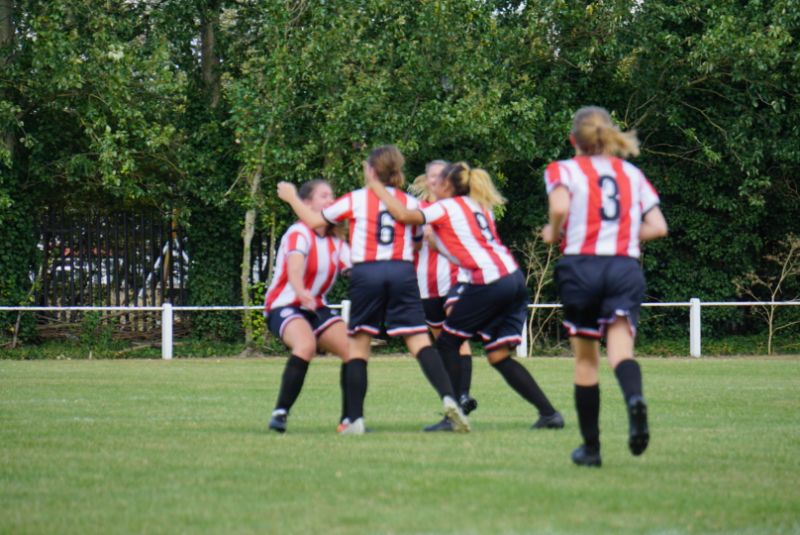 This Sunday saw Clapton CFC’s women’s team play their first competitive game, as they took on Margate FC in the Preliminary Round of the FA Cup.

The sun was shining at the Stray Dog, and despite the fact that the inexplicable traffic jam outside the ground made a fair few players and supporters run late, the air was full of excitement for what was to come.

Whilst the aforementioned delays caused Margate to start with only ten players on the pitch (with their centre back running onto the pitch a few minutes after the game started), CCFC coach Patrick McLaughlin had a big and strong squad to choose the starting XI from.

Clapton CFC got off to a dream start, as right back Hannah Wright played a through ball to Elena Holmes, who passed it to Emily Link in the Margate penalty area. After a bit of confusion, the ball rolled out to the feet of Laura Wright, whose wonder strike from 25 yards sailed over the keeper’s gloves.

As the Tons settled into the game, Margate FC took this opportunity to make their mark on the game. A nice team link up by the Bluebirds was tapped in by their number 9, Harriet Woolston.

Margate continued to press CCFC and had some good chances to go on top, with one shot hitting the bar and another corner being saved by goalkeeper Polly Adams.

The Tons regrouped and half an hour into the game, Link beat Margate’s keeper to a ball from Ciara Monahan, and slotted it in – 2-1 to the Tons.

At the end of the first half, captain Monahan steps up to take a free kick 30 yards out and expertly puts it in the top right corner to secure a 3-1 lead for Clapton before half time break.

The second half started much like the first one ended, with Clapton setting the pace of the game. The team continued to find each other’s feet with quick and simple passes, which eventually led to a through ball from Link which found Ana Holmes, who rounded Margate’s defence and slotted 4-1 into the bottom corner of the goal. Not long after, another inspired link up in play between left winger Saskia Walker, Ana Holmes and Link led to the latter scoring her brace.

Clapton made their first substitution when Lucy Rolington came on for Elena Holmes on the right wing. Rolington got straight into it and made a great impression on her first outing in Clapton’s red and white stripes.

A moment of lost concentration

After one of Margate’s players goes down injured CCFC lose a bit of their concentration, which Margate were quick to take advantage of. Woolston scored her second for the day.

CCFC’s second debutant of the day Verity Phillips came on for Walker on the left wing, and made use of her fresh legs all over the pitch.

Shortly after, Margate were awarded a corner, which Woolston headed past Adams, securing her hat-trick.

After full back Alice Nutman was booked for a harsh challenge, Clapton quickly got their act together, and pushed up the team into Margate’s half.

Ana Holmes, who was outstanding throughout the game, expertly rounded the Margate defence, her shot being saved by the Margate keeper, and Philips volleyed the rebound into the back of the net to settle the scoreline – 6-3 in favour of the Tons.

Clapton’s last substitution of the day came when Lucy Spours came on for Laura Wright for the last 15 minutes of the game, and just like in the game against Tower Hamlets, Spours provided the midfield with calmness and control.

The Tons are now through to the first round qualifying, and will be welcoming Oakwood to the Stray Dog on September 22nd at 2pm.

Head coach Patrick McLaughlin and some of the players reflected on a momentous the game.