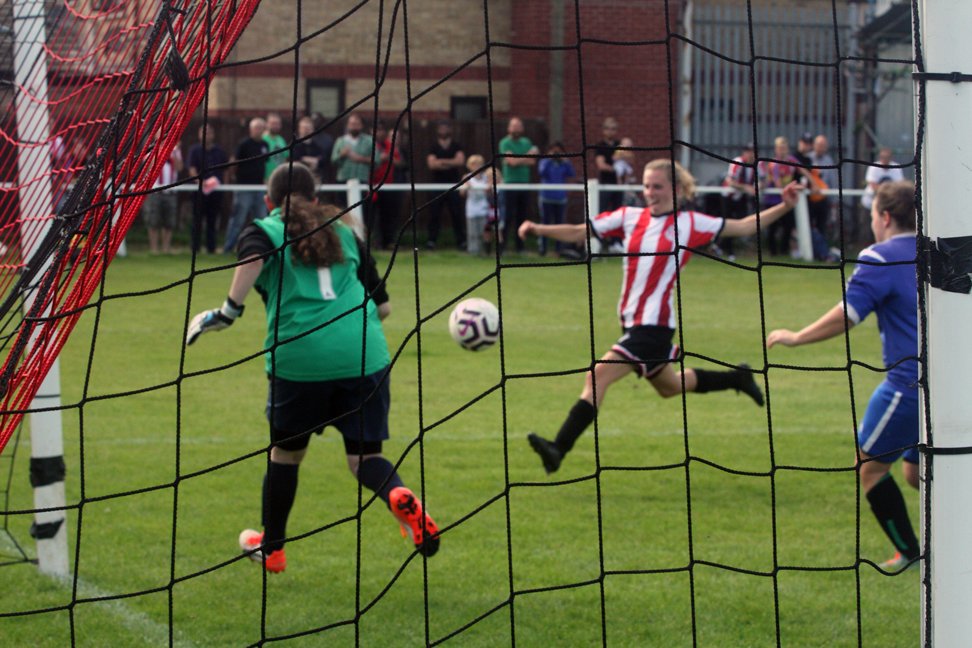 To misquote midfielder Ciara Monahan’s favourite philosopher Albert Camus, ‘we found within us an infinite summer’ as the heavy rains of the morning gave way to blazing sunshine, and a familiar battle against our old Division Two friends Tower Hamlets.

Not ones to be daunted by half the squad being away or injured, and the new coach being on holiday, Clapton women really raised their game under the guiding hand of friend and coach Josh Pugh, with both brand new recruits and old AFC Stoke Newington players all being given time to shine in the soaring heat.

The first half saw a strong start from Clapton, in red and white stripes, being spurred on for attack after attack by the ever present and oh so supportive singing fans at the Stray Dog. After a few saves from the Tower Hamlets keeper and some near misses from the ever-excellent Emily Link, the time came for an ever-excellent corner from reliable Monahan.

In a burst of pre-match inspiration, and in an attempt to counteract old Stokey habits of not making the most of corners, temporary coach Josh had decided to put stalwart centre-back Annika Quartey in the box. With the ball swooping in gracefully from the left, our very own Virgil Van Dijk caught the ball on the half-volley, neatly slotting it away for Clapton’s first goal of the day. With the tone set by defenders scoring goals, the forwards were not about to let it be the last!

Tower Hamlets attempted some fair counter attacks, passing the ball out from a strong defence on the left. But nothing today was getting past our back four. Newcomer Laura Wright was doing an excellent job filling in at centre back, forming a solid duo with the ever-reliable Quartey. This solid core left versatile Harriet Plows and Lenny Holmes free to roam as full backs who spent the majority of their time in the attacking third of the pitch.

Forming a backbone up the centre of the pitch was Quartey, Monahan and Link, with Stoke Newington’s fastest feet Zhane Amoaten making a sterling debut in our new shirt colours, providing some great short passes and really putting in the work in centre midfield.

With these players having built up a great solid central column over the years, it enabled newer players to play with more freedom. An excellent debut from Lucy Spours showed real determination and grit, and Esther Routledge continued to work hard and show promise on the right, sprinting hard to keep in balls that seemed almost certain to be going off the sideline.

It wasn’t long before all these forces came together to produce more goals. With excellent passing game being shown by our midfielders and forwards in the opposition’s box, the confident Saskia Walker continued to shine by almost walking her first goal into the box. Never one to be outdone, it was closely followed by Link sweeping a classic goal past the keeper into the top left. Monahan followed soon after with a strong strike from distance, proving she is a threat all across the pitch.

With energy flagging in the heat, last game’s keeper Sophia Axelsson was brought on for spell at right back, and showed herself to be a great asset to the team as a player willing to fill boots wherever they are needed! The defence spent much of the remainder of the half on the halfway line or over it as the rest of the squad pushed forward, putting the 4-3-3 formation to its best use as Link yet again shone with another stunning goal. 5-0 at half time.

Considering our last meeting with Tower Hamlets (when we were still Division Two Stoke Newington) was a closely fought 6-5 victory on the legendary dirt of Hackney Marshes, the second half only consolidated Clapton’s dominance over their former league rivals. After an injury to the ankle for Routledge, we were down to just 11 players, no subs, and the sun started to take its toll on the energy levels of all players.

With not much actual goalkeeping to do, “Safe Hands” Polly Adams proved to be a very useful lynchpin at the rear of defence, regularly handling passbacks with confidence and ease, restarting play from the back.

It wasn’t long before this patience in play led to more goals, with a left footed pass from Adams going out to the left wing, finding the feet of Link, who, passing players with ease, scored yet another goal high in the net.

Zhane was denied a number of times with some incredibly strong strikes going just high and wide of the goal, but she certainly made her mark on the opposition and the fans, with her seemingly magical ability to keep the ball glued to her feet, outwitting all opposing players. The rest of the half became something of a formality with two more calmly tapped in goals from Walker, and a final header (a rare event indeed) from Link brought the score to 9-0, leading to a scramble from the scoreboard gang to find a big enough number…..

We look forward to the rest of the season and thank the fans and committee for all their support and hard work in welcoming us to the club.

We are sure that the matches will get a lot more challenging as we enter Division One for the first time, but to return to the words of Albert Camus “no matter how hard the world pushes against me, within me, there’s something stronger – something better, pushing right back.”

See you all for the FA Cup clash against Margate!