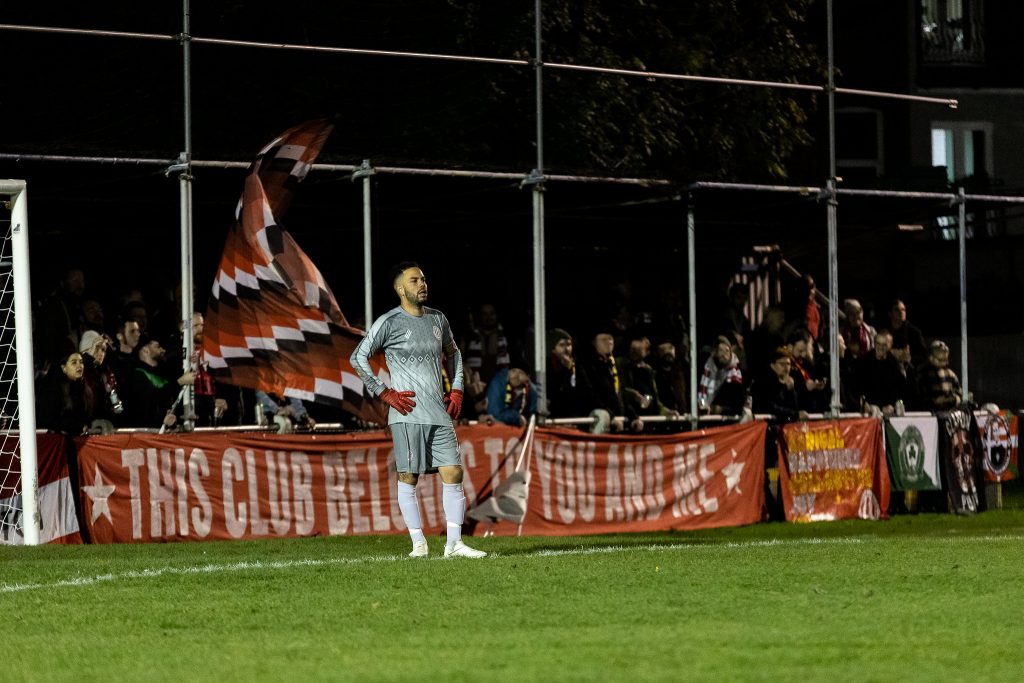 Clapton/Stonewall under the mid-week lights, surely this is set up to be an absolute ripper of a game.

There is something magical about going to watch football at night, the smell of food wafting across the roads leading up to the floodlit pitch.

Faces coming out of the shadows, as the light from the nearby off licence cascades upon 4 Stonewall fans locked out because a rogue bottle of Corona had fallen and smashed minutes prior. Corona being at fault for a delay? I haven’t heard that before.

To say I was excited about the game would be an understatement. The last time Clapton had played underneath the lights was out in Barking, and that game had one of the most memorable second halves I can remember. This is quite miraculous, as I remember a fair few beers being involved.

The game kicked off two minutes late, with a long ball square into Jack Francis’ capable hands. This led to several Clapton throw-ins in quick succession, followed by a couple of testy minutes for the Clapton defence as Stonewall began to lay the pressure on thick. Thankfully, nothing came of it but it laid the groundwork for what was to come for the next 90 minutes.

One of the more brilliant plays of the evening came from Jake Stevens (11), as he intelligently took on three Stonewall players, finally being expertly tackled by the fourth. Which led to the ball coming to the feet of #11 for Stonewall, one swift kick later and a lucky deflection meant it was a close call for Clapton.

The game was electric until a meaty tackle from James Briggs (31) on Stonewall’s Jay Lemonius (7) halted play. Then from one number 7 to another, Josh Adejokun’s Maradona-esque run into the Stonewall box brought the Clapton fans to the brink of ecstasy only for Stonewall’s keeper to re-enact a bad Peter Shilton impression by being extremely good and diverting the ball off for a corner. I’ve watched a fair amount of Clapton games and this run will stay in my memory forever.

Minutes later, screams from the Clapton players for a penalty as accusations fly that one of the Stonewall defence manhandled the ball, they fall on deaf ears and play continues and the ball goes for a corner. Which unfortunately comes just of the head of J. Adejokun at exactly the wrong angle to go just over the crossbar.

Stonewall’s answer to Kevin De Bruyne then sends a beautifully weighted and flighted pass across the pitch for it to be cruelly ruled offside.

Two minutes later, history repeats itself. Briggs (31) goes peak Roy Keane and crunches into Lemonius (7) again. No cards are shown but the free-kick from Stonewall’s  #2 is deflected and opportunistically falls to the feet of Stonewall’s #7. Francis’ quick thinking means it comes to nothing, but it was close.

Arthur Wright’s (11) footwork through the middle of the pitch following the close call is insatiable for the crowd, who are lapping it up. Unfortunately, nothing comes of it but it’s still magnificent to watch.

Another close call! Stonewall’s #22 hitting the side-netting following an excellent ball in from #7.

Clapton then turns the screw and we start to see more pressure piling in on the Stonewall defence. It’s real East London Tiki-Taka time and if it wasn’t for the superb defending of Stonewall’s #2, we would’ve seen a goal but we get a throw-in instead. Surely, this is our time?

Long-throw! Goalmouth scramble and….heartbreak. Nothing comes from it.

Football is a game of two halves after all, right? and following the near-elation of the Clapton fans comes Stonewall’s chance. Stonewall’s #7 flies down the wing and is one on one with the Clapton captain Francis. He shoots! He SAVES!

Heart in mouth stuff, or squeaky bum time to quote my mum.

The next ten minutes are the Jack Francis show. Corner follows throw-in follows corner for Stonewall and the man is a wall, nothing gets past him.

As we come to the end of the first half, there is a ball into the Stonewall box, a rogue strike and BOOM! The crowd goes wild. However, cheers become jeers as eyes notice the man in black on the far side of the pitch, the flag raised. Off-side.

The second half kicks off with a Stonewall shot right across the Clapton goalmouth from Stonewall’s #8. I’m a biased Clapton fan but even I thought it deserved to go in. Sometimes luck isn’t on your side I guess.

Minutes later, there’s a Clapton freekick from Briggs (31) into the Stonewall box and there are bodies everywhere. Nothing comes of it but I counted 4 Stonewall players that had fallen over.

Then a driving run from #16 for Stonewall into the Clapton defence. Some quick defending and the Clapton fans can breathe again.

This moment of relief is short-lived as 5 minutes later, Stonewall are granted a corner. Stonewall’s #3 takes it perfectly and somehow #11 for Stonewall misses the net from 1.5 metres out and skies it over the bar. Proper 90s football stuff that, and I love it.

The onslaught from Stonewall is relentless until the end of the match but Clapton’s defence holds strong. There are a couple more yellow cards but for the most part, the game begins to fit the final scoreline, 0-0. All square. Which is only fitting considering our friendship with Stonewall.

The nil-nil is nothing to scoff at though. We’re still unbeaten at night.