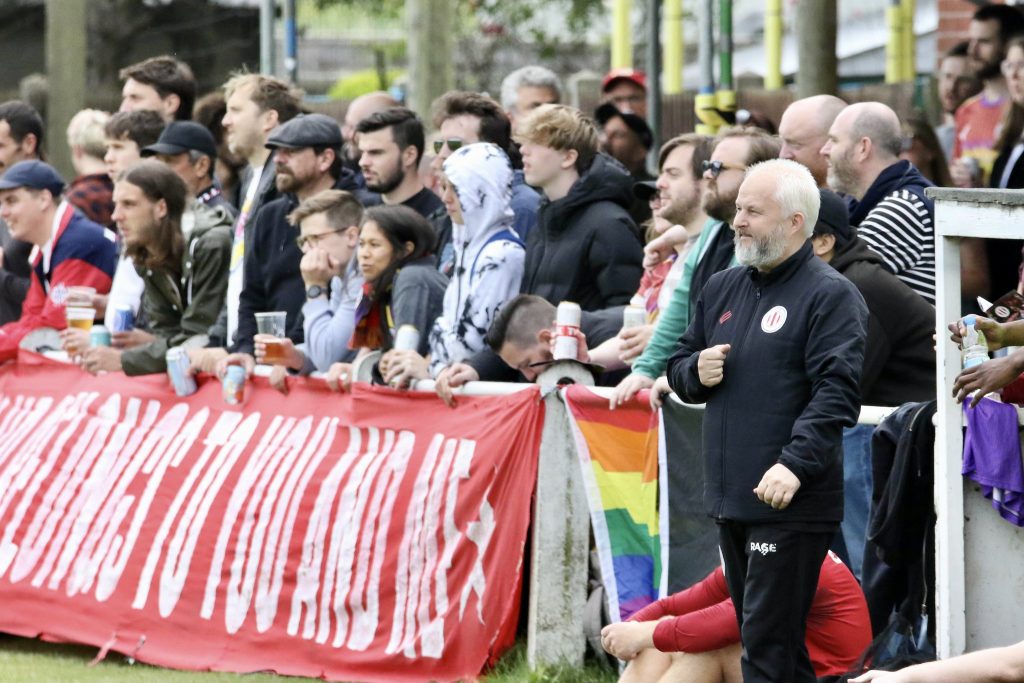 The Clapton CFC men’s first team are back on home turf on Saturday for the first time in six weeks looking to get back to the top of the league.

It’s been a stop-start autumn with away days, cup ties and injuries but the Tons are still in second place on goal difference behind FC Soma but with two games in hand.

It’s the start of a huge week as we then host Stonewall FC on Tuesday, November 9 under the Wadham Lodge Stadium lights before then heading to Soma, who demolished us 4-2 two months ago.

CCFC’s biggest game, however, is next Sunday when the women’s first team play Bedford Ladies FC in the Women’s FA Cup first round proper.

This will be our second game against AEK London – although the first one with spectators allowed. In May we beat them 3-0 in the post-season mini-league after the Middlesex County Football League season was abandoned due to Covid-19.

However, AEK ended up winning the six-way Super 6 League after the Tons dropped points in draws against Stonewall and Sporting Hackney.

Like us, AEK started this season fantastically well, going the first five games unbeaten. They beat Stonewall and Wilberforce Wanderers (although that was later awarded to the opponents) and drawn with Sporting Hackney, AVA and NW London.

There followed three defeats in a row, but last week they bounced back to form with a win in East London away at Stonewall.

AEK London are a largely Brazilian heritage side but with a name, colours and badge that pays tribute to the famous Greek side.

They joined the Middlesex County Football League in 2015/16 in Division One, finishing seventh, fourth and second in the next three seasons.

For 2018/19 they joined forces with Lopes Tavares FC, from the Essex Alliance League, to form a team that was promoted into the Thurlow Nunn South (Step 6)

That union only lasted a season, at the end of which LT renamed themselves Athletic Newham. They have since been promoted to Essex Senior League, Step 5.

With the win in the Super 6 League, however, they managed to successfully apply for promotion and are more than holding their own at this level.

Clapton CFC vs AEK London is on Saturday, November 6 2021 at 2pm at the Stray Dog, Wadham Lodge, Kitchener Road, Walthamstow.

Advanced tickets are not needed, you can just turn up.

Entry as usual is free but with donations on the entrance welcome, with a suggested £3 for waged adults.

Hot food from Caribbean Kitchen will be on sale. They have meat, veggie and vegan options and they accept both card and cash payments.

The Matchday Centres bar will be open.

There will be a bucket shake for the St John’s Soup Kitchen and Foodbank at the game.

The Soup Kitchen at St John’s in Brownswood has supported a diverse community in the Finsbury Park area since 2014.

We started life as a small weekly offering of hot soup to approximately 15 guests. Since the pandemic, our cause has mushroomed into a foodbank and provider of hot meals now running twice weekly to 100+ guests plus a clothes bank.

Unfortunately, the complete removal of grants means that we are unable to provide the same level of service as we were but the demand for our services in the area remains consistent.

We are relying on donations and fundraising like the Clapton game today, particularly critical during the Winter months.

Just a small donation can help us reach our goal for St John’s N4 Soup Kitchen to be able to continue its invaluable support.

Make a donation | Become a volunteer |. Become a partner | Twitter

It’s always been a privilege to be part of the Clapton family. Combining football and community is an extremely powerful movement and I’m grateful we are one of the best clubs in the country when looking to and supporting deeper societal issues. Having seen the need for funding and resource first hand – any support or contribution from fans/members would be incredible.