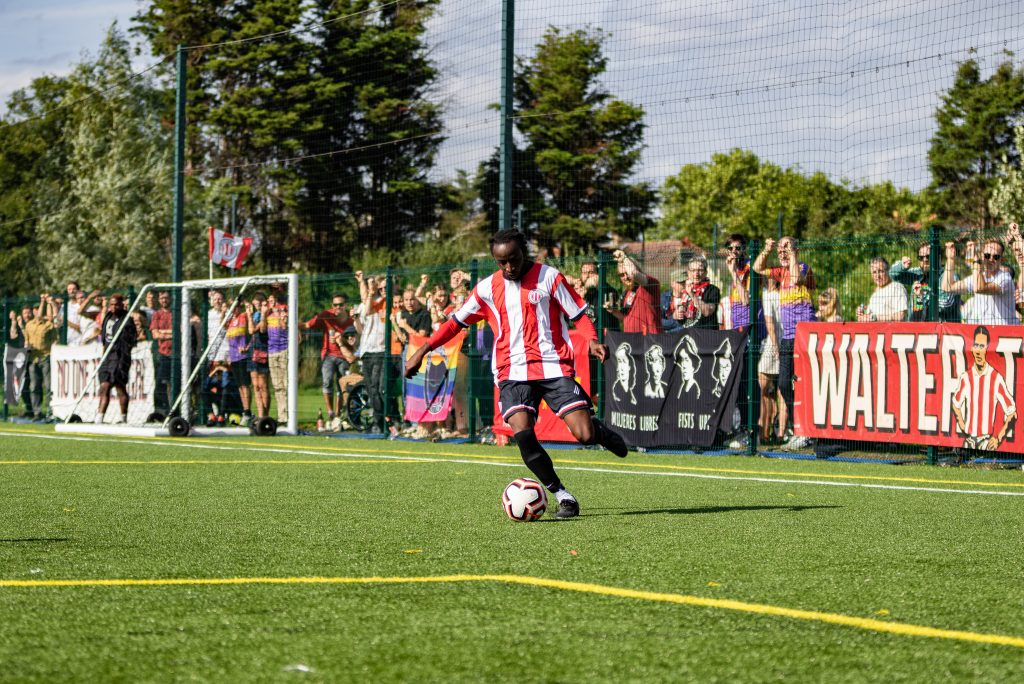 Clapton CFC’s men’s first team lost their opening home game for the second season in a row, this time against an energetic FC Soma side.

After the high of the FC United of Manchester trip, there seemed to be a widespread worry that we could see a low when back to the bread and butter of the league.

And so it proved with a below par performance against newly-promoted FC Soma who deserved the three points.

The intention seemed to be to steamroller Soma right from the start, and the Tons were camped in and around their box for the first ten minutes without a breakthrough.

A CCFC goal seemed inevitable, but then came the first sucker punch, with Soma scoring on the break. And then an almost identical goal within minutes, despite strong appeals for offside.

Indeed it could quickly have been 3 or 4 with a strong penalty shout, a good save from Jack Francis, a wasted free header from a corner, and a striker shooting too firmly and over the bar.

The cause wasn’t helped with Tafari Nicholas limping off injured, joining his centre-half partner Jordan Odofin, midfielders Julian Austin and Paul Oshin and attacker Jake Stevens on the injury list.

Throw in the absent Liam Smyth, Sherwin Stanley and Eliot Crosbie and there’s almost a full strength side waiting to return.

But that’s not an excuse, Ocran’s squad has strength in depth, and one of the new stars threw the Tons a lifeline In the last few minutes of the half.

Minutes after Arthur Wright forced a save with a shot cutting in from the left, he tried again from the right, this time his low drive just evading the Soma keeper.

So 1-2 at half-time after an admittedly wobbly performance, but game on. 45 minutes to put it right. Ocran shored up midfield by bringing himself on for a slightly deeper role, and Lewis Owiredu for more pace up top.

Once again the Tons started the half in dominant fashion, with Josh Adejokun‘s shot just bouncing wide, Owiredu shooting just wide of both posts, and Wright grazing the post and into the side netting.

So close to equalising – if the goals were a yard bigger we’d have scored four times – but clearly not close enough.

Just like the defeat at home to Indian Gymkhana last season, FC Soma defenders and keeper were throwing their bodies on the line to keep the Tons out.

And in a copy of the first half, FC Soma hit us twice on the counter-attack in quick succession. 1-4 and game almost over.

A mini-revival saw sub Aaron Yfeko finally grab one back with 10 minutes to go, 2-4, then Owiredu went agonisingly close to narrowing the gap. At 3-4 with 8 minutes or so to go, who knows if the game could have swung.

But that was the end of the chances, Soma saw out the game comfortably for a memorable and deserved win in their first game at Step 7.

The Tons will need to work on their organisation, and their composure to break down away teams, if they are to challenge for promotion.