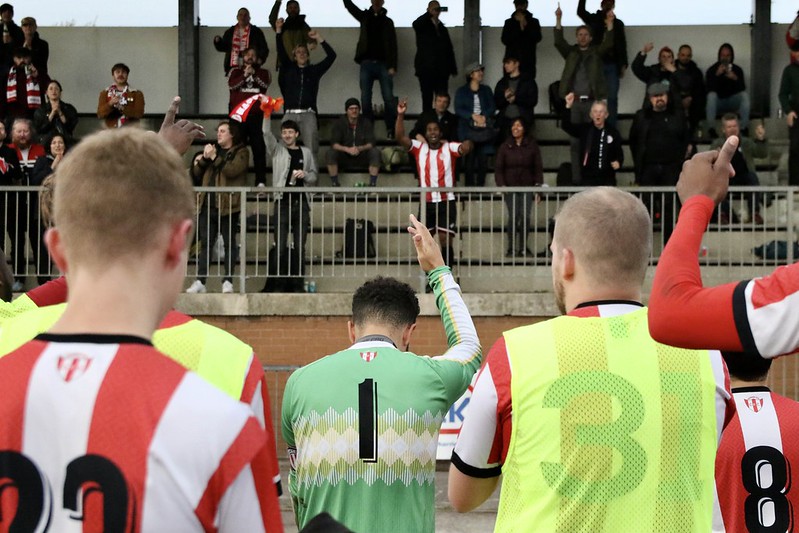 On Saturday, Clapton’s men’s team went into the Dragons’ den. The Dragons were not willing to invest any goals and the Tons came out with a 100% share of the points.

Key for Geoff Ocran‘s side was to get back to winning ways against the second bottom side, after last weekend’s disappointment against bogey team Indian Gymkhana.

In the absence of the goals and assists provided by the likes of the absent Adejokun brothers, Arthur Wright, Lewis Oweredu and Jake Stevens, the Tons needed to find some other ways to unlock the home defence.

Luckily they had that in two men who have recently come back into the fold. The dead ball deliveries of James Briggs and clinical finishing of Sherwin Stanley had the game sewn up a little over halfway through.

B of the bang

The home side were actually faster out of the blocks in the Linford Christie Stadium.

There were a couple of early let offs before Clapton had their first chance. Setting one theme of the game, it came from an arrowed Briggs free kick, landing in the danger zone between keeper and forwards. But no-one in red and white could extend a leg to connect.

On 13 minutes, some tidy work from Briggs and Ocran in the centre of the park set up Fred Taylor for a shot against the base of the post.

Taylor was giving the Dragons defenders plenty to think about. Five minutes later he hustled and bustled his way down the right hand side of the box and cut back for Stanley. The striker squeezed it under the goalie to give the Tons the breakthrough.

On the half hour mark, the hosts had an opportunity to get even with a free kick on the edge of the box.

Some eggheads somewhere must have done a study on the relationship between the time taken to take a free kick and the likelihood of it being blasted into the wall. Surely the longer taken the more likely. Kensington took an absolute age to take this one. They blasted it into the wall.

Towards the end of the half, Stanley had a free header right in front of the goal. Uncharacteristically, he headed straight into the keeper’s arms.

But then when the goalkeeper spilled a very, very long range Briggs free kick, Stanley was there to make amends.

Tons in at 2-0 at the break. This was probably deserved for having taken their chances, but it was a very scrappy affair. Quite often the ball would just be kicked up very high in the air for no apparent reason.

In the second half Reece Bartholomew came on and was giving the Dragons’ defence new problems with his direct running.

In the 53rd minute, Stanley treated the crowd to his other superpower – the pinpoint long throw. He hurled one in from the right that pretty much landed on Taylor’s boot. He tapped home to get a much deserved goal and essentially finish off the tie as a contest.

Then the silliness started.

Briggs popped a corner kick off the top of the bar.

Then when Taylor was fouled in the box, set-piece master Briggs stepped up to take the penalty. He shot low to his left and it squirmed under the keeper. Cue the Joy Division classic.

Having possibly lost a bit of interest on the contest on the field, one Clapton fan wrapped himself in a flag and departed on a run round the track. Huffing and puffing down the straight, the crowd roared him over the line. Then they demanded: ‘ONE MORE LAP! ONE MORE LAP!’ Round he went again.

In stoppage time, Jack Francis did a theatrical barrel roll when he saw a rare Dragons effort was passing the other side of the post. He had to do something to entertain himself (and the fans). The whole game, the Clapton keeper only had routine catches to make.

It was an important performance and result, to make sure last weekend’s loss was merely a blip. The victory puts the Tons second, only behind FC Soma (who have played two more games) on goal difference.