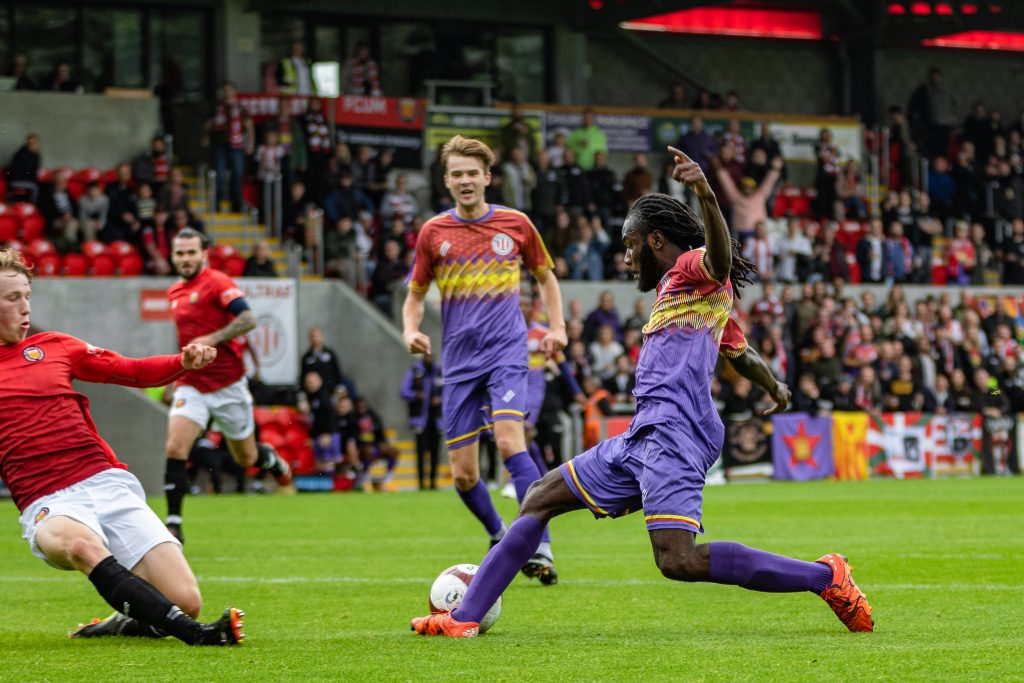 The Middlesex County Football League Premier Division 2021/22 season begins with the visit of one of four promoted sides.

We lost Hilltop and London Samurai Rovers to promotion but the division is now up to 16 teams with FC Soma, AVA, Wilberforce Wanderers and AEK London being moved up.

While we await the return of football to the Old Spotted Dog Ground – currently due in January – both our men’s and women’s teams will start the season at Wadham Lodge.

We’ll be playing across their pitches and this is the first of three consecutive home games for the men’s first team.

Unfortunately we’ve had to switch this one from the Stray Dog to the adjoining Wadham Lodge 3G due to a waterlogged corner of the pitch but all other match details remain the same.

Player-manager Geoff Ocran’s side have been putting in some impressive pre-season performances, ending with the 5-2 defeat at FC United of Manchester.

With many of last season’s squad returning, we were only really looking at adding a few players to freshen things up.

Noah and Josh Adejokun, Samba Badjana and Fama Sangare have also looked really sharp so far and it’s great to see them develop as players since last season.

I’ve always stressed that our home form needs to be impeccable for us to push for the title.  FC Soma are a bit of an unknown quantity but we are confident.

Here’s what we do know about FC Soma. They are a youth and mens football club based in the London borough of Camden.

They have been promoted this summer after lying top after six games in the MCFL Division One Central & East – the same division we won in 2018/19.

FC Soma joined the league in 2019/20, meaning they’ve had their only two seasons abandoned, and this will be only their 18th league game in their history due to the pandemic.

For this season they’re on the move. Their home ground is no longer Chase Lodge Playing Fields (Tottenham Hotspur’s former training ground) and instead they’ll be based at a new 3G development at Bannister Sports Ground in Harrow.

This summer they appointed Mansor Omar as their new manager at the young age of 28 and beat AVA – another promoted side – 2-0 in a friendly.

Clapton CFC vs FC Soma is on Saturday, August 14 2021 at 3pm at the Wadham Lodge 3G, Kitchener Road, Walthamstow.

Entry as usual is free but with donations welcome, with a suggested £3 for waged adults, You can donate either online in advance or on the day.

In other words, advanced tickets are still on sale but are no longer compulsory. If you do get an advanced ticket, please have the details on your phone or printed out so we can pass you through quickly.

The Matchday Centres bar will be open from 1pm, please follow their signs as a one-way system is in operation. You can take your beers out to the pitch, of course.

We won’t have a foodbank collection this week but hopefully it resumes next week.