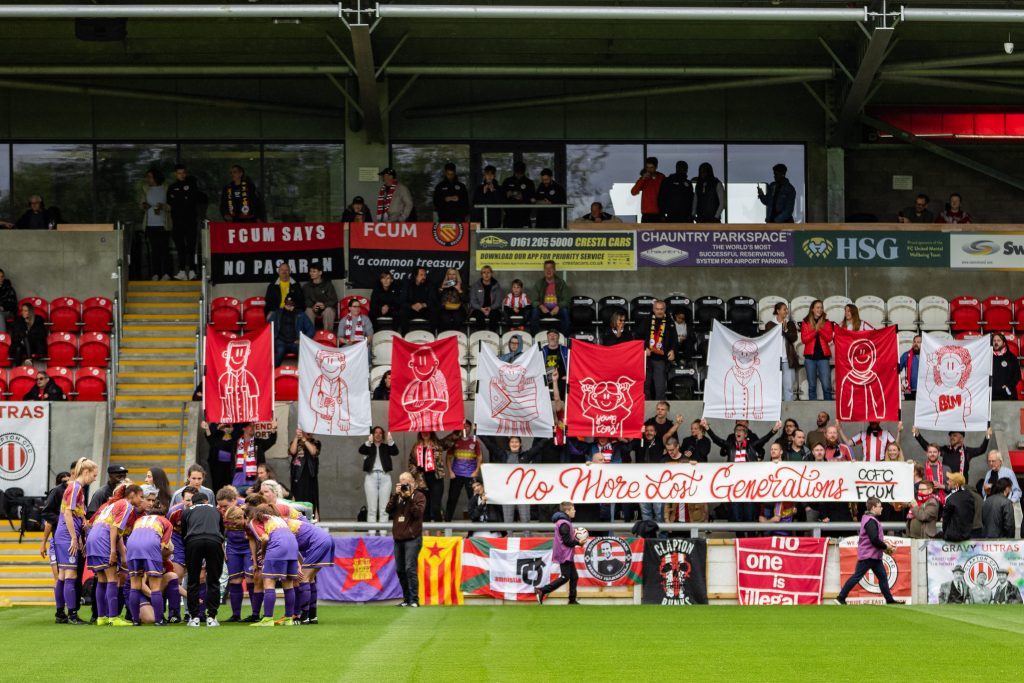 Pre-season results are not important, but never more so than on this occasion.

Off the pitch, our double-header in Manchester was about making friends and seeing the possibilities of a club who have been doing the fan-owned thing for 16 years.

On the pitch, the gulf in levels showed in the final results, but not without some truly unforgettable moments of magic from the Tons players. Three moments, in particular.

With no trains running, three coaches of players and supporters travelled from East London at daft o’clock in the morning. More joined us from all corners, from Bury St Edmunds to Portsmouth to Glasgow, and everywhere in between.

Around a third of the 694 crowd were there to support the Tons, and didn’t stop singing from minute 1 to 180.

The main event was the women’s teams contesting the Football Supporters Association trophy. The clash marked the 100th anniversary of the FA’s ban on women’s football and 50 years since that came to an end.

In the first ten goalless minutes, Lucy Spours threaded through a ball to Emily Link that she was inches away from poking it past the keeper.

At 1-0 down, Marta Boiro surged into the box, beat two defenders, but couldn’t find an angle for a clear shot on goal, and after falling in a collision, the penalty appeals were waved away.

In truth, though, fourth tier United started on the front foot and never let up throughout the game.

The standout in red was their number 11, captain Kirsty Chambers, who set up the opener for Olivia Smith and scored a second. Another goal from Smith and two from Ella Hartley had the hosts 5-0 up at the break.

The first highlight of the day from a Clapton perspective came on 52 minutes. Polly Adams faced an FCUM penalty.

Smith, on a hattrick went straight down the middle. Adams, having already made a string of saves to keep the score down dived to her left. But the Clapton keeper displayed lightning reactions to flick a trailing toe and send the ball over the crossbar.

But relentless United kept on coming. Sub Kate O’Gara scored from a header and Bethany Hayes from a cross shot. In the closing minutes Hartley completed her hattrick and Jordon Bailey rounded off the rout with the hosts’ ninth.

The Tons had two breakaway chances for a consolation late on, with tireless striker Link having a shot smothered by the keeper, and new signing Marta Casanovas firing wide.

Scoreline aside, there were plenty of positives to take. The Tons stuck to their tasks against a team three levels higher and pushed United hard. And all the goals came from the sheer quality of the opposition.

The team still have a month to prepare for their league campaign as coach Claudio Gomes looks to put together a promotion charge.

Next up, the men’s teams contested what was for both the final friendly of pre-season.

FCUM fielded half a full-strength side, with the other half on the bench. CCFC meanwhile brought two complete sides, and player-manager Geoff Ocran gave them all the experience the lush Broadhurst Park pitch and surroundings.

In the first half, the Tons absorbed a lot of pressure. A mixture of United wastefulness and Jack Francis brilliance kept them in touch.

The hosts took the lead on 17 minutes when captain Michael Potts curled in from the edge of the box.

Cue a landslide? Not quite. Clapton equalised on 28 minutes. Arthur Wright led a rapid breakaway into the opposition box. He dummied to shoot, sending a desperate defender sliding past, then picked his spot in the corner.

The ref blew for half-time, with the visiting fans still in a state of disbelief and delirium. 2-1. Stop the count.

The hosts had plenty more quality to bring off the bench to salvage the result. One of those subs, Regan Linney drew the tie level. Potts slid him through one on one with Francis, and the United man slotted away.

Ocran gradually gave more player of his 11 subs a run-out, including Dan Anfossy taking over between the sticks, and both goalscorers givin way, the Tons continued to frustrate the home attack.

It wasn’t until the 72nd minute that the Red Rebels finally edged back into the lead. Linney finished off a long, slaloming run that could have been accompanied by the Ski Sunday theme tune.

The late flurry of goals reflected FCUM’s overall quality, but was hard on a hard-working Clapton side who had kept it competitive for so long.