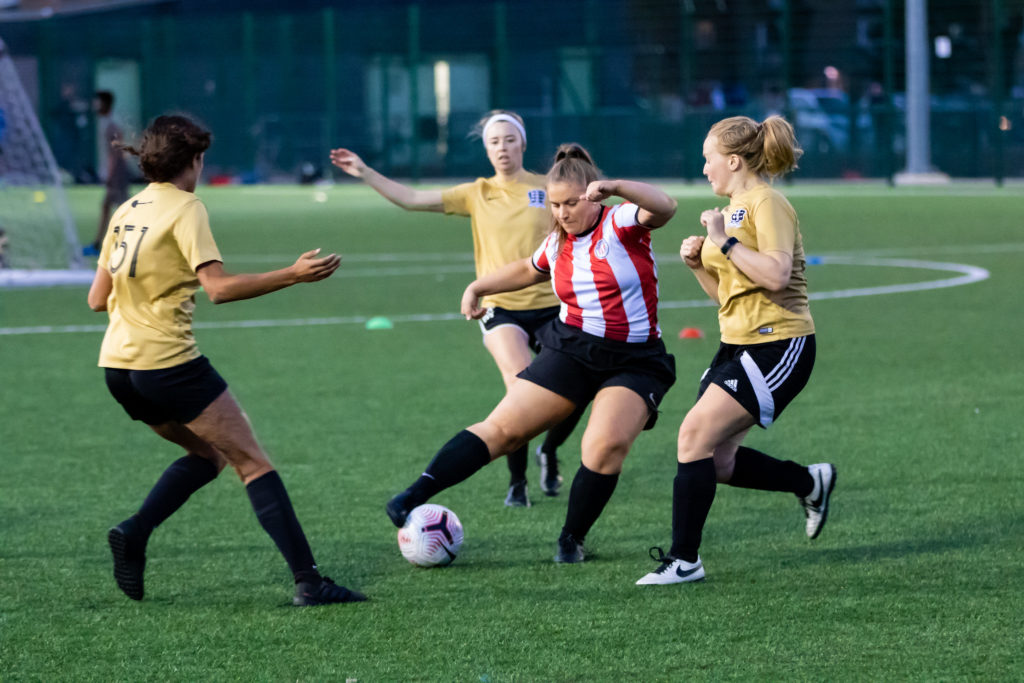 Clapton players arrived in party mood ready to celebrate winning the Super5 – Flexi-League, already secured with last week’s victory over rivals Islington Reds. Four points clear at the top of the table with only the last game against Goal Diggers FC to play, Clapton CFC were champions whatever the result this evening.

The Tons were made to work hard for the draw against a very well organised and motivated GDFC team, led from the back by their goalkeeper who made many crucial saves and who vocally directed defence and attack.

CCFC could not be accused of complacency, they ran and passed as has become their standard pattern of play. Shots rained in upon the GDFC goal, passes back to Chelsie Sparks in goal were not negative since this was the springboard for further attacks either through quick incisive distribution or Chelsie’s direct shots on goal.

Allana also contributed shots on target from range, and Sinead linking up with Annabel and Lucy in attack provided more offensive threat.

However, it was GoalDiggers who broke through just before half-time with a low shot that evaded the Tons defence.

Emboldened by their lead and taking advantage of space left open by Clapton’s search for the equaliser, GoalDiggers pressed home attacks which were heroically defended. Whilst Tons’ luck held out at the back  it refused to smile upon the attack which was thwarted by a tenacious Goaldiggers defence.

Finally the equaliser came from Sinead whose run and shot into the corner was unstoppable, breaking the net in the process. The final whistle was greeted by despair from some of The Tons for whom only a win is good enough. Goaldiggers FC must have felt that they had done enough to secure victory over the League champions but this Clapton team was not going to let anything spoil their night of celebration.

Shahid Malji, better known to us as Shazz, has organised and run the League with a great deal of hard work and organisation and he needs to be congratulated on the effective Covid-19 Regime that has protected players and allowed them to continue to play and enjoy their football.

Shazz presented medals to the players and coaches before handing over the impressive Flexi-League trophy to the Champions Clapton CFC.