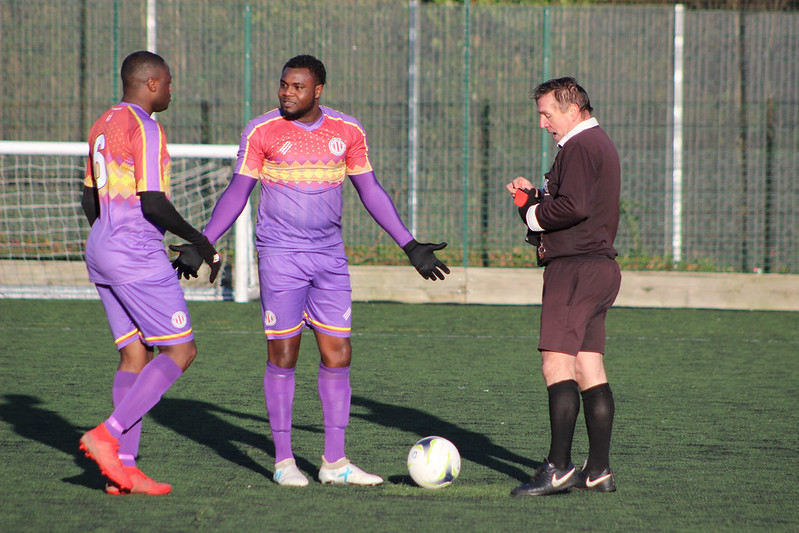 What a ridiculous game of football.

There was every kind of weather, from glorious sunshine to near-horizontal hail. And between all the arguing with the referee there was even a little bit of football, as a brace of own goals helped Clapton to a 3-1 win over Yeading Town.

The artificial pitch at Brunel University Sports Park wasn’t even 4G. It was barely 3G. 2.5G at best.

Match officials banished the 50-odd away and handful of home supporters to outside the cage.

But the visitors struggled to build many decent attacks in the first half. Yeading are a solid, physical side. You could see why many of the top teams in the division, such as Brentham and Samurai, have failed to take full points here.

On 25 minutes, some poor defending gave Yeading a chance right in front of goal. However Jack Francis made a stunning one handed save to push over.

A rainbow made a brief appearance, just before the home side bungled an attempt to clear a corner.

The ball came in from the right and was nodded into the corner by defender Ben Clargo. 1-0 Tons.

But Yeading came straight back into it. They shot from outside the box. The ball hit Geoff Ocran’s hands, which were above his head. Spot kick.

Francis guessed the right way, but Clargo perfectly-placed it in the top corner, his second great finish of the game.

Then the ref gave Stu Purcell a yellow card for a frank and honest exchange of opinions. At least it wasn’t a red this time. Heading in the right direction (unlike Clargo).

Before the break, Clapton managed to go back in front.

Again a corner came into a penalty box melee. It bounced off a few people into the net. A striker at heart, Eliot Crosbie put his hand in the air, but again the last touch had been from the luckless Clargo.

That completed a very odd first half hattrick. Three goals scored by the same Yeading player, yet Clapton somehow in the lead at half time.

In the second half, the real chaos started.

First, Crosbie managed to get himself sin binned for a frank and honest exchange of opinions with the referee. Ten minutes to cool down and think about what he had done.

The depleted Clapton continued to attack and won a penalty, which Stanley stepped up to take.

There followed a lengthy discussion involving the ref, his assistants, the Yeading keeper and three Clapton players about exactly where on the spot the ball should be placed. This resulted in Stanley being sent to join Crosbie in the sin bin.

Eventually, Lewis Owiredu stepped up to take the kick. He curled it in just off centre to give the Tons a two goal cushion.

Clapton now down to nine men, but playing some decent football.

The funny thing is, play was again stopped for various arguments with the referee involving players from both sides. Meanwhile the sin bin clock ticked down. Crosbie and Stanley ended up only missing a few minutes of action.

But Crosbie would be taking a seat again shortly…

Into the last ten minutes, Adejokun burst into the box and was fouled. No penalty. Another Yeading hack. Still no penalty. The referee clearly didn’t want to go through the rigmarole of trying to identify where the spot was again.

Mere moments later, an indignant Crosbie went in for a 50-50, got his timing wrong and got his marching orders. Straight red.

But as before, Clapton looked comfortable playing with less players. They even had the better chances.

It was hard to tell how many players were on the pitch for either team at any given point.

A quick headcount of home players revealed them to only have ten in the latter stages. The ref must have sent somebody else to the bin in one of the numerous slanging matches.

Adding to the surreal spectacle, Ocran subbed keeper Dan Anfossy on as a striker for a few minutes then subbed him back off again. The keeper needed his fourth appearance to be eligible for next weekend’s cup semi clash with Samurai.

At the end, the Tons team (and Clargo) took the adulation of the visiting support. The Yeading defender joins Sant Miquel’s Miky Sanchez in scoring an own goal for us and winning over the fans by being able to have a laugh about it.

Clapton continue their push to go up to a level where ground grading means we cannot play in a 3G cage with no shelter for spectators.

If nothing else, do it for the cold fans lads!

It would have been rude to include Ben Clargo. Jack Francis’ first half save was the one real bit of excellence in a game dominated by other nonsense.