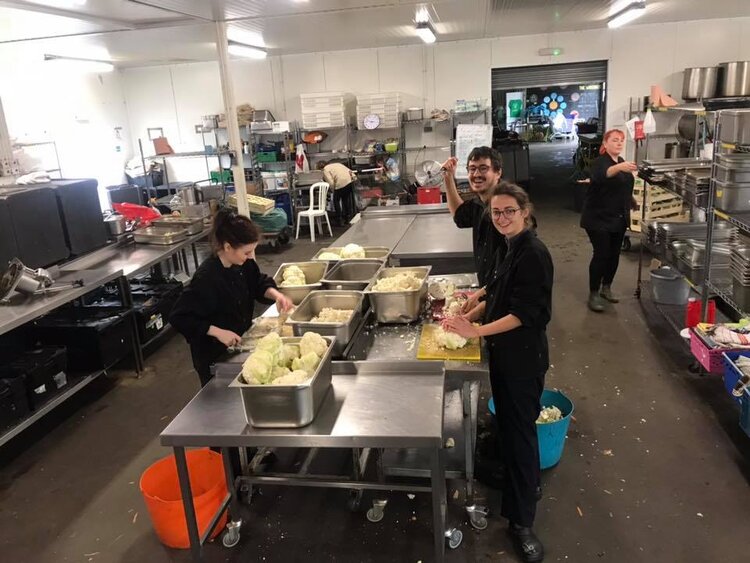 Clapton CFC midfielder Esther Routledge reports from her visit to volunteer, meet, and dance with the refugees of northern France at Christmas…

If there is one thing I can say (or write) about Calais, it’s you should go.

Honestly, it’s really easy. All you need to do is turn up and help.

There are several organisations supporting displaced people in northern France – all of which are entirely run by volunteers, both long and short term.

On the 1st of December 2015,  The Refugee Community Kitchen was set up, its aim to provide hot meals to the refugees in northern France every day, without judgement.

The Refugee Community Kitchen have served food everyday since.

Something that couldn’t be achieved without the hundreds of volunteers – even those that turn up for the day keep the cogs in motion.

These charities stand against the French police as well as the UK and French government. It’s so far beyond a hostile environment – they actively make life in Calais as difficult as possible.

I’m not going to lie; the purgatory of Calais and Dunkirk is incredibly depressing. Hundreds of people, including unaccompanied children sleeping rough in the bitter cold and rain.

It’s the futility of it all. The work is hard, but nothing changes. It’s a day-to-day cycle of survival. The definition of hand to mouth.

However, volunteering there is genuinely fun. You basically spend the day chopping vegetables or wood, meeting cool people and having great conversation.

In a way, being in Calais is reminiscent of Clapton CFC. It’s a group of individuals, successfully running an organisation in a different way. In a way society says doesn’t work. Yet, they are doing it with a lot of singing and dancing in the process.

This Christmas, my sister and I were lucky enough to personally go distribute the food in Dunkirk. It has a predominantly Kurdish community and they have to be the friendliest people I’ve ever met.

When you’re pulling up the sheer number of people there hits you like a ton of bricks. Hundreds and hundreds of incredibly talented people just looking for an opportunity to have a life somewhere.

We served them food, ate dinner alongside them, had some great conversations and then ended up teaching the dance moves to Africa to try and keep warm.

It’s the language skills that shocks me the most, so many of the people there can speak so many languages. In a points-based system, these people are on 500x the points of anyone I know

As I said, if there is one thing I could say about Calais, it’s you should go. It’s a place that’s hard to put into words: it’s beautiful skies among a backdrop of barbed wire, it’s all the hope and no hope at all.

If you want to go or ask more questions, please feel free to ask me: estherroutlege1@gmail.com