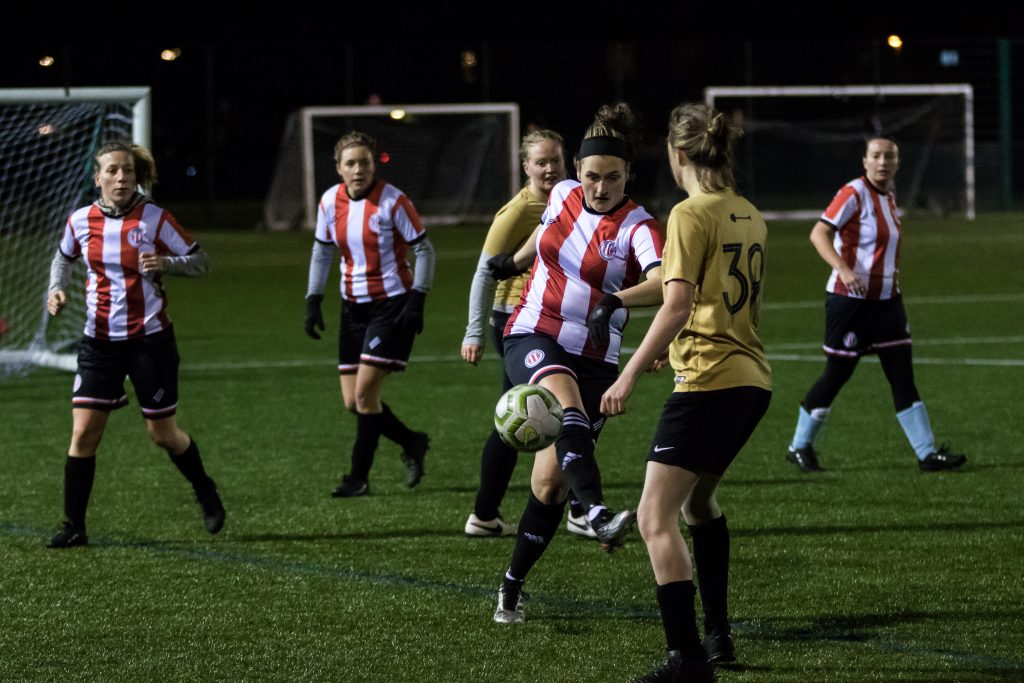 Clapton CFC 5s have now played all of their opponents in Super5League Flexi division and remain unbeaten with Islington Reds the only team to take a point from the Tons.

Our friends at Goal Diggers FC were the last remaining rival to face up to the Famous 5s.

Stung by the stolen points from last week’s game, the Red and Whites showed they had learnt the lessons and began this tie with concentration and resolve.

The passing and running were back as before but this time chances were being taken.

Rhianne Wright was running at the GDFC defence with Chelsie Sparks cutting in from the left and Gabriella Monasso pushing through on the right wing.

Supported with runs into space from Jess Loughnan and Maylea the chances started to flow.

Rhianne put the tons one up after a solo run and shot that last week might have hit the post but this time hit the net.

Soon afterwards the passing game resulted in the second goal when Gabriella and Rhianne’s quick one-twos found Rhianne in front of goal with only the keeper to beat – 2-0.

Chelsie remained as determined as last week but this time there were bullets and fending off challenges from Goal Diggers her shot beat the keeper to put the Tons into a commanding three-nil lead.

To complete the perfect half Rhianne once again cutting in and shooting claimed her hat-trick to give CCFC a half-time 4-0 advantage.

Lucy Rankin came on for the second half but found a resolve in the GDFC back-line difficult to defy. Pushed back onto the defence Tons soaked up the pressure and any chances on target were confidently gathered by Annabel Staff in goal.

Further chances came the Tons’ way after a series of corners, Rhianne hit the post/crossbar and Lucy was denied by brave goalkeeping when put through one-on-one with the Diggers’ custodian.

Although chances were created at both ends the defences were on top in the second half and the final whistle confirmed the 4-0 victory for the Tons.