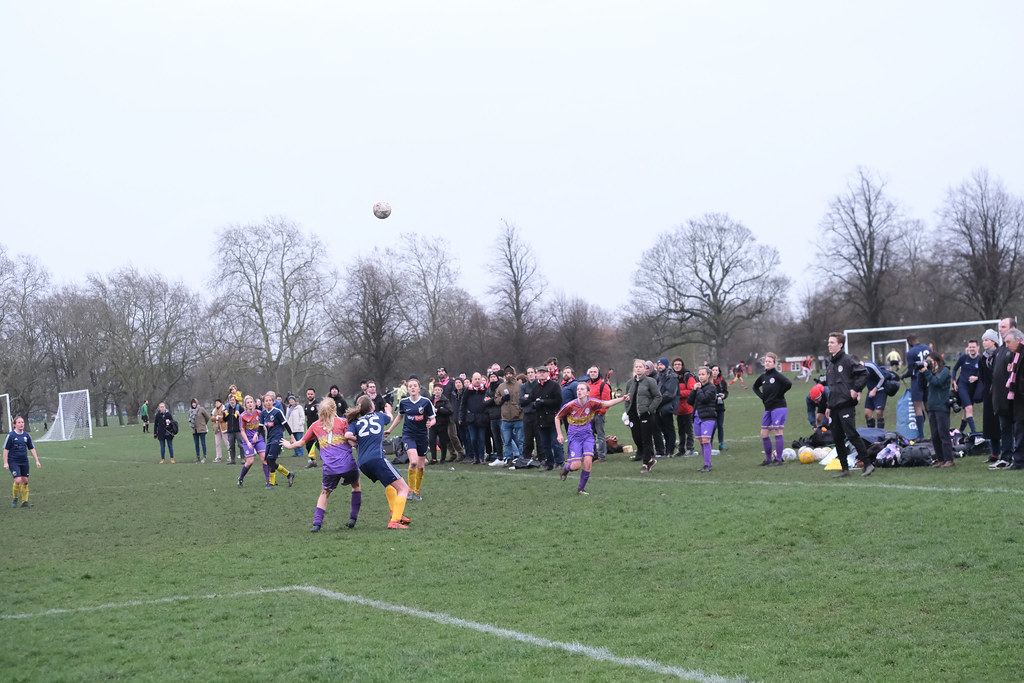 The Tons ventured back to deepest South West London to take on Clapham United WFC in the John Greenacre Memorial Trophy.

With Clapham sitting a whole league above Clapton, it was due to be a tough match, but after last week’s impressive second half against Islington Borough there was a sense of belief within the team, and the travelling Tons fans.

The windswept Tundra of Clapham Common played a foreboding host to this mighty battle of the Claps. The skies were vast, grey and threatening a downpour, and the pitch was very, very wet.

Once again, the CCFC women’s team found themselves wading through mud and standing water, and where once there was a centre spot for kick off, there now appeared to be a small boating lake.

Clapham started brightly and threatened the Tons goal with two free kicks on the edge of the box and a corner within the first fifteen minutes, but Ferreira was looking strong in goal and kept her composure to keep the score level.

Clapham continued to attack, and on 16 minutes a perfectly placed through ball was picked up by Clapham’s number 14 and shot past Ferreira, 1-0.

The next ten minutes saw both teams chasing after the ball, pinging awkwardly off the potholed pitch and getting carried sideways by gusts of wind.

The Clapton corner taken by Ciara Monahan on 23 minutes should have given us a deserved equaliser had it not been for a determined punch from the Clapham keeper that diverted the ball off the bar.

Moments later, a cross-shot by Emily Link came close too, but the score remained at 1-0.

With less than ten minutes to go of the first half, Emily Link hit a beautiful sliding shot on target but Clapham’s keeper once again kept it out.

Link wasn’t done there though, and a minute later she almost squeezed in a goal from a very tight angle which was tipped over the bar.

The Tons were really battling now and showing they were here to win.

Monahan had another fizzing corner kick almost fly into the net, while at the other end of the pitch, Lucy Rolington was having absolutely none of it when Clapham’s forward entered the box and she slide tackled like a perfectly timed juggernaut to deny Clapham another shot on goal.

A brilliant one-handed save by Ferreira just before halftime denied Clapham a two goal lead.

Couldn’t kick off again from exactly on the centre spot pic.twitter.com/stSm1cDNXv

Link was showing great determination in the second half to find an equaliser and almost levelled with a lovely half volley early on.

Play was back and forth, with Ferreira producing some stunning saves to keep Clapham at bay, and Monahan showing brilliance with an audacious sombrero to keep possession in midfield. A sombrero! The cheek of it…

Clapton were looking the more likely to score and were denied a penalty when Link was flattened in the box, much to the vociferous dismay of the travelling fans.

Clapton were having the lion’s share of possession, but it was Clapham who went closest to scoring next with the ball firing off the bar.

The Tons had Ferreira to thank for keeping the score at 1-0 deep into the second half as she produced some more outstanding saves from a wave of Clapham shots, her work rate evident from the quagmire she was now wearing as a kit.

Into the last 15 minutes and it was a total Tonslaught as Clapton kept pushing forward time and time again.

It looked like we would find the equaliser when Link tore up what remained of the grass on the left wing and fired a scorching shot just wide – the determination was palpable.

So close! Verity Phillips nearly equalises in the last minute after another great team move pic.twitter.com/HvStpUq83d

With one minute to go Verity Phillips almost finished a fantastic team move to go level, but the Clapham keeper denied her and with that the final whistle was blown. There was to be no cupset this time.

Clapton were by no means outplayed and put up an immense fight against a team who on paper should have had no troubles blowing the Tons away.

The second half saw Clapton up the ante and they deserved more from this match, it felt unfair to be heading back to East London defeated, particularly with such a brilliant team performance.

This Sunday sees CCFC travel south again to take on old foes Dulwich Hamlet Reserves, and if this performance is anything to go by then we should be looking at a closely fought match where the Tons may just get revenge for last month’s home defeat.

A quick message from Emily Link and Susana Ferreira.