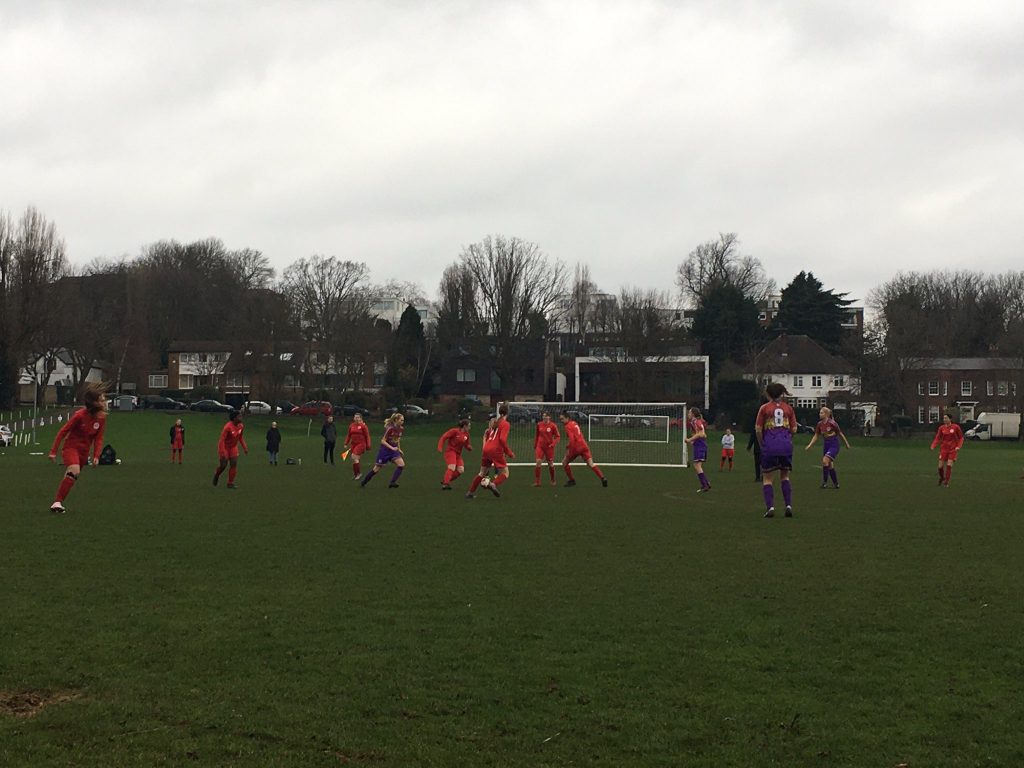 Mud. It’s become synonymous with the Tons of late. Here we were, away in the depths of North London, in a field.  A field with lots of mud. We love mud don’t we?

It was time to take on Islington Borough, who we last met in a seven-goal belter back in November 2019.  That was also a match marked by a lot of mud.

Within minutes of kick off, the game was gone. Not the match itself, the game.

Here was the first of two successive foul throws by Islington Borough, one even came complete with a…yelp?

Then Clapton got into the mix with their own foul throw. Then Islington had another one.

You hate to see it.

Borough started brightly, unlike the afternoon itself, and piled on the pressure forcing Tons keeper Susana Ferreira into two fine saves in the first 20 minutes.

Borough were lively, precise and in control of the match with the Tons very much on the backfoot.

Then, as if it wasn’t hard enough to see so many foul throws, Borough were awarded an outrageous penalty after their shot hit a hand and it was deemed handball by the ref.

You hate to see that too.

The 66 sodden Tons supporters in attendance at St Aloysius Playing Fields got behind the team and were in fine voice, attempting to lift spirits after the poor decision, but less than ten minutes later Borough had scored another, 2-0.

The penalty wasn’t to be the only poor, perplexing and downright preposterous decision of the afternoon though, as just before half-time Borough were awarded a frankly nonsense free kick which resulted in their 3rd goal.

They were playing well of course, and it’s fair to say the Tons were playing less than at their best, despite Emily Link making some great runs forward, things needed to change after half-time.

The weather was becoming more oppressive by the minute, the rain had set in and dark clouds loomed over this opulent no-mans land between Crouch End and Highgate.

Things were looking grim, but Clapton had transmogrified over half time and came out looking the more likely team to score from the off.

The 30 minutes that followed were much, much better with the Tons stringing together some lovely passes, defending with heart and pinning Borough back.

There were some more foul throws, more yelps, some interesting refereeing decisions and a lot of singing in the rain.

It was a corner, 15 minutes from time, that resulted in Clapton’s first goal of the match.

Fox in the box, Naomi Scriven, headed the ball into the Borough net and suddenly it was game on!

Clapton kept up the pressure with Verity Phillips and Lucy Rolington having a great second half, the team played with more focus and energy and within just two minutes of her first, Scriven almost had her second goal from a cross. Borough were rocking.

The Tons had the bit between their teeth. With less than ten minutes to go, Scriven burst forward with a run so searing it dried the pitch under her feet, and smashed home a thundering goal.

Clapton pushed for a third goal despite Borough’s best efforts to put the game to bed, and it looked like we would score again, but time, tide, and referees wanting to go home wait for no one and the full time whistle was blown before Scriven could get her hat-trick.

It was a soggy, frustrating afternoon in the end – the Tons shaky first half and Borough’s incisiveness proving too much of an obstacle to overcome, but the much improved team in the second half was great to see and should prove encouraging going into next weekend’s clash against Clapham United WFC.

Naomi Scriven gets the nod for her goals, but Verity Phillips ran her close.