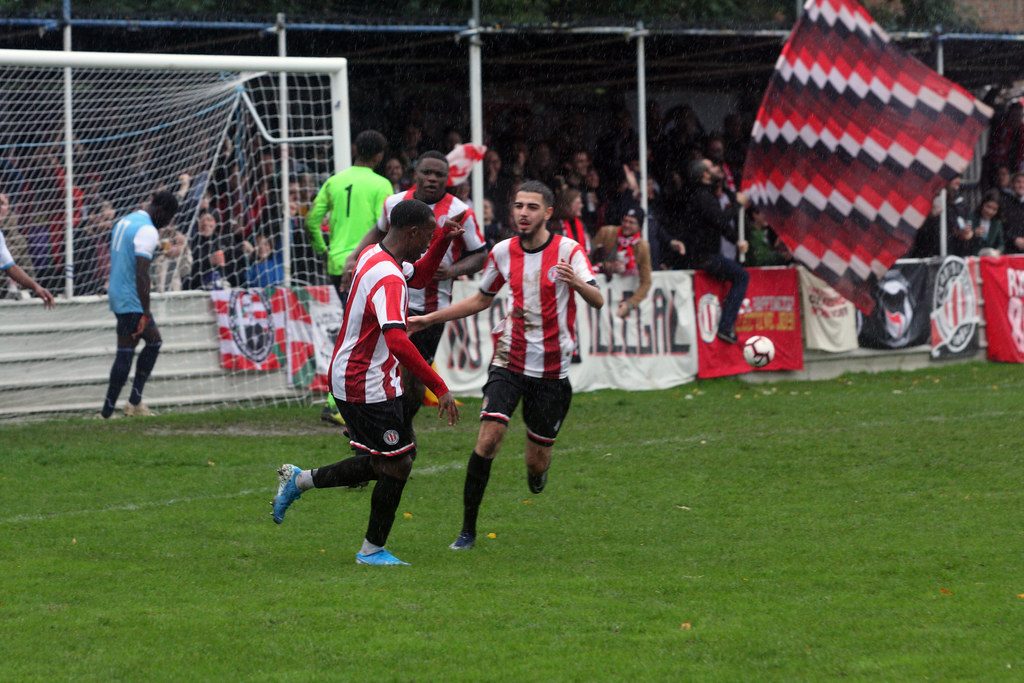 The men’s team made light work of CB Hounslow United’s second string on Saturday, with a little kept in reserve.

There were seven changes from last week’s cup win over Runwell (which will now need to be replayed).

There was an early chance for Paul Oshin, who took it round keeper Jaden Alie. But the Hounslow man just manage to get a fingertip on it to deny a certain goal.

Then Prince Kwakye dragged a shot past the post.

There were heavy ‘we’re gonna score in a minute’ vibes.

Next up, Lewis Owiredu raced through on the left and shot at the far corner. Again the Alie fingertips saved the visitors, flicking it onto the post and behind for a corner.

Bilal Hussain tried to slip in rather than whip in the set piece. Midfielder Julian Austin, making his home debut, peeled off and stabbed towards the near post. Alie fingertips. Post. Again.

Finally the deadlock was broken. It was another Owiredu foray from the left. He went round the goalie, held fire, then took it round a last ditch defender to stroke in.

Then a Yfeko freekick from the edge of the box glanced off the wall and past the helpless keeper for two.

A good advantage to take in at the break, but it could have been a few more.

Kwakye put the tie beyond doubt at the start of the second half with a glorious curling shot into the top corner from outside the box.

After that though, the Dragons had a great chance.

A nice reverse pass put their number 10 (name illegible on official team sheet) in on goal. But Francis raced on to it to block.

From the next attack the Clapton goalie had to desperately scoop off the line. Hounslow players were raging that the assistant referee adjudged that it hadn’t gone in. Especially number 10.

On 72 minutes a long distance strike from sub Bruno Pereira hit the post. Fellow sub Bogdan Panescu laid the rebound off to Liam Smyth, absolutely steaming in, to fire in Clapton’s fourth.

The Tons creep up to 12th in the league. With a bit of form and games in hand, they’ll be looking to reel in some of the teams above them.

We caught up with some of the players and assistant manager Stu Purcell to discuss the victory.

A goal was a nice way to cap a commanding performance from left back Liam Smyth.