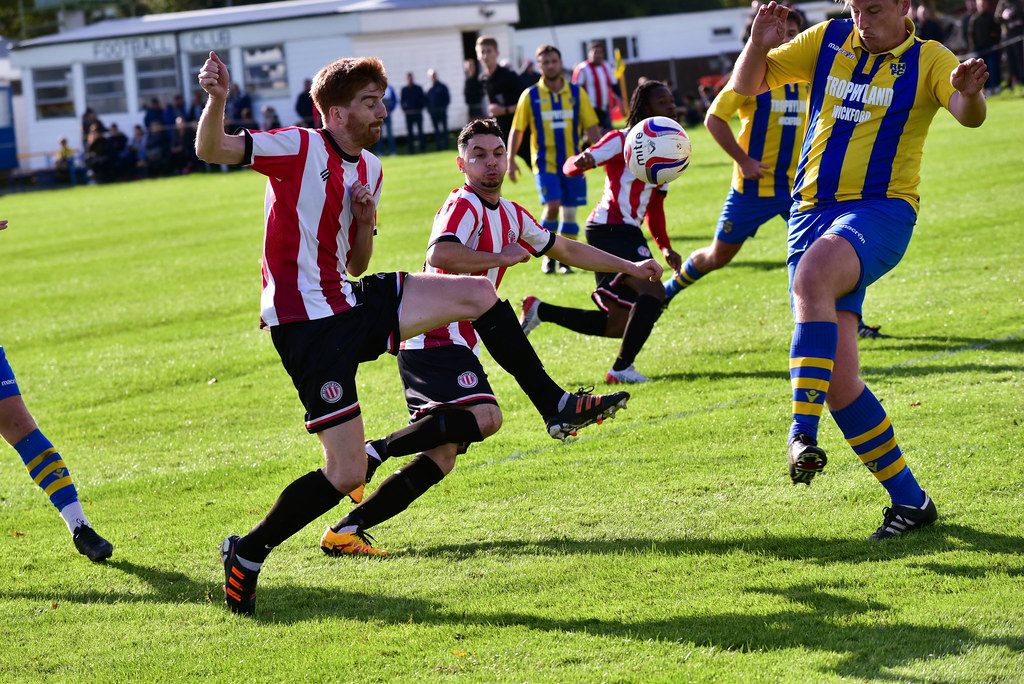 On Saturday the men’s team ventured out to rural Essex to take on Runwell Sports in the second round of the BBC Essex Premier Cup.

On a simple, roped off field overlooked by a medieval church on a hill and a sky of fluffy clouds, Clapton progressed with a more-comfortable-than-it-sounds 2-1 win.

Just to get it straight out of the way: the home team’s running was average at best.

Clapton kicked off with Yacine Rabia – playing his last game before relocating to the Middle East – at centre back. Having finally obtained international clearance, Julian Austin made his debut in centre mid. Ashley Headley, star of the pre-season game against Roter Stern Leipzig, became the third keeper to play competitively this season.

The hosts, in their stereotypically Essexian shitty yellow kits, struggled to deal with Clapton’s opening onslaught. Lots of big hacks and shirt pulls gave Clapton’s left back Justin Cummins plenty of chances to whip into the box. And there were some exceptional deliveries.

On nine minutes, a Cummins special made it all the way through to Rabia, who couldn’t angle it back towards the goal.

Strangely it was the less-well hit balls that caused Runwell the most problems. Low cross after low cross caused chaos in the home box. Tons players had a lot of fruitless swipes.

From one corner Runwell couldn’t clear, the ball fell to Dean Bouho. He drove it towards the goal. Right in front of the goalkeeper, Josh Adejokun did a fancy flick to take it in. Dean wheeled away in celebration, but Josh’s touch was more than just a deflection.

On 25, more commotion in the Runwell box. Another Cummins corner ping-ponged, then dropped to Fama Sangare, who slotted into the corner for 2-0.

But that lead did not reflect the extent of Clapton’s dominance. And towards the end of the half, the home side threatened.

Their most dangerous moment came when one throughball bobbled, sitting it up nicely for attacker Aaron Rix. He shot at the bottom corner, but Headley managed to get a strong hand to it. From the next Runwell attack, the Clapton keeper spilled a cross. Bouho was there to hook off the line.

With the two goal cushion, the Tons seemed to relax in the second half. A little too much.

Early on their number 6 Clarke put it into the side netting from a tight angle.

On 72 minutes, a corner Runwell failed to get off the ground still managed to cause chaos – a theme for both sides. This one whistled straight across the goal line and out the other side.

Bouho was next to threaten from a corner up the other end. He bustled through the crowd and blasted straight at the keeper. He had a second stab at the rebound but shot into the side netting.

Putting on a show for his Tons farewell, Rabia showed some nice skill to take it round two Runwell attackers, effectively retiring them from football. They will need to find another sport to play now.

Sub Bilal Hussain then led a counter attack, playing through Adejokun. A Runwell defender tripped himself and fell over a good 10 yards from the action. Adejokun went for the nutmeg, but the keeper thigh-trapped it. It’s childish, but the guy falling on his face was really funny.

Then, suddenly, Runwell got one back. Joe Olley jogged into the Clapton box, evading some not-too-convincing challenges. He then slid home off the base off the post.

With the Essex Olympian League Division One side pushing for a late equaliser, gaps appeared at the other end. On the counter, Bogdan Panescu took the ball inside rather than to the corner. Geoff Ocran flicked it on to Hussain, all alone on the right. The attacker tried a first time shot, but a bobble meant he lifted it over the bar.

There was late concern for Josh Adejokun, who limped off after a collision with the keeper, but Clapton held on to go through to the next round.

The Tons have been drawn at home to Leigh Town, with the tie provisionally scheduled for November 23rd.

We spoke to new signing Julian Austin, Geoff Ocran and the departing Yacine Rabia on the cup win.

New boy Julian Austin showed something Clapton have lacked at times this season: creativity and drive from midfield.

The fans will be keen to see if he will go on to become a first choice in the centre of the park.