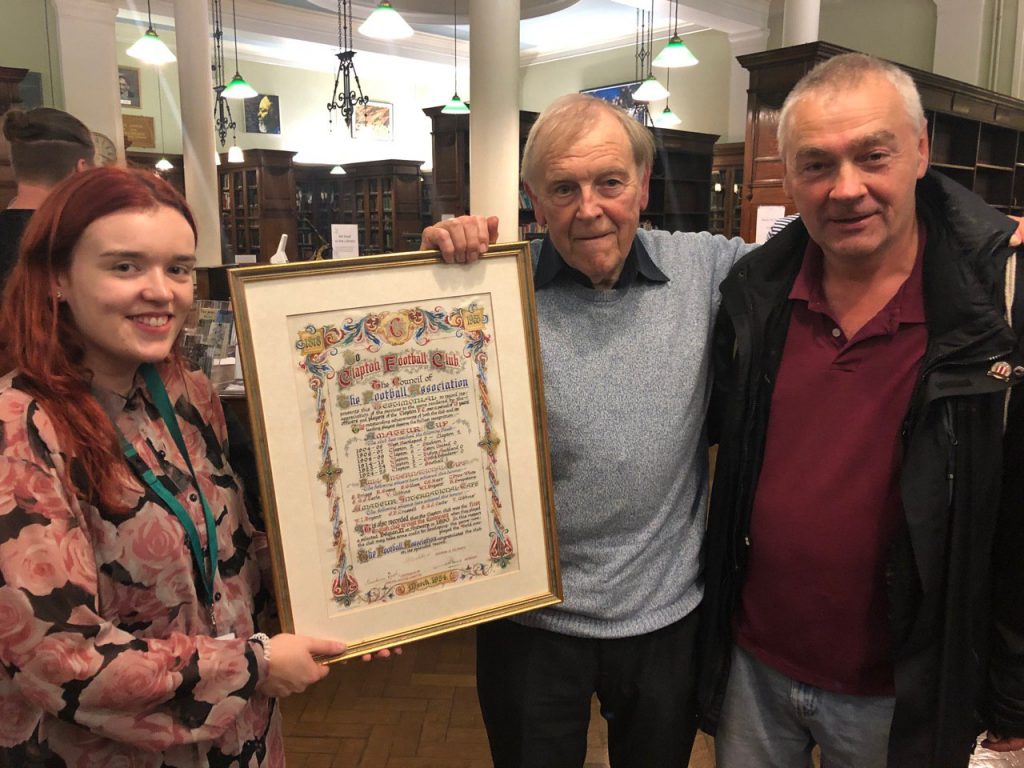 Staff at the Bishopsgate Institute opened up the Clapton Football Archive – set up by CCFC members – for dozens of visitors on Friday night.

The event was held in the Special Collections Library at the Institute’s lovely old building near Liverpool Street station.

Masses of Tons history was on display, including minute books dating from as early as 1901, and home and away programmes throughout the years.

The famous 1954 Illuminated Scroll, presented by the FA on the club’s 75th anniversary, was also there.

It was once rescued from a fire that destroyed the clubhouse at the Old Spotted Dog, and still bears one tiny scorch mark.

A range of up-to-date items include colourful stickers, scarves and a glass plaque given to us by our friends from UE Sant Miquel, Catalonia who visited the Stray Dog last season.

Since one aim of the Clapton Football Archive is to keep it up to date, new items are constantly finding their way to Bishopsgate from recent matches and events.

Another object is to build on what we already have from the past. We were honoured in this respect with the appearance of Life Member Mike Fogg and his wife Jayne, who had come from Buckinghamshire to be with us.

Mike had presented the core of the collection, the old minute books, back in September 2016, which he had guarded carefully through the early 21st century.

Mike brought with him some more classic Tons memorabilia, including a programme from the last weeks of the Second World War for a Clapton home match against Walthamstow Avenue.

The Institute’s Principal Archivist, Stef, was also present to answer members’ questions and point out further research that can be done using their vast collection of London related matter.

This includes historic books and documents from trade unions, residents’ campaigns, Suffragettes and, more recently, the Stonewall Archive from the long-running Section 28 campaign, along with a vast general collection of LGBTQ material.

Another Life Member, John Sharpley, was also present, having come all the way from Oxford.

John, whose father played for Clapton way back around the time of the First World War, still makes it to Clapton CFC matches when he can and follows keenly the club’s current activities.

John was pleased to find his father’s name mentioned in one of the early minute books, written in ink the old-fashioned way.

Anyone interested in checking out the Clapton FC Archive, or with items to loan or donate, should contact: