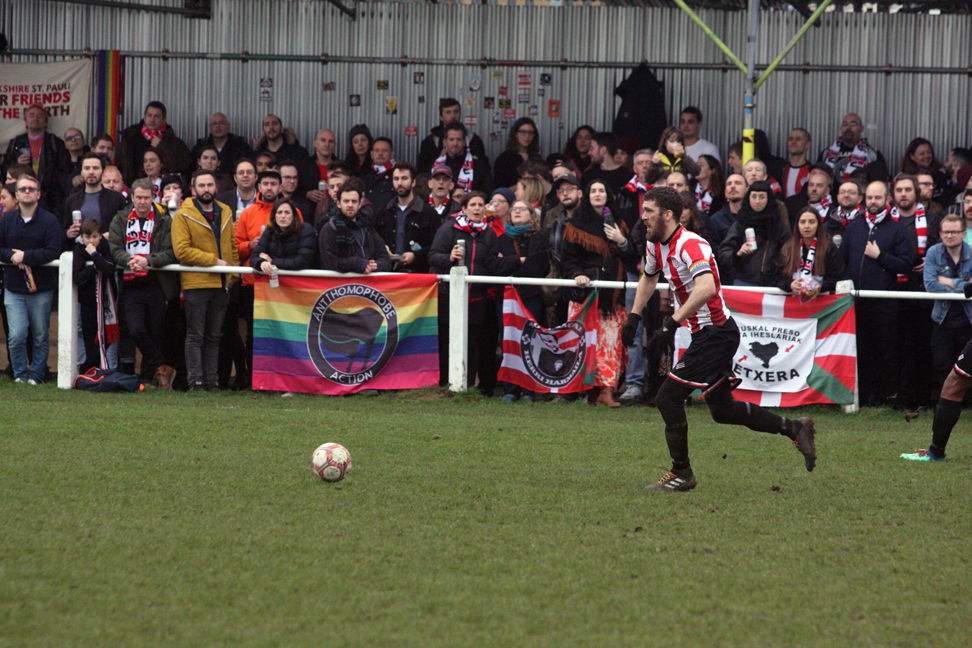 Non-League Day is the annual celebration of grassroots football, taking place during the autumn international break when there are no top-flight games.

We’re thrilled that for the first time, Clapton CFC have a home game on Non-League Day.

We are making a day of it. The game has been selected as one of five games promoted by Kick It Out across the country and we’re delighted to support the anti-discrimination campaign.

Our friends from Hackney-based migrants group Akwaaba will also be joining us and teaming up with our own Young Tons to design and stencil their own shirts.

We’ll also be collecting items for our charity partners at the Magpie Project.

More on all that below, but first the football. The two sides have a bit of history, having met twice in the MCFL Division One (East and Central) last season.

Away in Barnes, the Tons went down to a 4-0 defeat, although the scoreline didn’t do justice to a spirited performance.

Back at the Stray Dog, the men in red and white ran out comprehensive 5-1 winners in our Football vs Homophobia game, in front of a then record of 618.

Stonewall eventually finished as runners up, just a point behind Clapton, and both clubs earned promotion.

Our visitors also played Wilberforce Wanderers at Wembley Stadium as part of the Rainbow Laces campaign, coming away with a 3-1 victory.

Both sides have had a tricky start to life in the higher division, but it’s early days and a wide-open division so it’s still all to play for.

It seems like so much has happened since our last home game in the league but it’s finally great to be back at Wadham Lodge after nearly two months.

It seems our season is still waiting to really kick into gear and we are yet to name unchanged teams/squads consecutively.

Highlight of the season so far would be the Hillingdon game, where we won away 3-0, but we haven’t been able to build on that so we need to gather some momentum and climb the table.

Stonewall FC have experienced a mixed start to the season, particularly affected by the injury of some key players across the team.

The arrival of some fresh faces to the club this season is clearly having a positive impact, with the team improving week on week and a dynamic and exciting new playing style emerging.

The game with Clapton CFC is fast becoming a special occasion for SFC, given our apparent shared vision on what modern day football should entail.

To play against an ally club that is focused on building a positive community around them and an ethos centred on giving back through work with local organisations like Akwaaba, is a pleasure to see.

Stonewall will be visiting us again on December 7th in the quarter finals of the Alec Smith Premier Division Cup.

Our full-colour matchday programme will be on sale for £2. There’s a different cover artist each time, and this one was designed by women’s team player and artist, Alice May Williams.

Some of our young supporters will be joined by special guests from Akwaaba on Saturday to design some Clapton CFC shirts together.

Akwaaba is a Hackney-based Sunday social centre for migrants committed to actively opposing racism and all other forms of discrimination and oppression.

All young people (and their parents) are invited along to join in. Meet our volunteers at the entrance from 2pm.

Clapton CFC will supply all the materials – T-shirts, stencils, paints and sprays – free of charge.

Our Young Tons will also be leading out both teams on to the pitch before the game.

This is one of only five across the country selected by Kick It Out, and the only game in London.

Clapton CFC in turn want to recognise the contribution of football’s leading equality organisation into making it a better sport for everyone.

Both teams will be wearing special Kick It Out T-shirts. But the campaign is more than just a T-shirt

The discrimination we continue to see at all levels of the game proves the sport needs an organisation like Kick It Out more than ever.