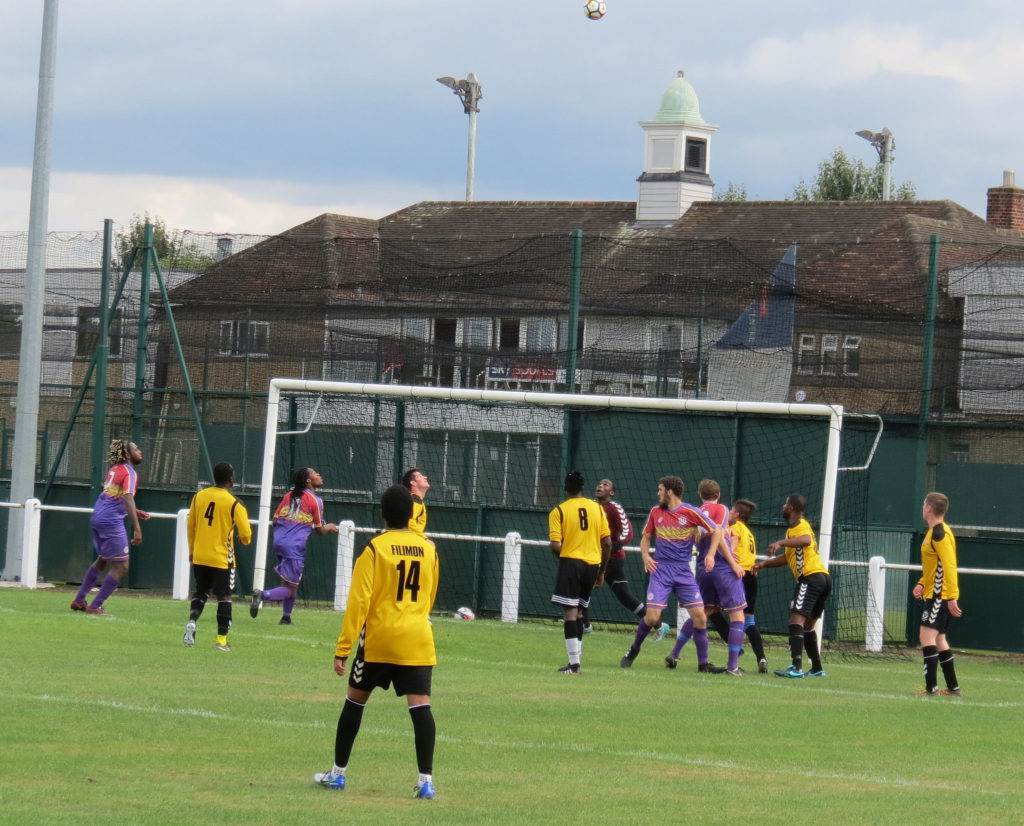 After a well-deserved break, the league and cup-winning Clapton CFC men’s team return this weekend for the first of their series of pre-season games.

We are pleased to welcome Wanderers FC back to Walthamstow after a hard fought friendly last summer – the first time we wore our now famous away shirt.

The club traces its history back to the original Wanderers FC, who won five FA cups in the 19th Century.

Reformed in 2009 to raise money for Unicef and other good causes, the men’s side play in the Surrey South Eastern Combination League.

They are also actively involved in their local community, having recently led a successful crowdfunding campaign to develop a brand new football pitch for Virgo Fidelis Convent Senior School.

The game saw a spirited performance by a Wanderers team despite playing several steps below the Tons.

GOAL Clapton back in front. Lovely strike from @Stefan_Nielsen into the top corner. 2-1. pic.twitter.com/Low0N01Dwa

There was also the small matter of a photo that went around the world, starting a chain of events that resulted in Clapton CFC selling oh so many shirts.

Wanderers have recently revealed their own banging kit for this season. A gold and black design based on a map of Upper Norwood from the club’s 19th Century heyday.

The club are keen to hear from businesses in #WestNorwood, #CrystalPalace, etc, who would like to sponsor our Limited Edition shirt.

Final design TBA but will be worn on the opening match at our new home & sold across the world.

With some funky designs also being released by FC Roast and Woodford Town, 2019/20 is looking to be a vintage year for the shirt collectors.

The friendly is being played on the caged 3G pitch at Matchday Centres, which has been a happy hunting ground for the Tons in previous friendlies.

The game will be used to give runs out to some new faces hoping to stake their claims as future CCFC legends.

Player-manager Geoff Ocran will be the man they need to impress, and he’s looking forward to putting the squad through their paces.

“And…. we are back again. New season, New league, New aims and objectives.

We started pre-season training last week mainly with the trialists and they will make up the majority of the squad for our first friendly vs Wanderers.

We as management feel the squad we put together last season is more than capable of competing at step 7 and our results in Anagram trophy proved that.

However, it’s always good to refresh the squad with some new faces and competition for places can never be a bad thing.

Fitness will improve game by game as we look to get off to a good start in the league, in what we hope will be another record breaking season.”

The game will be very low key. It’s in a 3G cage so there will be none of the usual trappings – no food, or merchandise stall, or food bank collection for instance.

So if you’re bringing first timers along it might be better to wait until the 20th July when we face Sporting Hackney at The Stray Dog.

If you decide to give the game a miss, then the Forest Gate Festival is on the same day and is sure to be a great afternoon.

But if you want to come along, it could be a great opportunity to check out some trialists and pick out your new favourite “before they were famous.”