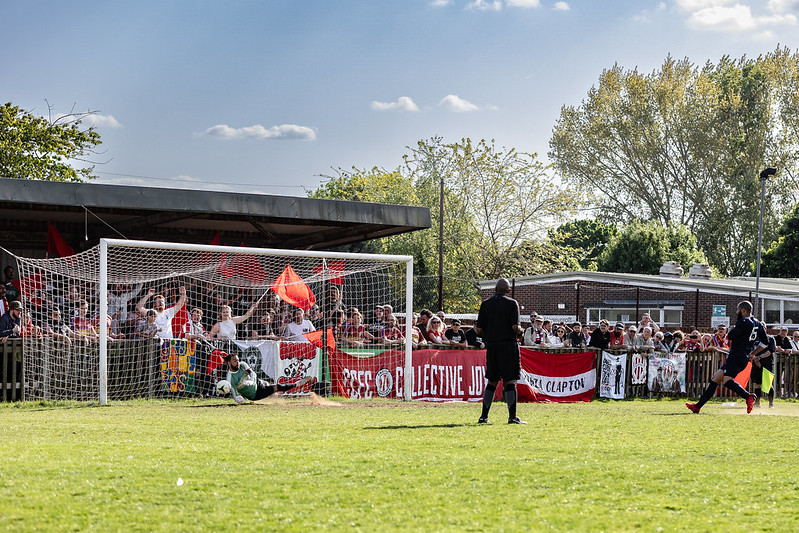 On 13 April 2019, the mens team took on Hilltop at Uxbridge FC in the Jim Rogers President’s Cup final.

After a tense game, in which our opposition could and perhaps should have won in normal time, it finished 2-2 and the Tons did the business from the spot.

And as it was three years ago, so it was on Sunday, against Kensington Dragons in the Alec Smith Premier Division Cup final.

After the, ahem, ‘over-exuberance’ of a celebratory pitch invasion at the end of the Hilltop tie, the fans confined their celebrations to the stands this time.

Reflecting the way this team has evolved over the last couple of seasons, Josh Adejokun and Dean Bouho were the only starting line-up survivors from that day.

Having done the league double over Kensington this season, 1-0 at home and 4-0 away, the Tons came into the tie with confidence. But the Dragons quickly showed themselves to be an improved outfit. In just the second minute they won a penalty, from a Liam Smyth challenge that was right on the edge of the box. Even the slowed down footage doesn’t quite clear up whether or not it was just inside the box. In any case, the Dragons just managed to convert past Jack Francis, who went the right way. Their first ever goal against Clapton, at the third time of asking.

Encouraged, Kensington pressed for more. On 21 minutes, they headed just wide. Then Francis was called upon to make a smart save and stop their right winger from firing in at the near post.

Clapton managed to force a handful of corners but could not make anything of them.

At the end of the half, Josh Adejokun slid through Tons striker Fred Taylor, whose shot was saved. Taylor bundled over their keeper out of sheer frustration, to earn a justified yellow.

The way of the Dragons

Kensington started the second half just as they had the first, with a quickfire goal, this time a close range finish. Many of the Tons fans were still held up at the clubhouse bar and missed it. The East Londoners were now faced with a massive uphill struggle.

The Dragons looked to stifle the game, protecting their healthy lead. And they were doing this well: slowing things down where they could, while still looking to snatch what would have been a knockout third goal on the odd attack.

Then on 62 minutes, the Tons were handed a lifeline. The referee awarded a penalty after a penalty area melee and Julian Austin confidently smashed down the middle.

The Kensington keeper made a spirited effort to prevent Austin from taking the ball back for the quick restart, but again he was eluded!

On 75, the lead was wiped out. Again Austin, this time diving to head in a delicious, curling James Briggs free kick from the left touch line.

Dragons almost had an instant response with a player sent through on goal. But Francis made a superb reaction save.

Kensington had a half chance to snatch it at the death. A forward tried to scissor kick from a tight angle, but sliced past the post. We were heading for penalties!

It is a cliche but it’s true: so much of a penalty shootout is mental.

This one was always going to be a bigger challenge for Kensington. They had to pick themselves up from the disappointment of letting their lead slip away. On top of that, they could win the toss, but that would only give them the choice of which Clapton end to shoot into!

The Tons support amped up the chanting and waved red flags. To that distracting backdrop, the Dragons squeezed their first penalty just past Francis.

Some of the Kensington fans had come round from their spot at the halfway line and were valiantly getting their boos heard over the Clapton din. Austin fired in his second penalty of the day.

Francis saved the next one to give the Tons first blood. Next up was second half sub and set piece master Briggs. In the net. Briggsy shushed the boo boys.

Dragons, then Clapton’s Taylor, then Dragons again converted to take the score to 3-3. When Noah Adejokun buried Clapton’s fourth kick, Kensington had no more room for error.

But their final taker cracked and sent his effort over the bar. The cup was Clapton’s!

You had to feel for the devastated Kensington players, but this was a come-from-behind win that showed the character of Geoff Ocran‘s team.

Captain Jack Francis improvised a novel trophy lifting technique, leading the red and white heroes in a charge towards the delirious fans.