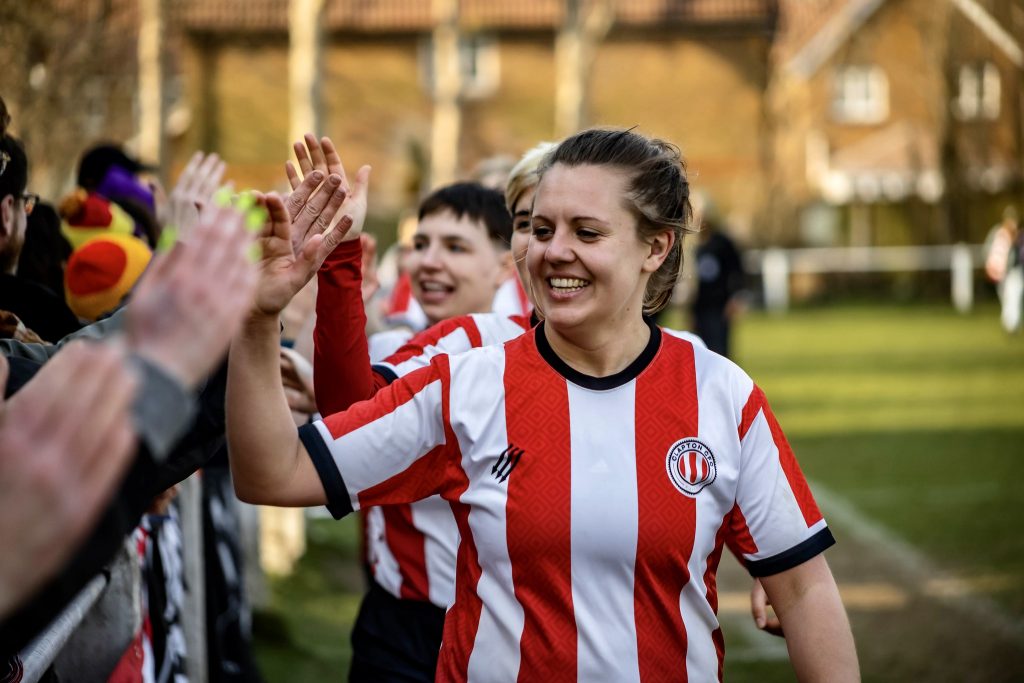 A fifth giant-killing and a fifth penalty shoot-out win of an extraordinary season fired the women’s first team into the Capital Women’s Cup final.

Our opponents were the highest-placed team in the tournament, sat in second place in the division above us but with five games in hand.

With star striker Emily Link still injured, and a recent dip in form culminating in a first league defeat of the season last week, the Tons were very much outsiders.

And the task didn’t get any easier when after a lively end-to-end start, Sutton broke the deadlock on 4 minutes, with a fierce shot taking a deflection and giving Polly Adams no chance.

But just ten minutes in, we were level. Marta Boiro‘s corner was floated towards the back post, where Verity Phillips rose highest to place a firm header past the keeper.

That was it for the first half, though Adams has made three superb saves, and there’s been some crucial clearances. But we’ve had chances on the break too, Maria Mendonca with a great lob just wide.

Marta Casanovas dribbled round the keeper but her shot was cleared off the line by a covering defender.

Then a Boiro corner was bundled towards goal by Mendonca but the ball is well held by the Sutton keeper.

Late on sub Mari Mogstad Eri pulled up injured moments after coming on, meaning we had to see out the game with ten players, although after the game it was discovered roll-on roll-off subs should have been allowed.

And in the dying seconds, Sutton could have nabbed it, but Adams brilliantly kept out a close-range shot with a reflect save then was back on her feet to block the rebound too.

1-1 at full-time, then, and straight to penalties, exactly the same as the previous round against Sutton United U23s.

This time, however, two early missed spot-kicks meant we were clinging on by our fingertips at 3-1.

We needed to score our last two penalties, and for Sutton’s last to be missed. That was obviously very unlikely to happen, but then you can never, ever write off this team.

And so it proved, with Adams making two saves, scoring herself, then Ciara Robinson tucking away the winner for 5-4.

We’ll meet Dorking Wanderers, one division higher and whose chairman is Calum Best, in the final. Be there!