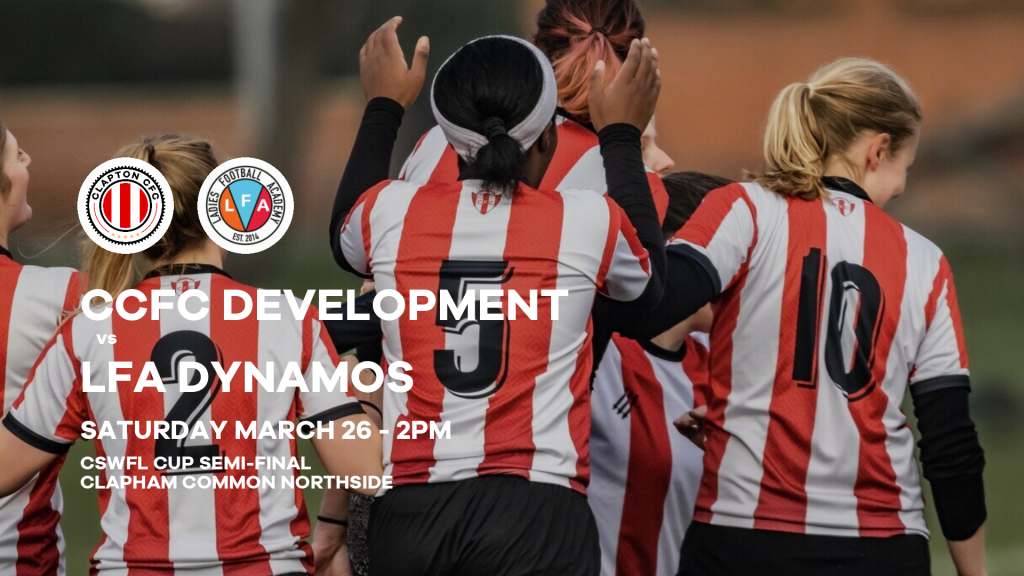 It’s Non-League Day on Saturday when there’s an international break for men’s football and the focus traditional switches to the lower end of the pyramid.

The Clapton CFC men’s first team, however, do not have a game due to a quirk of the Middlesex County Football League fixture list.

If you’re looking for a grassroots game, you’re in luck as our CCFC women’s development team play a big cup semi-final.

It’s an extremely tough tie against LFA Dynamos, who will lift the league title trophy if they win their final game of the season.

In our two meetings in the league, we lost 4-1 and 7-2, although both games were close until late into the second half.

Should we win this semi-final, we will face either Rising Ballers or BrazUKa United in the final on Saturday, April 2.

Our Development team have competed well in their first season after being promoted to the Clapham Women’s Saturday Football League Premier.

They finished sixth in the division, enough to save them from relegation, though were within a win on the last game of the season from finishing fourth.

The Development team had a rocky start to the season, but in recent weeks they have gone from strength to strength. Even the losses have been agonisingly close to being victories.

Top scorers this season have been Fae Fulconis with 12 and Teju Callisto with 10, while five players are tied on two player of the match poll wins each.

Many of the development squad have stepped up to the first team duties, such as Sophia Axelsson, Allana Scoble, Mari Mogstad Eri, Annie Bartkowski and Rhianne Wright.

The coach will be familiar as first team assistant manager Brian Bramble is the head coach.

it would be great to see a decent turnout for this game.

CCFC member Jamie Whale has been to several of the games, including tweeting goal updates, so we asked him for his thoughts on the season….

I’ve been to watch the team five times this season so far My first visit in November coincided with the first of two back to back wins, and there’s been four wins out of nine in the league and cup since that upturn in form.

I’m a newcomer to women’s football but I see it as technical, the passing and finishing is up there with some professionals.

Season highlights would have to include two fine hat-tricks. Teju completed a first half hat-trick against Brazuka United wearing a bobble hat presumably blessed with magical powers, on one of the coldest mornings of winter, whilst Fae scored four and assisted two against Camden Eagles including a memorable free kick straight over the stranded goalkeeper from over 30 yards out. Essie Routledge scored another goal of the season contender in that game, too.

If wanting to drink something stronger there are plenty of options in Clapham – I’d recommend the Prince of Wales in Clapham Old Town or the CAMRA-endorsed King & Co a few minutes walk beyond Clapham Common tube station, on Clapham Park Road.