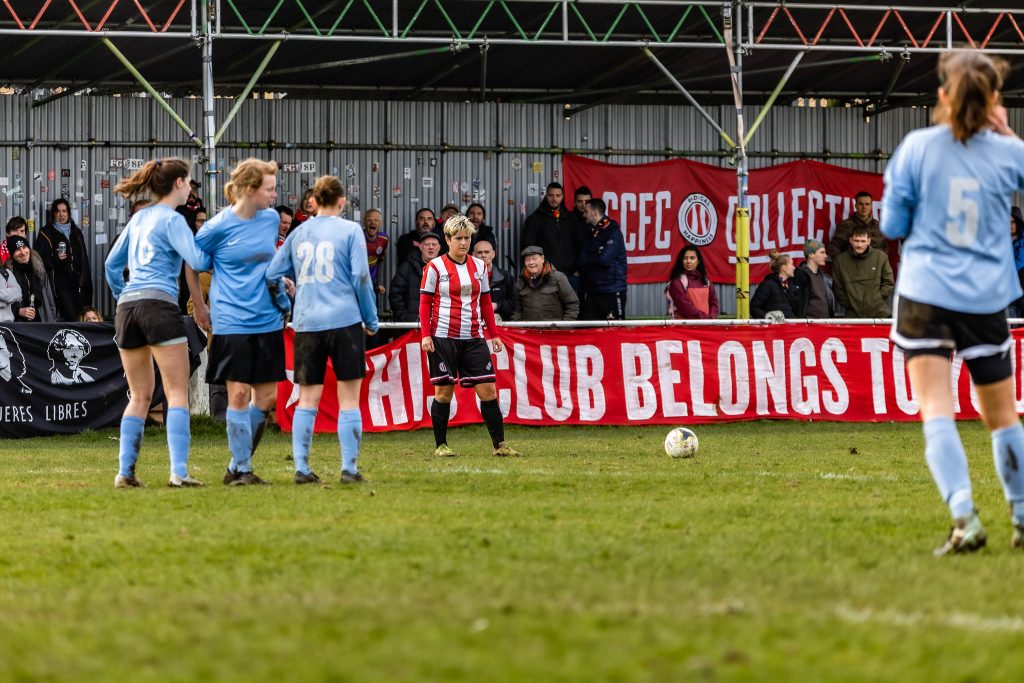 Every run has to come to an end at some time. And so it was that the women’s first team lost their first league game of the season, and indeed the first at home for 17 months.

Away day specialists Comets – with arguably the best form on the road in the division – were the ones to finally beat us on the Stray Dog.

In truth it was a deserved win for the visitors, though it wasn’t for the lack of effort or possession from the Tons. It just wasn’t our day.

On the bright side, although it’s tight at the top, promotion is still in our own hands as long as we return to form as soon as possible.

And there were impressive debuts for Mari Mogstad Eri on the left wing and midfielder Ella Bonner from the bench.

There were early chances for the home side, with Marta Boiro almost curling a corner into the net, and Lenny Holmes blasting just wide.

But 20 minutes in, and two goals in a minute for the Comets gave us a mountain to climb.

On the half-hour mark, we were back in it with a goal through Boiro’s tenacity. She charged down a clearance, took the ball into the area and then beat the keeper with a superb finish.

But within three minutes, Comets had restored their two-goal lead with the best goal of the game, a strike from 25 yards that Polly Adams had no chance of reaching.

Annie Lyons went closest to a second, having a shot from the edge of the six-yard box from a Boiro free-kick.

It was 3-1 at half-time, but soon the Tons were back in contention.

Mogstad Eri was growing in confidence down the left wing and delivered a perfect cross – or was it a shot? – that evaded the Comets keeper and was nudged in by a defender.

It was going in anyway, so it was rightly credited to her.

Again, it only took a few minutes for Comets to restore their two-goal lead, with a rare defensive error.

There was still 40 minutes left to claw ourselves back into the game, and CCFC pretty much camped out in and around the Comets penalty area.

There were several goalmouth scrambles, Mogstad Eri hit the outside of the post, and Verity Phillips put the ball in the net but the linesman flagged for offside.

But the goal never materialised, the comeback didn’t happen, as the Comets saw out the game for a 4-2 win.