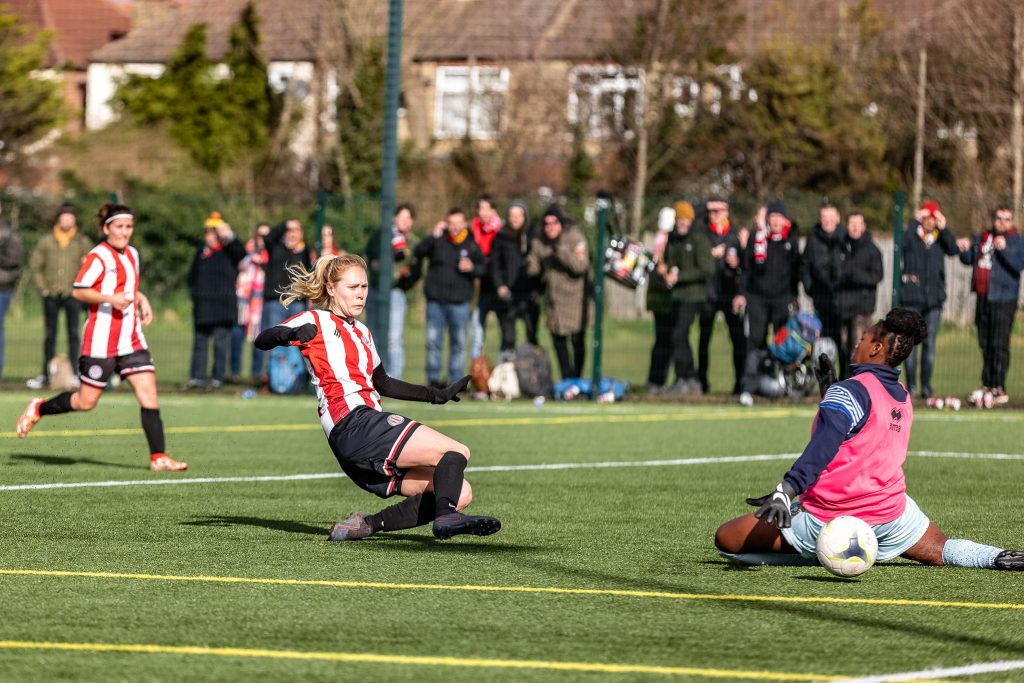 A fourth penalty shoot-out win of a memorable season fired Clapton CFC into the quarter-final of the John Greenacre Memorial Trophy.

However, the team had to battle back from 2-0 down against a strong Queens Park Rangers Reserves side who are top of the division below.

QPR were only able to field 10 players and swapped keepers during the game. Despite the setback, they scored within the first 30 seconds, with a cross from the byline knocked home.

It was an early wake-up call for the Tons and they responded well with a string of chances. Marta Casanovas lifted a shot from outside the area just wide, while Maria Mendonca and Marta Boiro had runs into the box well blocked.

Emily Link had a shout for a penalty after a challenge in the box and then Mendonca again had a shot from distance.

However, on the breakaway QPR Reserves extended their lead, with a cross from the left headed past Polly Adams for 2-0 with just 15 minutes gone.

CCFC kept plugging away, however, with Lucy Spours shooting well from distance but the ball drifted just over the bar.

Just before the half-hour mark, the Tons grabbed a goal back from a very familiar move – a defence-splitting pass from Spours which Link controlled and slotted past the advancing keeper.

It was full steam ahead for an equaliser, and Mendonca was played through for a one-on-one chance only to be hauled back for offside.

But on 35 minutes, the leveller did come, from another familiar route. Boiro curled a perfect corner high into the corner, just out of reach of the goalkeeper and the defenders on the line.

Within a minute, Boiro almost scored an exact replica, but a covering defender just managed to head it away at the back post. 2-2 at half-time.

Early in the second half, a corner from Mim Chadwick was almost bundled in, while sub Lenny Holmes had the ball in the net with a fine strike from a cross from fellow sub Kiki Marino, only for the offside flag to go up.

Mendonca had an effort from distance saved, then Link’s quick-thinking shot went over the bar when she spotted the keeper out of position.

However, it was the away side who scored next, with a QPR Reserves attacker dribbling and shooting from the edge of the box. Adams could only take the sting out of the shot then tried to claw it off the line, but it had crept in.

CCFC had just 20 minutes left to save the tie and soon forced the QPR keeper into action. She bravely dived and blocked to prevent a series of Tons players getting a clean strike in a goalmouth scramble.

However, on 73 minutes the equaliser came, with a cross from Link finding the head of Boiro, who guided it past the keeper. It almost seemed to hit the net in slow motion.

There was still time for chances at both ends – Adams plucking the ball off the head of the striker as she shaped to head it in, and Link having a shot saved with just moments left.

3-3 then at the end of an absorbing tie that neither side deserved to lose. But a winner was required, and it was straight to penalties.

You can watch the penalties in full over on our Instagram page.

For the Tons, Boiro scored, Link’s penalty was saved, Spours scored, Lyons hit the underside of the bar then Nutman scored. With two saves from Adams that meant it was 3-3 after the first 5 and straight to sudden death.

Marino scored, then Adams saved again, a superb dive to the left and a strong hand to keep it out. That was all over, a second penalty shoot-out win in successive Sundays.

It was tough on QPR Reserves to lose, but a fine achievement from CCFC to come back from 2-0 down to win.

We’re now in the quarter-finals of this cup – as well as the semi-final of the Capital Women’s Cup.