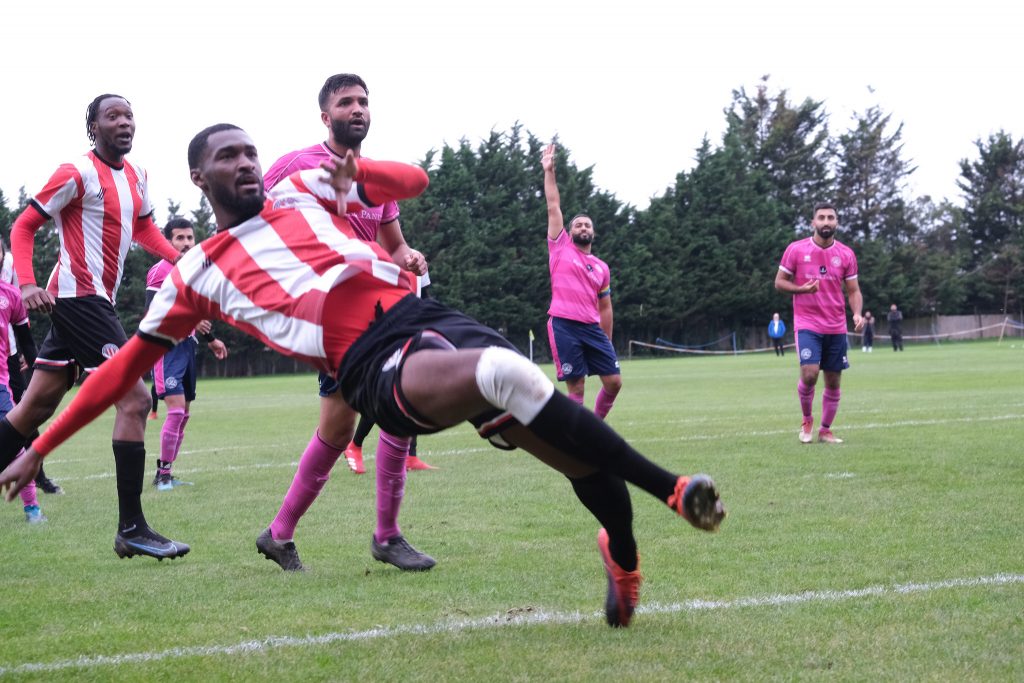 The ‘Gymhkana Jinx’ struck again as the Clapton CFC men’s first team lost for a third time in three games against our hosts.

A bad-tempered game also saw only the fourth ever red card in the CCFC era, along with a long list of yellows for both sides.

It was a makeshift Tons side which travelled to Osterley, particularly missing the attacking threat of Noah and Josh Adejokun, Lewis Owiredu, Sherwin Stanley, Julian Austin, Eliot Crosbie, Jake Stevens and Aaron Yfeko.

However, there were players who could cause damage, including in-form striker Fred Taylor and top scorer Arthur Wright on the bench as he recovers from injury.

Indeed in the first half, Taylor had the ball in the net but ruled out for offside, and was controversially flagged for offside when played clear on a one-on-one.

Meanwhile Tafari Nicholas, playing in an unusual left-back role, also found himself in unfamiliar territory in the opponent’s box, but after controlling the ball and evading two challenges, could only fire straight at the keeper.

It was Indian Gymkhana who had the better chances, however, rattling the crossbar from long range then Jack Francis diving acrobatically to keep out the follow-up shot.

And on 26 minutes they scored the crucial first goal, with a deflected shot giving Francis no chance.

In the second half, there was no lack of effort, but aside from James Briggs‘ dead balls and fellow sub Wright’s shot well over the bar, the Tons barely threatened. Well-worked goals for Indian Gymkhana in the 69 and 81 minutes wrapped up the contest.

An ill-tempered game saw yellow cards handed out to (we think) Cemal Agdelen, Samba Badjana, Reece Bartholomew and Briggs, while Musa Manneh received two and was therefore sent off.

To make matters worse, Nicholas had to come off early on having just returned from injury, while Wright did not last long on his comeback before limping off.

A bad day in the office all round ending the run of 11 away wins in a row, but the team remain in the top two and will look to start another unbeaten run.