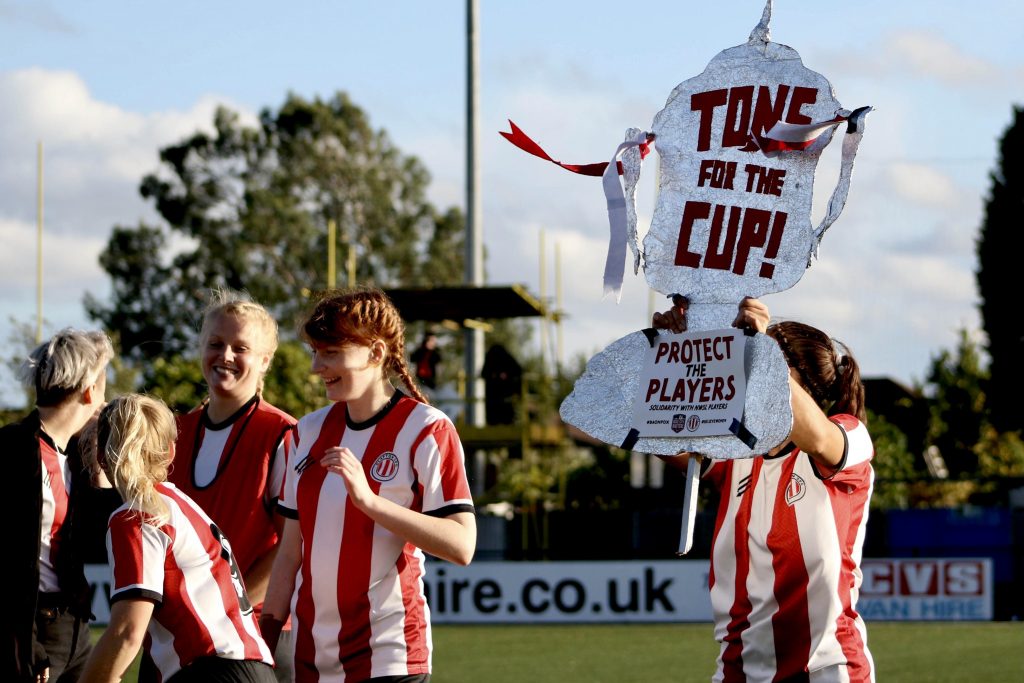 With Biggleswade within 40 minutes of Finsbury Park on the train, and the club’s Second Meadow Stadium a short walk away from the station, we’re hoping for another good following.

The Tons got here after a bye in the first qualifying round and then an amazing cup upset in winning 6-3 away at Haringey Borough in front of over 200 travelling fans.

That was the first time either the women’s or men’s first team had beaten a side two divisions higher in the CCFC era.

Biggleswade, whose chairman is football journalist Guillem Balague, play in the Eastern Region Women’s Football League Division One, which is a level higher than the Tons.

They are second top of their league so far and beat Headstone Manor, who play in our division, away 3-2 to reach this round. We drew 1-1 with Headstone at home the following weekend.

Two attacking players to look out for are Tayla Murray, with seven goals in seven games, and Samaira Khan with five in just three games.

During the 1970s and 1980s a previous incarnation of Biggleswade United were among the top ranking teams in women’s football in England and reached the Women’s FA Cup quarter-finals twice.

In CCFC’s debut season in the Women’s FA Cup in 2018/9, we played two home games at the Stray Dog, winning 6-3 against Margate then lost 3-2 against Oakwood, with a combined attendance of 571.

Last season we missed out on the competition entering due to Covid-related league administration delays but we’re back and ‘only’ 8 more wins from Wembley.

Admission is free but donations at the entrance to their charity partners Keech Hospice are welcome. Match programmes will also be on sale, with all profits going to Keech too.

Biggleswade are opening the tea hut for the sale of hot dogs and pasties and hot and cold drinks. The clubhouse and bar will also be open throughout the afternoon. The tea hut is cash only with contactless payments avaiable in the clubhouse.

There’s an hourly train from London to Biggleswade. Journey time is 42 minutes from Kings Cross, and 36 minutes from Finsbury Park and return tickets cost from £15.40 and £14.40 respectively.

The ground is a 15 minute walk from the station.

if you’re driving, please park in the Dan Albone car park, which is free at the weekend. It is short walk along the footpath, which runs adjacent to the cricket pitch next to the ground.

Life for the team started as Bedford Catarans in the mid 1970s when women’s football began to flourish following the the lifting of the ban on women playing football in the late 60s.

Sadly, the association with Bedford Town was short-lived as they were cast aside by the club who preferred their Under 17s boys to use the ground on a Sunday afternoon.

For the next ten years they were one of the few clubs in England to be given equal billing to the men’s team in every respect.

Their facilities were the envy of many of rivals at the time with famous names like Friends of Fulham, Millwall Lionesses, Spurs Ladies and even Arsenal still just playing on local park pitches.

Biggleswade United Ladies played in the South East England League and then the Midlands League during which time they enjoyed a great deal of League and cup success.

The side reached two WFA Cup quarter finals losing out to Doncaster Belles in 1986 and Notts Rangers in 1989 and also won two National 5-a-side competitions.

Having reached their peak in 1989 (and certain ages) the team decided to call it a day with some players going on to continue playing for other clubs while others hung up their boots.

Fast forward 30 years and in 2018 members of successful girls’ club Shefford Town contacted Balague, who had made it well known that he was keen to add a Ladies team to the United family.

The reborn Biggleswade United women’s team were welcomed with open arms and as with their predecessors, became part of the club on an equal footing to the men’s side.

Further to Balague’s ambitions to make Biggleswade United the most successful women’s side in Bedfordshire, they were approached by the Eastern Region Women’s League to enter a side in the league and introduce a side at Step 6 of the Women’s pyramid.

It was an offer they couldn’t refuse and a massive closed-season recruitment process began. Overseen by the Ladies’ Technical Secretary, Giacomo Mallamaci, they managed to increase the squad size to have two women’s teams – Reds and Blues.

The Reds team started life in the ERWFL Division One and under the coaching team of Luke Molloy and Ashley Pead have made an excellent start to their “story” including Sunday’s Vitality Women’s FA Cup tie 3rd Round qualifying tie.

The Blues continue in the Beds and Herts League Division One and have had an equally impressive start. Under the coaching team of Simon Brown and Bradley Jones they made it through to the second round of the County Cup last week and sit in a comfortable mid table position.

The current teams have a lot to live up to achieve the success of their 1980s predecessors but with the support of the club behind them, the facilities, coaching staff and supporters, success may well come their way very soon.