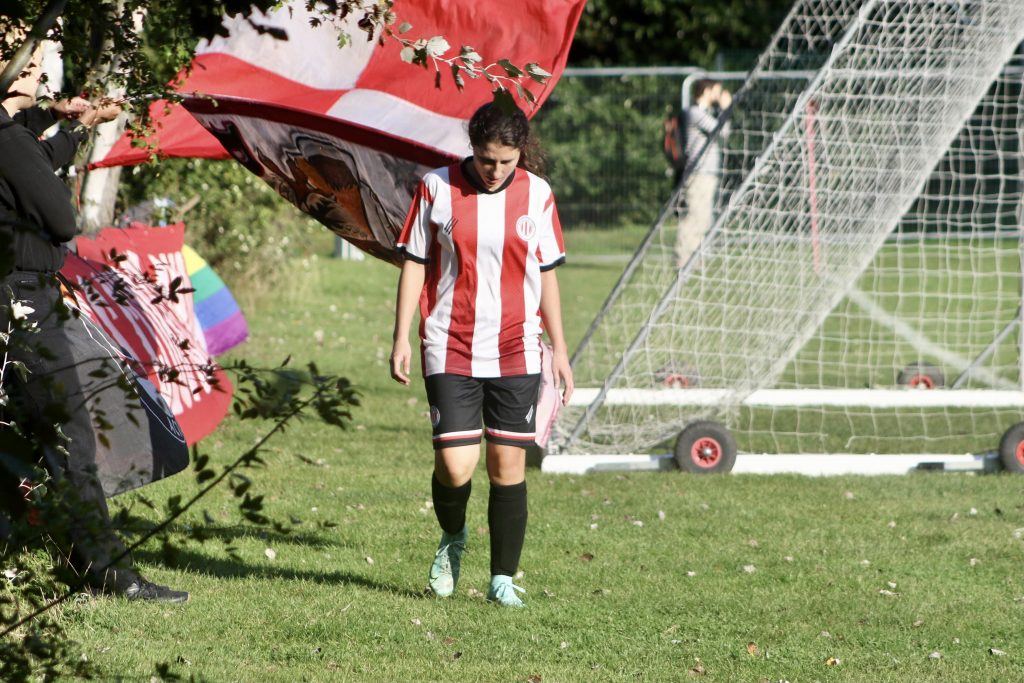 Sometimes, in football, the game seems to follow a pre-determined script.

After all the goals, drama and elation of last week’s FA Cup victory on the road against Haringey Borough came the inevitable: a cup hangover, cup come down or whatever you want to call it.

But this is why we love football, right? Because a frustrating home draw, follows a euphoric cup victory as sure as night follows day.

There were a couple of changes to the starting line-up from last week. Coach Gomes opted to start Mim Chadwick at left back (in for Lenny Holmes) with Kiki Marino replacing last week’s goal scorer, Annie Lyons at centre-back, which shows the strength in depth of Claudio Gomes’ squad.

There was a strangely muted atmosphere when the game eventually kicked-off. It was held up by the manager of the junior team who had played previously, who insisted in conducting his post-match debrief on the pitch oblivious to the fact that Clapton and Headstone were ready to kick off.

A healthy crowd of 180 had made their way to Wadham Lodge’s mysterious ‘Park Pitch’ that was hosting the game due to standing water on The Stray Dog.

But without a roof, it was hard for the Clapton fans – even ably supported by youngsters from the Young Tons and Akwaaba – to generate any noise.

Both teams seemed subdued too, with the opening stages of the match played in an eerie silence.

Clapton had a chance from a Marta Boiro corner early on, but the game remained finely poised with a lot of congestion in the centre of the park. Emily Link came close stretching the Headstone keeper.

But it was one of those games where the ball just didn’t seem run for the Tons. Passes were slightly off, players runs just out of synch. Nothing was clicking.

Then on 37 minutes the visitors went ahead. It was their first shot on target. A looping shot that evaded Polly Adams’ outstretched arm and into the roof of the net.

Coach Gomes switched things up with a double substitution that saw Holmes and Lyons restored to the defence in place of Verity Phillips and Mim Chadwick. The Tons went into the break in the unusual position of being a goal down.

Things continued in a similar vein after the interval. Whilst it would be easy to focus on the Tons’ deficiencies, a lot of credit should go to the visitors. They were extremely solid across the back line and in midfield. They read the game superbly, intercepting passes and snuffing out danger before it occurred. The visitors’ No. 18 cut out every attempt at a through ball, with No.15 not far behind her in the interception stakes. And for the first time this season, an opposition fullback (No. 5) had Maria Mendonca in her pocket for much of the game, reducing the threat down the Clapton left.

Not long after, Ciara Robinson replaced the hard-working Marta Casanovas on the right wing. And it was Robinson’s cross that set up Marta Boiro for the Clapton equaliser. It was Boiro’s second headed goal in as many games, as she bundled the ball over the line, much to the relief of the Clapton players, bench and support.

There was one last chance to win it, when a Boiro in-swinging corner had the keeper scrambling and saw Mim Chadwick (who had returned to the action) watch on as the ball bounced off her and looped over the crossbar.

It hadn’t been a great day at the office for the Tons, but they emerged with a hard-won point. We will hope to get back to winning ways next week when we take on Walton Casuals Ladies Reserves at The Stray Dog (weather permitting).