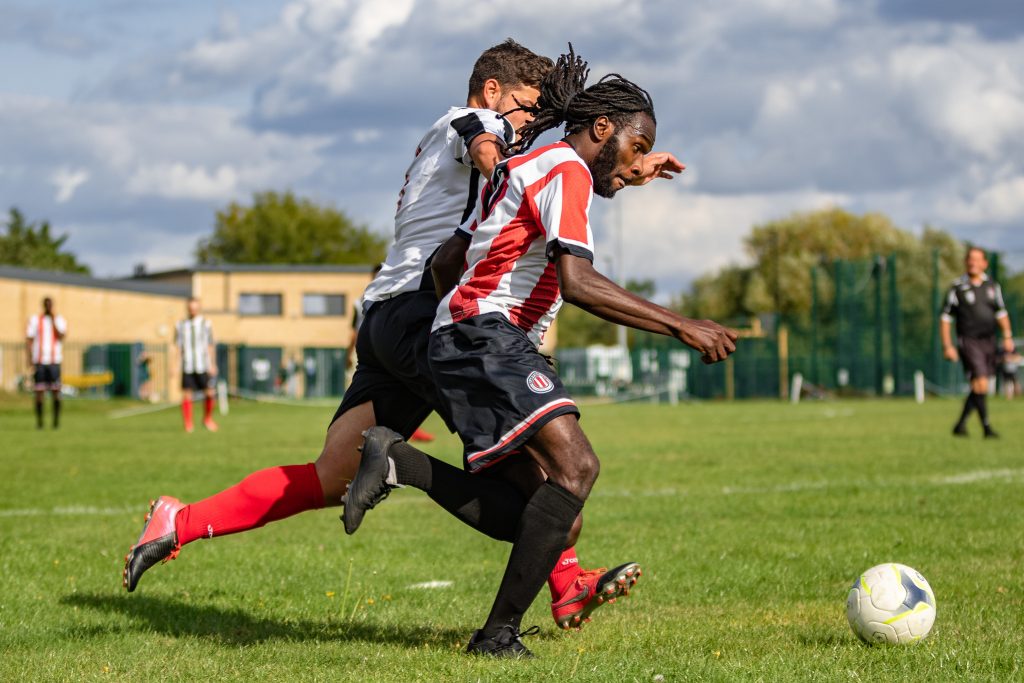 The Clapton CFC men’s first team have continued their strong start to the season, making it four out of five, with 17 goals scored, four wins on the trot and a position at the top of the table.

The Tons travelled to Northolt to face Larkspur Rovers with three changes to the lineup that beat AVA the week before. Jack Edwards made his debut in central defence, with Fama Sangare coming on at right-back and Taylor replacing Yfeko upfront. Returning favourite James Briggs was on the bench.

The game started slowly, with neither side managing to create clear cut opportunities for the first 25 minutes. On the 26th minute, however, a flowing Larkspur counter-attack forced Jack Francis to make a brilliant save down to his right.

On the ensuing corner, the Tons keeper, later voted player of the match, kept us in the game again with another great save from an overhead kick.

Around the 34 minutes mark, a horrible two-footed challenge on Sangare led to calls for a red card. Unmoved, the ref affirmed his commitment to the unwritten rule of non-league refereeing (beautifully explained here) by not sending the offending player to an early bath.

Just as the first half looked destined to end goalless, with one minute to go Arthur Wright received a ball from Dean Bouho on the right. He dribbled past an opponent and fired a low cross to the box, a moment brilliantly captured on camera.

Fred Taylor was in the box and got the final touch on the ball. 1-0 to Clapton!

The second half started fast and furious. Within the first minute, Wright played Sangare on the right. With time on the ball, the full-back put in a quality cross into the box, which Wright volleyed off target.

Just a few minutes later, it was the hosts’ turn to attack down the right side, with a low cross followed by a weak shot.

On 50 minutes, their number 9 was fouled outside the box for a dangerous free-kick. The shot came high around the centre of the goal, and Francis tipped it over the bar.

A couple of Larkspur corners followed, the second resulting in a dangerous header hitting the bar. The score was still 1-0 to the Tons, but only just.

On the 55th minute mark, Francis caught the ball from a corner and launched a long pass forward. The fast counter-attack saw Noah Adejokun with the ball on the edge of the box, where he skillfully evaded a defender and then tried to dribble round the keeper, who got a touch on the ball.

Arriving on the box at the right time, Wright blasted in the loose ball. 2-0!

4 minutes later, Josh Adejokun received a brilliant pass over the head of the last defender and came face to face with the opposing goalkeeper. Channelling his inner Benji Wakabayashi by wearing a cap since conceding the second, the goalie rushed off his line. Josh tried to lob him but sent the ball over the bar.

On 62 minutes, a quick Larkspur counter saw a low cross from the right meet their striker in a great position, but he sent it wide.

The Tons continued to assert themselves on the game and created a few good chances with about 20 minutes left on the clock. First, Noah Adejokun played a lovely reverse through pass to his brother Josh, who fired a low shot, tipped round the post by the keeper.

Not long after, Noah played in sub Bartholomew on the right but the Larkspur goalkeeper again saved with his foot. Piling on the pressure, Tons midfielder Badjana tried a couple of long shots but sent the ball wide on both occasions.

Despite being outplayed up to this point, Larkspur Rovers would not give up the 3 points easily. On 83 minutes, a deflection to a long pass made it difficult for the Tons defenders to clear. A Rovers forward came face to face with Jack. His low shot hit the post and Jack gratefully caught the rebound.

2 minutes later, another chance for the hosts. Their forward was brought down as he tried a shot inside the box. There were strong calls for a penalty and the ref went to have chat with the linesman. It was the closest to a VAR experience you are likely to get in non-league.

The penalty was finally given and taken by the opposing number 5. A low shot to the left sent Jack the wrong way – goal for Larkspur Rovers.

The home team surged forward in search of an equaliser, but their best chance in the final minutes was flagged for offside.

Maybe it should have been a less nervous end to the game, but not a single Ton was complaining by the time the referee blew the whistle for full time. To quote the great Bill Shankly – ‘Ay, here we are with problems at the top of the league.’

The noise of the faithful Clapton supporters was, by this point, only occasionally interrupted by that of the trains passing over the track that flanked one side of the pitch – a reminder of the journey home that awaited them, with the weekend’s reduced service on the Central Line.

Despite the TfL’s best efforts, however, it was to be a happy journey back to East London, with another 3 points in the bag.

Clapton CFC men’s first team next challenge is against Cricklewood Wanderers on the 18th of September, away from home.