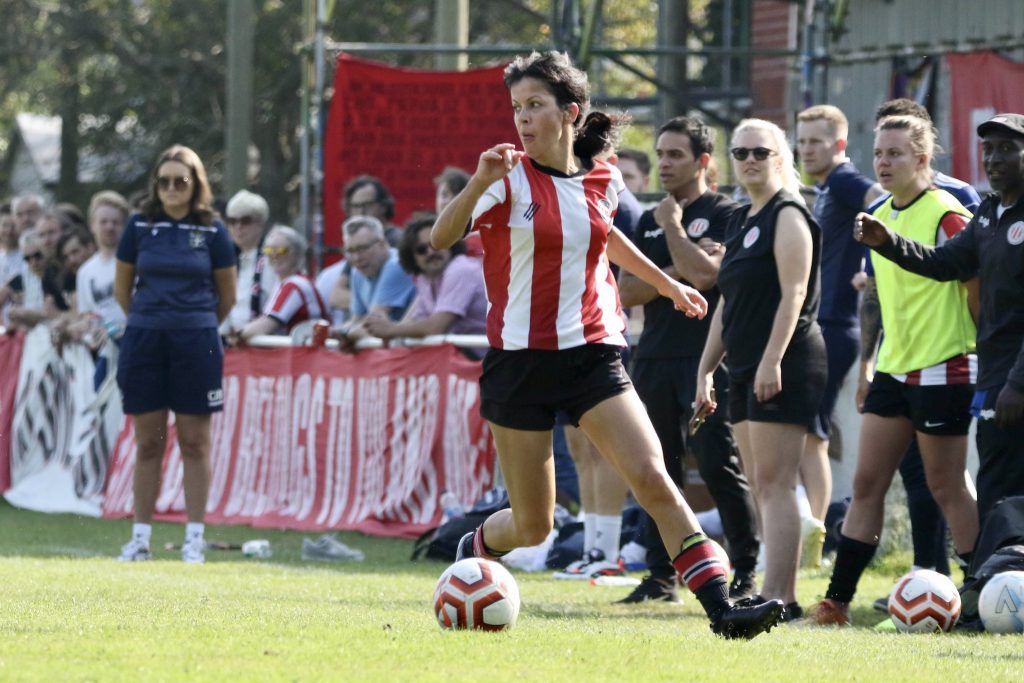 Not a cloud in the sky, and the Women’s First team was finally back in league action at the Stray Dog for the start of the 2021/2022 season.

The starting lineup was a mix of familiar faces, new recruits and a first First Team call up for Beginners graduate Rhianne Wright.

The first half was an even affair. Sutton had a particularly strong midfield and punished the Tons as they left a gap just in front of the back four. Luckily, Polly Adams is in fantastic form, and made a few brilliant and crucial saves to keep the scoreline 0-0.

Manager Claudio Gomes made a few suggestions to defensive midfielders Lucy Spours and Li Steiner, and just before the halftime whistle, it paid off. Steiner won the ball near the centre circle, and fired off an expertly placed and paced pass through to Emily Link, who had no issue beating the Sutton ‘keeper.

The second half was all CCFC. Shortly into the half, Link found the incredibly pacy Maria Mendonca, who fired off a shot which the Sutton goalie couldn’t keep out.

Not long after that, Mendonca was brought down in the box and the Tons awarded a penalty. Link stepped up and coolly secured her brace.

With 10 minutes left on the clock, Marta Boiro dribbled past several Sutton midfielders before finding Mendonca once more, and just like that, Clapton had a four-goal lead.

But that wasn’t enough. Just before the end of the game, substitute right back Allana Scoble pushed forward on the wing, and found Clapton debut Marta Casanovas. Is there a better way to end your debut game than scoring a goal? Probably not, which is why Casanovas made sure she got one.

5-0 to a rampant Tons. A fantastic start to what should be a glorious season.