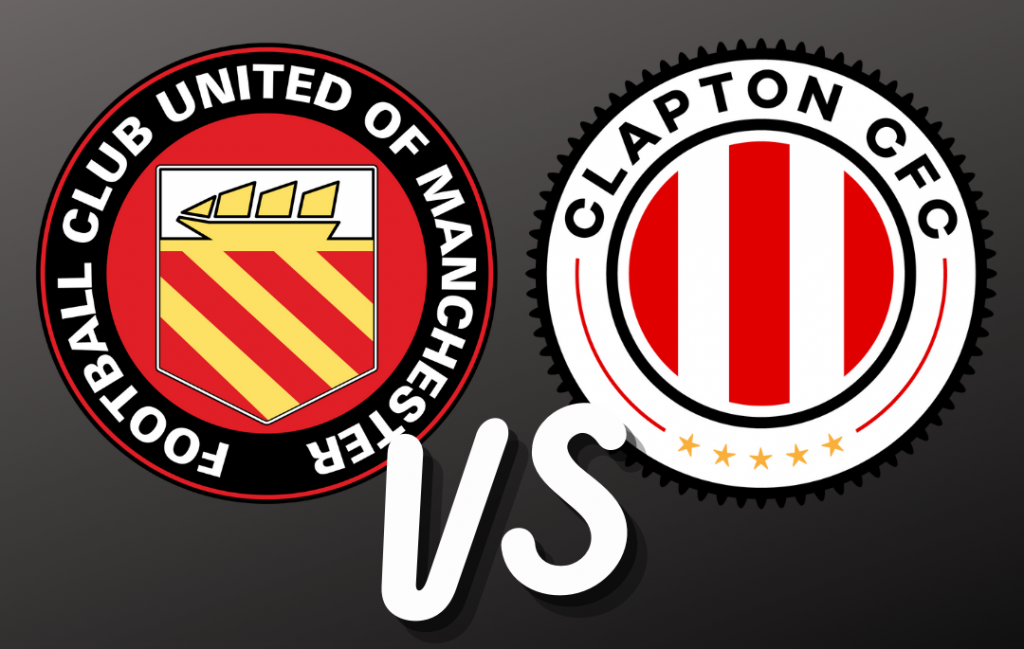 The waiting is nearly over and Clapton CFC’s visit to FC United of Manchester on Saturday, August 7 for a pre-season double header is only days away.

The celebration of fans-owned football will take place at FCUM’s Broadhurst Park with two games back to back.

FC United are, of course, the trailblazing fans-owned club who set themselves up to protest against the take-over of Manchester United by the Glazer family.

They have risen rapidly through the men’s and women’s football pyramids, while off the pitch they’ve built up their own stadium that’s become a vital community hub. Something to inspire all CCFC members, for sure.

This is the third major Clapton CFC away friendly trip, following on from men’s team games at CE Jupiter in Barcelona in April 2019 and Roter Stern in Leipzig in August 2019.

Our women’s first team will play for a Football Supporters Association trophy, the first time the FSA have awarded a cup in the women’s game.

The trophy will commemorate 100 years since the FA ban on women’s football was introduced, and 50 years since it was overturned.

We’re not sure about the details yet, but it will likely be similar to the The Supporters Direct Trophy, the invitational cup game competed for annually between fans-owned clubs. Our men’s first team competed for the cup in 2018 – losing 4-0 to Enfield Town.

The FCUM women’s team have just been promoted to Tier 4 (compared to CCFC at 7) having been second in the North West Womens Regional League table when the season was abandoned.

They’ve had a change of manager in the summer with Tom Fitton, former Sheffield United and Manchester United coach, appointed this month.

So far this pre-season they’ve had two 5-1 wins, against West Didsbury & Chorlton and Wem, a 4-2 win over Leek Town, a draw with Merseyrail, and two defeats against Burnley and Brighouse Town.

Meanwhile this will be CCFC’s second game of pre-season only, following on from the 1-0 defeat at Brentford on Sunday. Our season doesn’t start for another month.

This will be the last pre-season friendly for both teams, a week before the start of the 2021/2022 season.

FCUM are the highest placed team in the English pyramid CCFC men’s first team have faced, jointly along with Enfield Town in 2018 (a 4-0 defeat).

This pre-season, the Tons have played one team three divisions higher (a 3-1 defeat to Barking) and another five teams in and around our same level, for which they went unbeaten.

FCUM manager Neil Reynolds is likely to rest his strong names and pick youth and squad players for this game. With a four tier gap, however, they’ll still be huge favourites to win.

So far this pre-season, the Red Rebels have beaten Step 5 teams Darwen 10-0 and Macclesfield 1-0 and Step 7 side Fulwood Amateurs 2-1. Against Step 3 Enfield Town, for the Brian Lomax Supporters Direct Trophy, they won 3-1.

There are no advanced tickets for sale, it’s pay on the day only for all supporters, home, away or neutral.

Admission is £9 adults, £5 concessions, £2 juniors, with free tickets to M40 and M9 postcode residents (see FCUM website for more details on that).

Turnstiles open at 12.45pm and will be cash only. To pay by card, you’ll need to go to the stadium reception.

Meanwhile the Miners Club across the road is very welcoming to FCUM and CCFC fans alike.

Broadhurst Park was the first new ground to be built by a supporter-owned football club – just beating AFC Wimbledon to that honour.

Covered on all sides, with standing and seating in the main stand and with a large and expansive home standing area behind the goal, FC United’s purpose-built 4,400 capacity new ground shows what can be achieved when football fans with a vision work together and make things happen.

Tram – the nearest stop is Newton Heath & Moston on the 5 East Didsbury – Rochdale Town Centre line. It’s a 10-minute journey from Manchester city centre and from there it’s less than a mile to Broadhurst Park.

Shuttle bus – FCUM run a shuttle service from the city centre to the ground. More details on the FCUM website.

Car park – limited car parking is available at the ground for £5.

More on the travel options to the ground on the FC United of Manchester website.