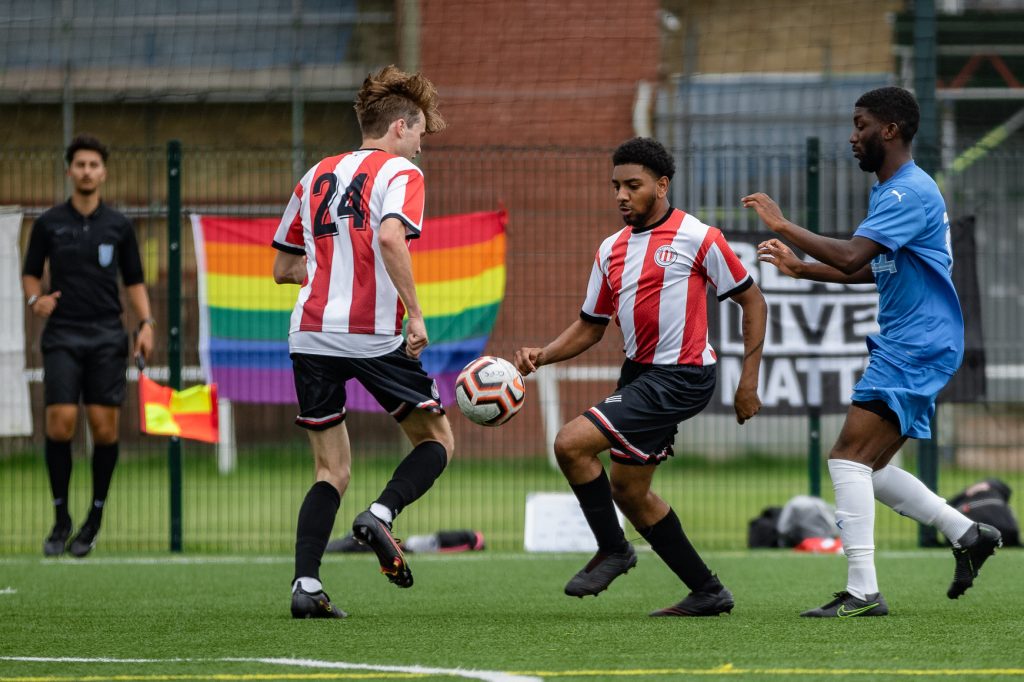 Many of last season’s big names are still missing, but player-manager Geoff Ocran called upon those who have performed well in pre-season so far, such as development winger Troy Cleghorn and teenager Fama Sangare.

Two trialists, in defence and up front, were also handed another chance to impress, while Arthur Wright got a first chance to play behind the striker.

In the corresponding friendly last season, Dunmow Town eased to a comfortable 3-0 win behind closed doors at the Wadham Lodge Stadium.

It was a role reversal this time, with Clapton CFC looking in control on the 3G next door. There was only a modest crowd to see it, given the rival attractions of the Old Spotted Dog Ground open day.

In a goalless first half, the Tons’ best chance fell to the trialist centre forward, whose shot was saved low.

Just before half-time, the Royals’ keeper took a nasty injury in a collision. With no sub keeper, an outfield player was forced to wear the gloves.

Two goals in quick succession in the second half seemed to have put the game to bed, both of which the stand-in keeper had no chance.

First sub Aaron Yfeko burst through to score. Then Troy Cleghorn blasted home in the box from a cross.

There were chances to make it more comfortable – not least when sub Tafari Nicholas‘ powerful header was saved – but with 15 minutes to go the game changed.

Dunmow were awarded a penalty for a perceived trip by keeper Jack Francis, despatched down the middle to make it 2-1.

The visitors had struggled to create chances so far, but were now firmly camped in the Tons half, and had a succession of appeals for a penalty to level it. However, CCFC held on for second win in a row as pre-season takes shape.

Next up for the men’s first team it’s friendlies against DTFC at home before the visit away to FC United of Manchester… and then the league season start on August 14.