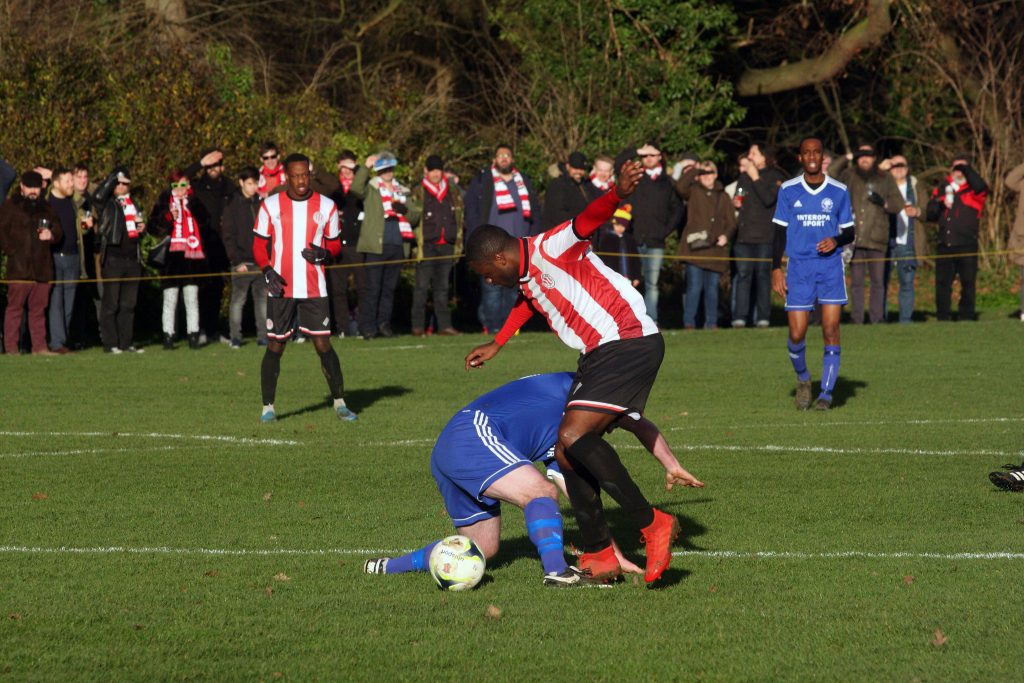 Due to the unprecedented recent deluges of Storm Ciara and Storm Dennis we’re giving the Wadham Lodge pitch a breather and going back to Hackney.

The Mabley Green all-weather pitch has a big terrace running the length of the pitch and we’ll make it as homely as possible.

The men’s team played Sporting Hackney in a friendly there in summer 2018 while it’s also the home of our women’s Super 5s team and open training.

These two sides last met at the start of 2020, with Brentham achieving the greatest result in their 100-year history – or so it seemed with their boisterous celebrations anyway – by netting a late, late equaliser in a 2-2 draw against the Tons.

In a scrappy game with a number of bookings, Sherwin Stanley and Lewis Owiredu put Clapton 2-0 up before the Brentham fight back.

The match was of course memorable for the red card shown to assistant manager Stu Purcell – however he has now served his one-match ban, completed the FA’s Referees Respect Module and has promised to be on his best behaviour.

Since the last meeting, Brentham have remained unbeaten in the league, beating NW London and PVC Victoria, both tough opponents for the Tons, and a surprising draw against Yeading Town.

The leaders boast the league’s top scorer, Edward Clements, with 22 goals already including both in our draw earlier this season.

They however aren’t one of the teams who have applied for promotion, with their home pitch not meeting the necessary ground grading requirements.

The Tons do have a number of games in hand heading into this game and will be hoping for a repeat of last season’s late surge up the table which saw a last-day title win.

Clapton CFC men’s team remain unbeaten at home so far – in fact they’ve not lost a competitive home game for over a year – but will have to adjust to different surroundings to get a result.

A Brentham spokesperson told us about their season:

It’s been a good season so far in the league with some particularly pleasing performances at times.

We have had mixed fortunes since our first fixture in January, with 2 wins and a draw in the league since.

We look forward to a competitive game in what will surely be a crucial match in the run in.

There will be no food or drink for sale, so please bring your own refreshments, but otherwise it’ll be just like any other matchday.

Several bus routes stop right outside and there are 50 car park spaces too.