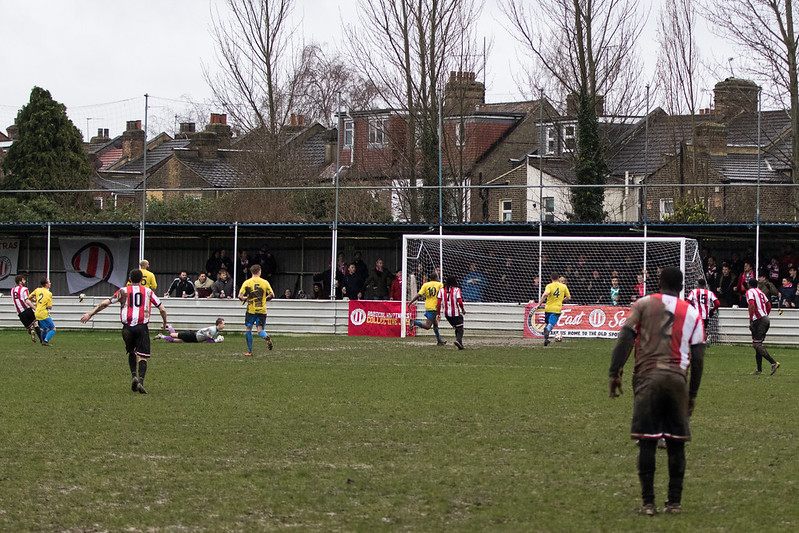 Before this game, Larkspur had been in red hot form – possibly the most in-form Spurs in London. But Geoff Ocran’s team produced a patient, controlled performance to break down the West Londoners in the second half.

The Clapton starting lineup was so strong it should be illegal at this level.

Returning heroes Josh Adejokun and Eliot Crosbie had Tons fans confident that they could compete against their high-flying visitors.

In the end, it was a couple of moments of ruthless class from relative new boy Julian Austin that propelled the Tons to a vital three points.

Calm before the storm

Even before the match, the Wadham Lodge pitch wasn’t in great nick. And with the brewing storm threatening to become our least favourite Denis since Thatcher, conditions were not going to improve.

The opening period played out with only a few half-chances, mostly at the correct end, in the pre-deluge drizzle.

Clapton were racking up the corners. One effort on eight minutes from Liam Smyth took a combination of the Larkspur goalie and the bar to prevent it from flying straight in.

From another corner, centre back Jordan Odofin tried a bicycle kick. One of these days, he will pull this off and it will be beautiful. Alas, it wasn’t today.

Here you can see his iconic look: half red/white, half mud down his sliding side.

But for all the Clapton pressure, clear-cut chances were hard to come by.

Perhaps the best of the first half was when Adejokun burst past the away defenders. However, the ball ran away from him on the unreadable surface and the keeper managed to knock it wide.

Cemal Agdelen was playing a blinder. The midfielder was breaking up any Larkspur attempts to play through the centre of the park.

That Jack Francis’ shirt was still pristine green at the end of the half – despite his box being one big puddle – showed how well they had contained the opposition threat.

In the second half, the wind picked up and was now at Larkspur’s back. They began to create a couple of chances. A long range effort was pinged off the juncture of post and bar.

Then on 58 monutes, the Tons went in front from a quick counter.

Lewis Owiredu crossed from the right. Sherwin Stanley was barged out of the away by a defender. It came through to Adejokun who laid off for Austin, who kept his cool to evade a last ditch tackle and whacked it in off the base of the post.

Ten minutes later and Clapton had a second.

Smyth played a perfectly weighed ball down the line to Adejokun. The winger bustled in, the bustled in some more, but Larkspur couldn’t get the ball off him. When he eventually cut back, it broke to Austin.

The on-form midfielder still had what seemed like every player on the pitch in between him and the goal. But he saw a square of exposed net and that’s exactly where he put it.

Rather than having to hold off a fightback, it was the Tons who were looking for more goals.

It should have been three when Noah Adejokun, just subbed on for his brother, had a chance in the box with the Larkspur number one at sixes and sevens. But he snatched his shot just over the bar.

The win sees Clapton hop over Larkspur in the table ahead of the visit of league leaders Brentham next week.

Football aside, Saturday was a meaningful one for as we payed tribute to one-time Ton Rob Teppett.