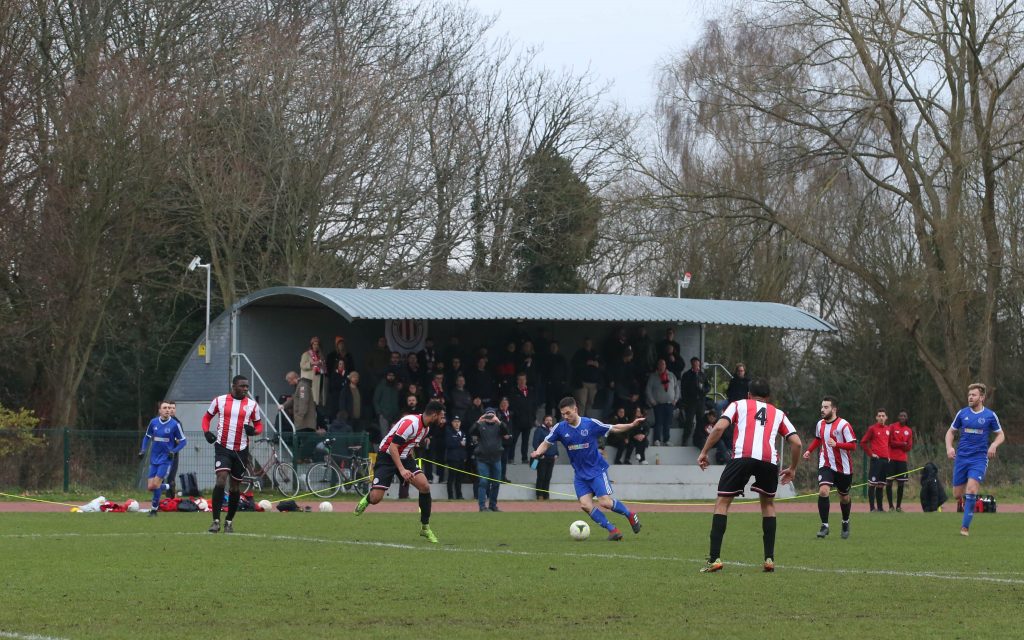 Against Stonewall on Saturday, they cleverly let the home side get their 2-2 equaliser in the first half, to leave enough time to score more goals.

Four more, as it turned out.

It started out like a game of basketball. After early action at either end, Stonewall were given an excellent chance to get in front.

Number five took a tumble in the box. Penalty.

Striker Ollie Rabie hit it weakly down the middle. Jack Francis dived and held the ball. But the lino thought the Clapton keeper had been fractionally off his line. Assistant manager and certified referee-respecter Stu Purcell bit his tongue.

Rabie made no mistake from the retake, rolling it into the corner.

The Tons hit back instantly. Sherwin Stanley floated in a dangerous cross-shot from the right. It floated over stranded Stonewall keeper Dennis Aware’s head into the net.

Lewis Oweridu was making a nuisance of himself, dancing and darting down the line.

He should have scored when Aware rushed out of his box and failed to get a head on a throughball. Owiredu passed it towards the empty goal, but it lacked pace and a defender was able to rush back to clear.

He did get on the scoresheet on 15 minutes with an efficient route one effort.

A Francis kick was flicked on by midfield header-winner Julian Austin. Fama Sangare picked it up, cut past a man and played a delightful reverse pass to Owiredu. The winger ran it in and blasted past Aware at his near post.

Terrific entertainment. If this rate of scoring had continued, we would have been looking at a 12-6 victory for the Tons. In the MCFL Premier, this kind of scoreline seems possible.

Just a few minutes later, Stonewall pulled level with a gorgeous goal. A diagonal ball was sent in from the left. Rabie ran onto it and guided a perfect header back past Francis.

On 33, they had a great chance to get back in front. A Stonewall forward burst through on goal and rounded Francis. He tried to squeeze in from the narrow angle. But Nick Loblack was on the line to block.

Right before the break, another opportunity for the home team. The very fast and very dangerous George Watmough beat Cemal Agdelen on the right and hared into the box. Dean Bouho was behind him, yet managed to cleanly hook a leg around to make the tackle.

The second half started with Stonewall still looking the more likely to win the tie. But two quickfire Tons goals knocked the stuffing out of the hosts.

On 55, another sweet assist from Sangare. Owiredu, from the right this time, ran in and popped through Aware’s legs.

With Clapton still under the cosh, another breakaway saw Owiredu free in the box. His hattrick finish was a neat turn and low shot. 4-2 Clapton.

Shortly afterwards, accidentally, Stanley found himself clean through on goal, about 30 yards out.

Instead of jogging it in and doing the striker thing, he decided just to lash an angry boot at it. The ball flew into the top corner. A classy, nonchalant finish from Clapton’s number nine.

Then Stanley was given the chance to complete his hattrick from the spot. He rolled it into the corner for 6-2.

The scoreline makes it seem easier than it was. But Stonewall had made things extremely difficult for the majority of the game.

The Tons will be hungry for another three points when they travel to play Hillingdon next Saturday. A repeat of the 3-0 win in the league cup back in September would do nicely.

Geoff, Lewis, Jack and Stu reflect on the match.

It was always going to be one of the hattrick scorers.