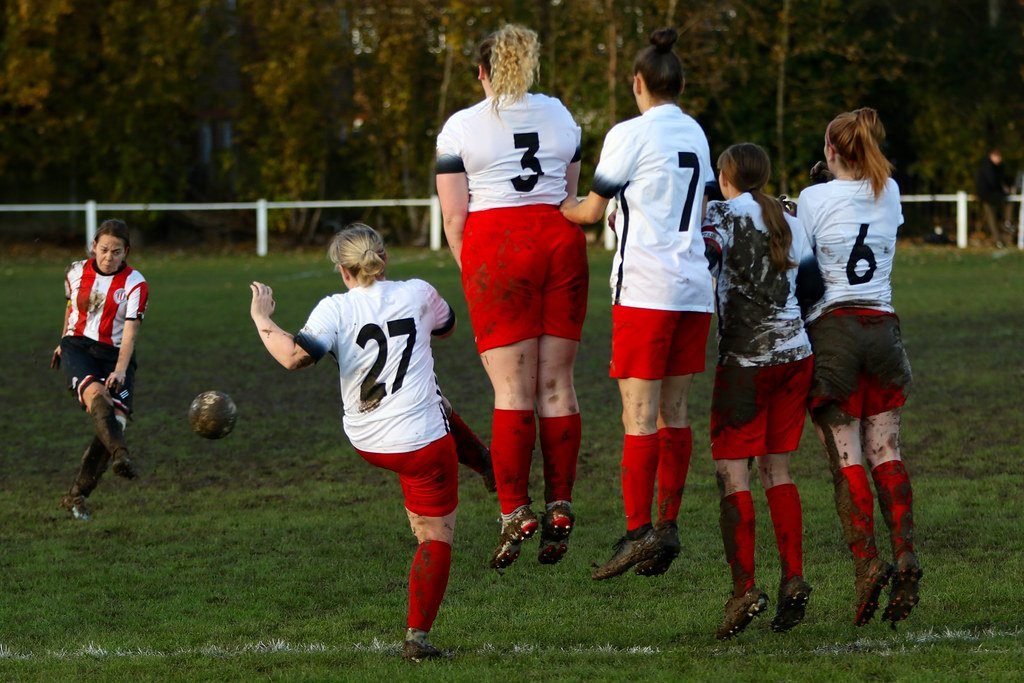 Clapton CFC women’s team lost out in a seven-goal thriller that was a far higher quality clash than the mudbath conditions suggested.

The first 20 minutes proved relentless with four goals scored during a period in which both teams had to adapt to the very challenging surface.

Despite the Tons starting brightly – hitting both posts in the same move in the first two minutes – it was the visitors who appeared to acclimatise quicker.

Islington Borough netted with their first shot of the game from Fiona Smith into Sophia Axelsson‘s top corner.

They soon poked home a second from close range from Ashley Fletcher and then made it 3-1,  Chloe Copsey squeezing another in at the near post.

In between free-kick specialist Ciara Monahan had clawed Clapton back into it with a brilliant 20 yard strike into the top left corner.

The Tons captain put her laces through it and leathered the ball past her sprawling opponent.

Having grown back into the game again, Clapton were then set further back just before half-time, as Islington Borough scored a fourth from the penalty spot – Axelsson agonisingly close to a save from Carrie-Anne Layton.

Having to play catch up in extremely labouring conditions, the home side could have been forgiven for feeling a bit demoralised with Borough restoring their 3 goal advantage so close to halftime.

Elena Holmes was having none of it though.The winger grabbed her first goal of the season and Clapton went in at the break extremely muddy, but back in with a shout.

The second half descended into battle just to scoop the ball out of an increasingly muddy middle of the pitch and towards either goal.

Barring Clapton a ball being cleared off the line from a corner and a good break from Naomi Scriven, any attack was soon consumed by the mud.

It looked like the game was drifting away from the Tons, with a quarter of an hour left, despite a dogged effort to haul themselves forward, until the ref awarded a free-kick just inches outside of the area.

Monahan is in such a vein of form at the moment that a dead ball anywhere near the opposition box is as good as a penalty. So it proved as the muddy midfield warrior rattled in her subsequent free-kick.

Unlike her first half strike which was a straight shooting powerdrive, Monahan’s second effort was a cultured chip which clipped in off the left-hand post.

Islington Borough attempted to rescue to ball which had already crossed the line, but the ref and his assistant were confident in their call.

After which, with about ten minutes left, the momentum of the game pivoted fully in Clapton’s favour when the visitors were reduced to ten following a sin-binning of Layton.

Link, scorer of eight friendly goals and two in the league in just four appearances in the summer, started brightly with a couple of runs in behind the Borough defence.

The stage was set for a grandstand finish at the Stray Dog, but for the increasingly boggy conditions in the middle of the park.

With one final push, Link broke into the box down the left, crossed to Saskia Walker who had surged up from right-back. Firing a strong shot on the half-volley, the ball went agonisingly just over.

Some torturously sticky play in the now boggy pitch brought the game to an end, with Islington dragging the 3 points back to North London.

The energy-sapping defeat leaves CCFC in midtable in the Greater London Women’s Football League Division One, but with much to feel positive about.

Another fantastic captain’s performance from Monahan, as well as Link’s return to the team will put an extra shine on a spirited comeback.

Two goals swing it for Monahan but it’s close run with centre-backs Annika Quartey and Parthews.