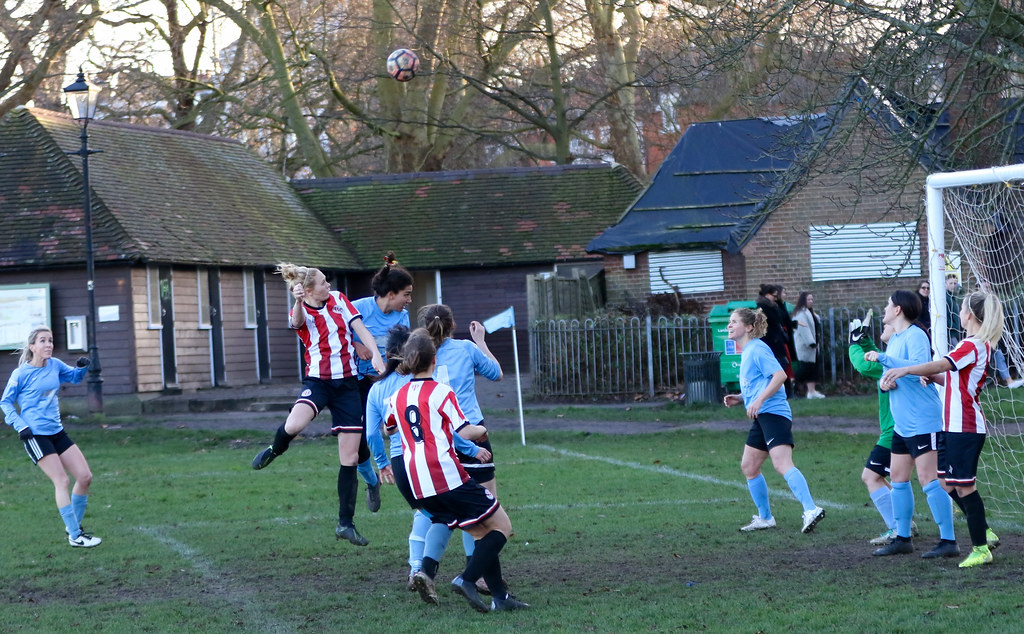 Anticipation ran high as the travelling squad and supporters arrived at Clapham Common.

The last time our women’s team won a game was on 13 October. They won 5-2, and it was against Comets.

Coach Patrick McLaughlin made only one change in the starting XI, with captain Ciara Monahan, back from illness, coming on for injured Zhane Amoaten.

Comets had the first chance three minutes into the game, but Susana Ferreira had no issues in dealing with their shot.

After that, Clapton dominated the game. After just five minutes of play, captain Ciara Monahan plays a great ball which reaches Naomi Scriven. Scriven beats the defenders, but the shot hits the post.

Five minutes later, it is Phoebe Parthews’ time to find Scriven with a lovely through-ball, and this time, Naomi does find the back of the net. 1-0 to the Tons!

Clapton continues to push forward, with Lucy Rolington being given a chance from a corner kick which goes just wide, and Naomi attempted a bicycle kick which landed just in front of the Comets goalkeeper.

25 minutes into the game, Monahan is pushed in the back. The referee missed it, and Comets took advantage. Their striker sent a ball over the head of Ferreira, and with that, they were back in the game. 1-1.

6 minutes later, a rare missed pass by solid defender Parthews provided Comets’ striker with another chance. The shot hit the bar, but with luck on their side, it bounced into the back of CCFC’s net. 2-1.

To get back into the game, two substitutions are made before the first half is over. Elena Holmes comes on for Saskia Walker, who is injured in a collision with a Comets player, and Hannah Wright comes on for Alice Williams.

The second half started much like the first, with Clapton being the stronger side. 10 minutes in, Rolington found Holmes whose shot went just over the bar.

There was also good link-up between right-back Wright and Scriven. In the first fifteen minutes of the half, both Emily Link and Scriven had good chances to equalise the score.

Not much later, Comets are awarded a corner and they managed to head it in at the near post. 3-1 down, and Clapton was pressured very deep down their own half.

With just over 30 minutes left on the clock, there was some confusion in front of the Tons goal, and Comets manage to score yet another one. This seemed to wake up Clapton, who once again pushed up the pitch.

Clapton were awarded a corner, which Monahan placed perfectly into Comets’ box. It found Link, who headed it just over.

Just after that, Ferreira outsmarted the Comets striker in a one vs one situation.

With the Tons concentration levels up, they made one last push up the pitch.

Naomi ran down the right wing, and with an expertly placed cross found Link in the box, who fought to get it past Comets defenders and goalkeeper. 4-2.

Too little too late?

Comets made their last substitution of the game – a rare change of goalkeeper.

As it turned out, their ‘keeper was actually one of their left-wingers, and the player taking over for the last few minutes of the game was also a winger.

In the dying minutes of the game, the Tons were awarded a free kick, and captain Monahan stepped up to the ball. Her effort went just over the bar.

Despite CCFC’s strong start and their gallant efforts to pull the game back in the last minutes, it wasn’t enough this time.

Next week they are back at Match Day Centres in Walthamstow for a game against Dulwich Hamlet Reserves, and they will need to pull out all the stops to get back to their winning ways.

Naomi Scriven stood out with her tireless running up and down the right wing.